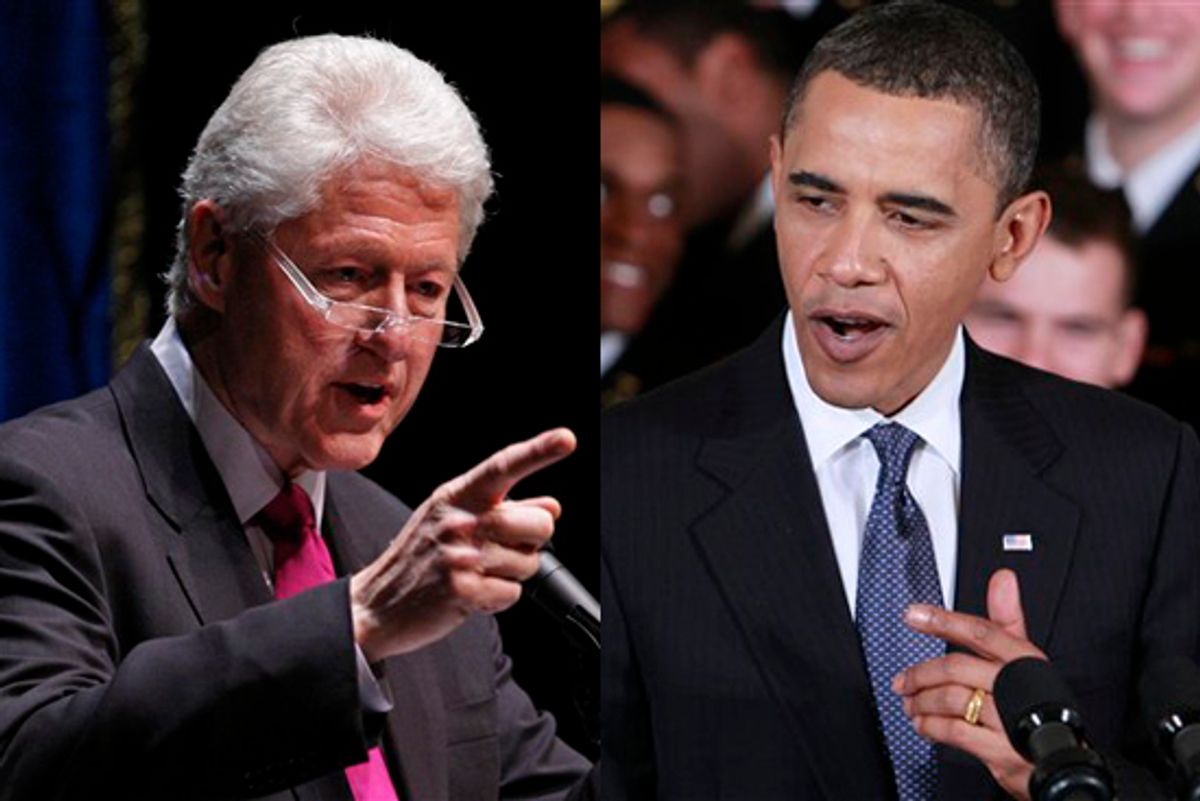 FILE - In this Feb. 24, 2010 file photo, former President Bill Clinton speaks at the University of California at Berkeley, in Berkeley, Calif. Clinton warned of a slippery slope from angry anti-government rhetoric to violence like the 1995 Oklahoma City bombing, saying "the words we use really do matter." (AP Photo/Ben Margot, File) (Ben Margot)
--

A preemptive warning about the significance of Ohio, Indiana and North Carolina, where U.S. Senate primaries are being held today: Even if Democrats lose in all three states this fall -- something that is very possible -- it probably won't say much about President Obama's 2012 prospects.

Not that you'll get this impression from most of the media over the next six months. Already this morning, MSNBC has aired a segment on what the elections in these states -- all of them traditionally Republican battlegrounds that Obama won over in 2008 -- mean for the president's re-election.

You can see where this is going: If and when Obama's party gets pasted in the '08 battleground states this fall, it will unleash a flood of stories about how he's lost the swing voters who put him in the White House. (We got a preview of this last year, with the reaction to the GOP's victory in Virginia's gubernatorial race.)

But as the last Democratic president (and many other presidents before him) showed, midterm results are often harbingers of nothing. Just consider the dire conclusions that were drawn about Bill Clinton's reelection prospects after the 1994 midterms, when his party lost competitive Senate races in six states that he had flipped in his 1992 victory: Pennsylvania (Rick Santorum over Harris Wofford); Michigan (Spencer Abraham over Bob Carr); Missouri (John Ashcroft over John Wheat); Ohio (Mike DeWine over Joel Hyatt); Maine (Olympia Snowe over Tom Andrews); and Tennessee (Bill Frist over Jim Sasser and Fred Thompson over Jim Cooper).

Each of those states had voted Republican in the 1988 presidential election, only to be won over by Clinton in 1992. And each then revolted in '94, sending a Republican (or in the case of Tennessee, two Republicans) to the Senate. And then? Each returned to the Democratic fold in 1996, siding with Clinton -- by lopsided margins, in some cases -- over Bob Dole.

As I've written before, a brutal 2010 midterm for Obama and the Democrats has been pretty much inevitable since the '08 election. Midterms are inherently about "buyer's remorse," and that remorse is only amplified when unemployment is near 10 percent and when the president's party enjoys big congressional majorities. This means it will be an upset for Obama's party win even one Senate race between Ohio, Indiana and North Carolina this fall. But that says all of nothing about 2012.