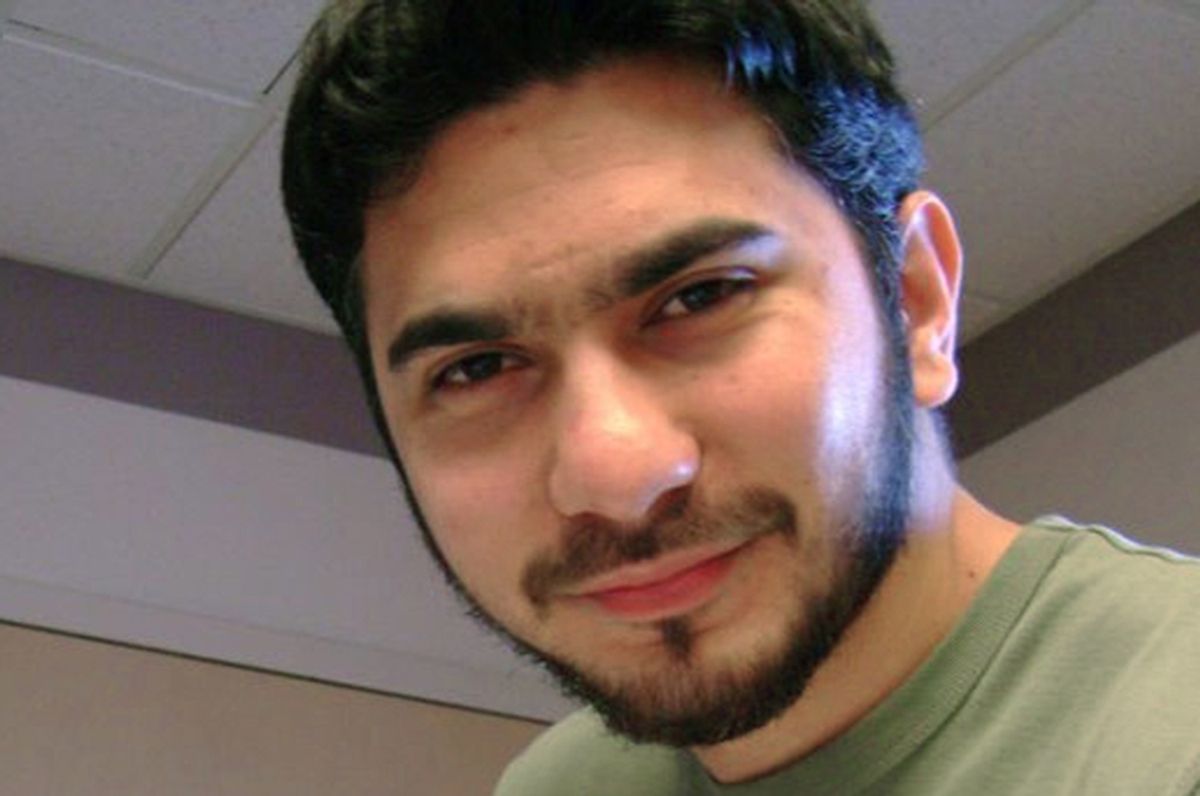 This undated image, obtained from orkut.com on May 4, 2010, shows Faisal Shahzad, the Pakistani-American who is suspected as the driver of a bomb-laden SUV into New York's Time Square on May 1. Shahzad, a naturalized U.S. citizen born in Pakistan, was arrested late on May 3 at John F. Kennedy International Airport by FBI agents in New York as he tried to take a flight to Dubai, local and federal officials said. REUTERS/Courtesy of Orkut.com/Handout (CRIME LAW DISASTER IMAGES OF THE DAY) FOR EDITORIAL USE ONLY. NOT FOR SALE FOR MARKETING OR ADVERTISING CAMPAIGNS (Â© Ho New / Reuters)
--

The bloggers at National Review's The Corner can barely conceal their glee that the man arrested this morning for attempted terror is a proper foreign-born Muslim dude, and not a God-fearing white Christian. Jonah Goldberg admits as much:

When the Times Square story first broke there was a part of me that said, "Man, I hope it's not some white militia nutjob." When I saw the news this morning that it was a Pakistani, the same small part of me was relieved.

A normal human might be relieved that the person responsible for the attempted bombing is in custody. Jonah is just relieved that his prejudices against Muslims were reinforced.

Jonah excuses this response by linking to white race aficionado Robert Stacy McCain, who successfully found a liberal blogger who preemptively speculated that the attempted Times Square bombing was carried out by a "Beck Patriot." So, there you go: Definitive proof that the Liberals Started It.

Except people did not just leap to blame a white guy because they hate white guys so much. People were speculating about a white guy because New York City Police Commissioner Ray Kelly told everyone that a white male in his 40s was the primary suspect. Mr. Kelly is not exactly Mr. Political Correctness! Just ask all the black males his NYPD keeps stopping and frisking (and arresting for marijuana possession).

So, to recap: Liberal blogger speculates on the motives of a white attacker, based on public statements by the NYPD. Muslim man is arrested. Jonah Goldberg writes a post about how liberals are not sufficiently frightened of or frightening about Muslims, and also they are "undemocratic" for pointing out that white Christians also commit crimes.

This is the single most Jonah Goldbergy part of the whole thing:

A lot of liberals seem very keen to minimize or dismiss the reality of Islamic terrorism while working devilishly hard to create a false reality that the real threat is from American citizens.

Of course, a reader had to point out to Jonah that Faisal Shahzad, the man in custody, is an American citizen. But he totally doesn't count! Because he's a Muslim American citizen who hates America.

Hilariously, Mark Steyn made Jonah Goldberg's point much more succinctly and, if possible, even more stupidly, an hour before Jonah posted his rambling thoughts.

Whenever something goofy happens -- bomb in Times Square, mass shootings at a US military base, etc. -- there seem to be two kinds of reactions:

a) Some people go, "Hmm. I wonder if this involves some guy with a name like Mohammed who has e-mails from Yemen."

b) Other people go, "Don't worry, there's no connection to terrorism, and anyway, even if there is, it's all very amateurish, and besides he's most likely an isolated extremist or lone wolf."

Unfortunately, everyone in category (b) seems to work for the government.

That's funny! Because I have noticed that whenever something "goofy" happens -- someone flies a plane into an IRS building, someone murders an abortion doctor, someone on Staten Island attacks a black teenager while shouting "Obama!" etc. -- there seem to be two kinds of reactions:

a) Some people go, "Hmm, it seems like domestic right-wing extremism is a legitimate problem and something we should be trying to combat."

b) Other people ignore it and wait for an Arab person to commit a crime so they can go, "HEY LOOK A MUSLIM TRIED TO BLOW SOMETHING UP LOOK OVER THERE!"

Fortunately, everyone in category (b) seems to write for The Corner.

In Mark's defense, it's just really easy to take the thousands of violent crimes committed for reasons related to politics or religion or tribal identification and cherry-pick just the ones that make your political point.

But I do I have a question for Mr. Steyn: Do you seriously think option (a) every time something "goofy" happens? Do you blame "some guy with a name like Mohammed" for towing your car? For Siobhan getting kicked off "American Idol"? For "Furry Vengeance"?

(And what a charming way to refer to Muslims! From now on instead of saying "white Christian," I'm going to say "some guy with a name like Mark who has e-mails from Canada.")