Naturalized U.S. citizen had returned from five-month trip to Pakistan, where he had a wife, according to officials 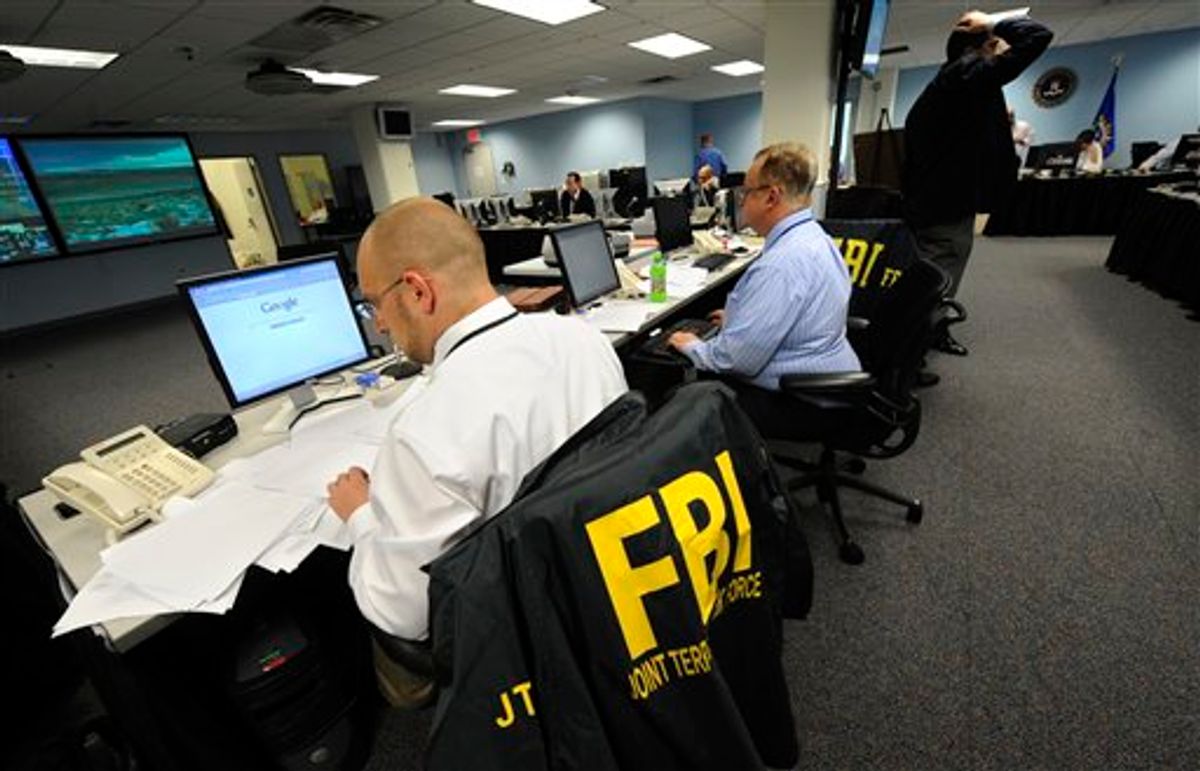 Agents from the FBI and other law enforcement agencies work at a 24-hour operations center at FBI headquarters, Monday, May 3, 2010, in the Chelsea section of New York. The center was set up to coordinate the investigation of the Times Square incident involving a vehicle loaded with explosive material. (AP Photo/ Louis Lanzano) (AP)
--

A Pakistani man believed to be the driver of an SUV used as a car bomb in a failed terror attack on Times Square was taken into custody late Monday by FBI agents and local police detectives while trying to leave the country, U.S. officials said.

The suspect, Faisal Shahzad, was identified by customs agents at John F. Kennedy International Airport at about 11:45 p.m. Monday and was stopped before boarding an Emirates airlines flight to Dubai, according to U.S. Attorney General Eric Holder and other officials. Shahzad is a naturalized U.S. citizen and had recently returned from a five-month trip to Pakistan, where he had a wife, according to officials who spoke to The Associated Press early Tuesday on condition of anonymity because of the sensitivity of the investigation.

Shahzad was being held in New York and couldn't be contacted. He has a Shelton, Conn., address; a phone number listed there wasn't in service. Investigators were searching his home.

The U.S. attorney's office for the Southern District in Manhattan will handle the case and said Shahzad would appear in court Tuesday on formal charges, but those charges were not made public.

Holder said the U.S. "will not rest until we have brought everyone responsible to justice," suggesting additional suspects are being sought.

Law enforcement officials say Shahzad bought the SUV, a 1993 Nissan Pathfinder, from a Connecticut man about three weeks ago and paid cash. The officials spoke to the AP on condition of anonymity because of the sensitive nature of the case.

Police said the bomb could have produced "a significant fireball" and sprayed shrapnel with enough force to kill pedestrians and knock out windows. The SUV was parked on a street lined with restaurants and Broadway theaters, including one showing "The Lion King," and full of people out on a Saturday night.

The vehicle identification number had been removed from the Pathfinder's dashboard, but it was stamped on the engine, and investigators used it to find the owner of record. The discovery was paramount to the investigation.

"The discovery of the VIN on the engine block was pivotal in that it led to the identifying the registered owner," said Paul Browne, chief New York Police Department spokesman. "It continues to pay dividends."

Officials say the SUV's registered owner, whose name has not been released, was not considered a suspect in the bomb scare.

Investigators tracked the license plate found on the rear of the SUV to a used auto parts shop in Stratford, Conn., where they discovered the plate was connected to a different vehicle.

They also spoke to the owner of an auto sales shop in nearby Bridgeport because a sticker on the Pathfinder indicated the SUV had been sold by his dealership. Owner Tom Manis said there was no match between the identification number the officers showed him and any vehicle he sold.

As the SUV buyer came into focus, investigators backed off other leads. They had initially wanted to speak with a man apparently in his 40s who was videotaped shedding his shirt near the Pathfinder. Officials said it's possible he was just a bystander.

The motive remained unclear. The Pakistani Taliban appeared to claim responsibility for the bomb in three videos that surfaced after the weekend scare, monitoring groups said. New York officials said police have no evidence to support the claims. It was unclear if the suspect in custody had any relationship to the group.

The SUV was parked near offices of Viacom Inc., which owns Comedy Central. The network recently aired an episode of the animated show "South Park" that the group Revolution Muslim had complained insulted the Prophet Muhammad by depicting him in a bear costume.

The date of the botched bombing, May 1, was International Workers Day, a traditional date for political demonstrations, and thousands had rallied for immigration reform that day in New York.

Security also had been tight in the city in advance of a visit to the United Nations by Iranian President Mahmoud Ahmadinejad at a nuclear weapons conference.

The SUV was captured on video crossing an intersection at 6:28 p.m. Saturday. A vendor pointed out the Pathfinder to an officer about two minutes later. Times Square, clogged with tourists on a warm evening, was shut down for 10 hours. A bomb squad dismantled the explosive device, and no one was hurt.

The explosive device had cheap-looking alarm clocks connected to a 16-ounce can filled with fireworks, which were apparently intended to detonate the gas cans and set the propane afire in a chain reaction, police Commissioner Raymond Kelly said.

A metal rifle cabinet placed in the cargo area was packed with fertilizer, but NYPD bomb experts believe it was not a type volatile enough to explode like the ammonium nitrate grade fertilizer used in previous terrorist bombings.

The amount of fertilizer was unknown. Police estimated the cabinet weighed 200 to 250 pounds when they pulled it from the vehicle.

President Barack Obama telephoned handbag vendor Duane Jackson on Monday to commend him for alerting authorities to the smoking SUV. The White House said Obama thanked Jackson, of Buchanan, N.Y., for his vigilance and for acting quickly to prevent serious trouble.