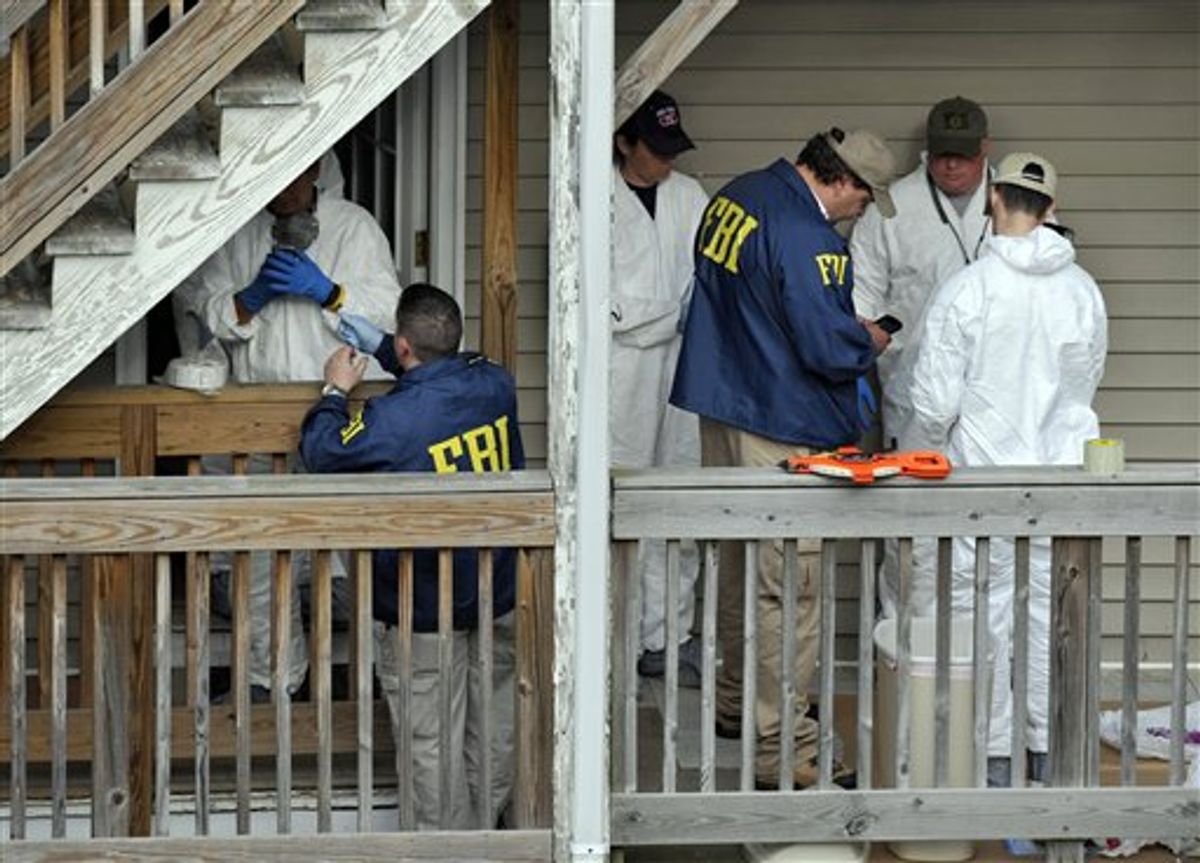 A law enforcement official says the man accused of driving a bomb-laden SUV into Times Square was arrested on board a flight set to leave a New York airport for Dubai.

The official familiar with the investigation tells The Associated Press that Faisal Shahzad (FY'-sul shah-ZAHD') was taken into custody aboard the flight at Kennedy International Airport. The official spoke on condition of anonymity because of the sensitivity of the investigation.

The official says investigators still don't have evidence that Shahzad is connected to the Pakistani Taliban or any foreign terror groups. The official says, "He's claimed to have acted alone, but these are things that have to be investigated."

NEW YORK (AP) -- A U.S. citizen who had recently returned from a five-month trip to his native Pakistan, where he had a family, was arrested at a New York airport on charges that he drove a bomb-laden SUV meant to cause a fireball in Times Square, federal authorities said.

The suspect, Faisal Shahzad, was taken into custody late Monday by FBI agents and New York Police Department detectives at Kennedy Airport while trying to board a flight to Dubai, according to U.S. Attorney General Eric Holder and other officials. He was identified by customs agents and stopped before boarding, Holder said early Tuesday in Washington.

U.S. authorities "will not rest until we have brought everyone responsible to justice," Holder said, suggesting additional suspects are being sought.

Shahzad, 30, is a naturalized U.S. citizen and had recently returned from a five-month trip to Pakistan, where he had a wife, according to law enforcement officials who spoke to The Associated Press on condition of anonymity because of the sensitivity of the investigation into the failed car bombing.

The U.S. attorney's office in Manhattan was handling the case and said Shahzad would appear in court Tuesday, but the charges were not made public. FBI agents searched the home at a known address for Shahzad in Bridgeport, Conn., early Tuesday, said agent Kimberly Mertz, who wouldn't answer questions about the search.

Authorities removed filled plastic bags from the house overnight in a mixed-race, working-class neighborhood of multi-family homes in Connecticut's largest city. A bomb squad came and went without entering as local police and FBI agents gathered in the cordoned-off street.

Shahzad was being held in New York overnight and couldn't be contacted. A phone number at a listed address for Shahzad in Shelton, Conn., wasn't in service.

He used to live in a two-story grayish-brown Colonial with a sloping yard in a working-class neighborhood in Shelton. On Tuesday morning, the home looked as if it had been unoccupied for a while, with grass growing in the driveway and bags of garbage lying about.

Neighbors offered diverging descriptions of Shahzad but agreed that he kept to himself. One, Brenda Thurman, said Shahzad had told her husband he worked on Wall Street, while another neighbor, Audrey Sokol, said she thought he worked in nearby Norwalk.

Thurman, 37, said he lived in Shelton with his wife and two small children until last year.

"He was a little bit strange," she said. "He didn't like to come out during the day."

Sokol, a teacher who lives next door to Shahzad's old house, said that he would wave and say hello and that he seemed normal to her.

Law enforcement officials say Shahzad bought the SUV, a 1993 Nissan Pathfinder, from a Connecticut man about three weeks ago and paid cash. The officials spoke to the AP on condition of anonymity because of the sensitive nature of the case.

The vehicle identification number had been removed from the Pathfinder's dashboard, but it was stamped on the engine, and investigators used it to find the owner of record, who told them he had sold the vehicle to a stranger. As the SUV buyer came into focus, investigators backed off other leads.

The SUV was parked on Saturday night on a busy midtown Manhattan street near a theater showing "The Lion King." The explosive device inside it had cheap-looking alarm clocks connected to a 16-ounce can filled with fireworks, which were apparently intended to detonate gas cans and set propane tanks afire in a chain reaction "to cause mayhem, to create casualties," police Commissioner Raymond Kelly said.

A metal rifle cabinet placed in the SUV's cargo area was packed with fertilizer, but NYPD bomb experts believe it was not a type volatile enough to explode like the ammonium nitrate grade fertilizer used in previous terrorist bombings.

Police said the SUV bomb could have produced "a significant fireball" and sprayed shrapnel with enough force to kill pedestrians and knock out windows.

A vendor alerted a police officer to the parked SUV, which was smoking. Times Square, clogged with tourists on a warm evening, was shut down for 10 hours. A bomb squad dismantled the explosive device, and no one was hurt.

"It's clear," he said, "that the intent behind this terrorist act was to kill Americans."

Authorities did not address Shahzad's plans in Dubai. The airport there is the Middle East's busiest and is a major transit point for passengers traveling between the West and much of Asia, particularly India and Pakistan.

Dubai-based Emirates airline confirmed in an emailed statement to the AP that three passengers were pulled from Flight EK202, which was delayed for about seven hours. The airline did not identify Shahzad by name or identify the other two passengers.

The aircraft and passengers were then re-screened before taking off Tuesday morning, and the airline is "cooperating with the local authorities," Emirates said in a statement.

President Barack Obama was told of the arrest shortly after midnight, according to press secretary Robert Gibbs.

In Pakistan, Interior Minister Rehman Malik said authorities had not been formally asked for help in the probe.

"When the request comes, we will cooperate with the U.S. government," he told the AP.

The Pakistani Taliban appeared to claim responsibility in videos that surfaced after the weekend scare, monitoring groups said, but police had no evidence to support the claims.

More than a dozen people with American citizenship or residency, like Shahzad, have been accused in the past two years of supporting or carrying out terrorism attempts on U.S. soil, cases that illustrate the threat of violent extremism from within the U.S.

Among them are Army Maj. Nidal Hasan, a U.S.-born Army psychiatrist of Palestinian descent, charged with fatally shooting 13 people last year at Fort Hood, Texas; Najibullah Zazi, a Denver-area airport shuttle driver who pleaded guilty in February in a plot to bomb New York subways; and a Pennsylvania woman who authorities say became radicalized online as "Jihad Jane" and plotted to kill a Swedish artist whose work offended Muslims.