The long-haired Texan stumbles in his rendition of "Blue Eyes," but others get Frank's swagger just right 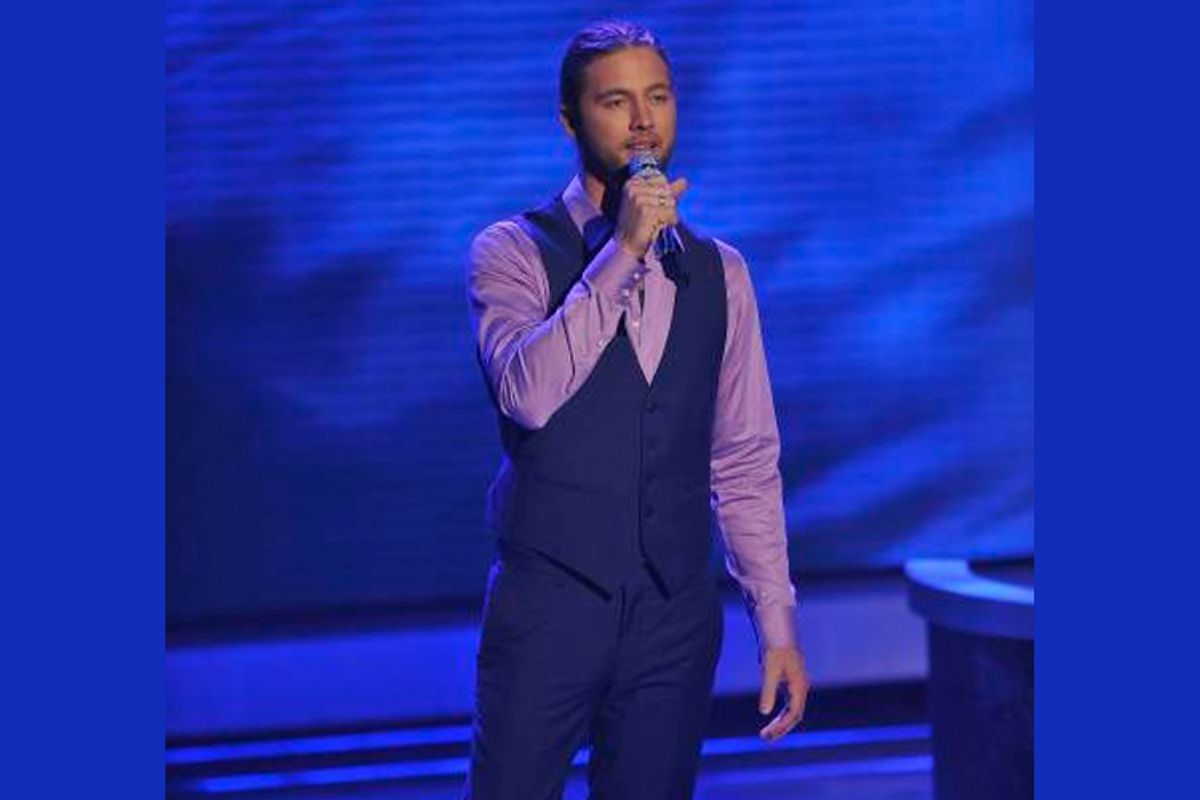 Tuesday night’s "American Idol" featured the music of ole blue eyes, Frank Sinatra. Now, most know that Frank Sinatra is a legend, one of the original Rat Pack and, most importantly, Simon’s favorite singer of all times.

But my first question was, "How will these contestants know who Frank Sinatra was and, the challenge, how would they be able to 'get' him?" Did they need a quick course in Sinatra 101? Was there a time capsule available so these contestants could go back sixty years to try to 'get' him? Did someone need to explain to them what a "crooner" was?

I felt a big time set up coming on for those innocent unsuspecting contestants who had dazed looks on their faces. But those "American Idol" producers are smart cookies. They brought in as mentor, the infamous Harry Connick Jr., the closest contemporary singer to Sinatra.

Aaron Kelly was first and Harry put him right at ease by calling him "Big Mike." Turns out that Harry was a real jokester. But his humor turned out to be an instant Valium for the young contestant as well as his helpful instruction, a rarity among the "American Idol" mentors this year.

Aaron sang "Fly Me to the Moon." Let’s just say that Aaron, who had a new haircut and looked like Dennis the Menace, didn’t do a half bad job. He had a few off-tune moments, was a bit shaky at times but he took off mid-song. There was a slight creepiness in watching this virginal child trying to look and act all Frank Sinatraish and I wouldn’t have been surprised if he’d pulled out a cigarette before the song was done. At the end, it was Rat Pack meets Mickey Mouse and Aaron got caught in a trap (or was that Elvis night?).

Ellen: "I thought the piano was a little pitchy, but I do think it was great, beautiful vocals and not country at all." Was Ellen trying to crack a joke with that pitchy piano line? Ellen was no match for Connick.

Kara (who was newly spray tanned): "It wasn’t as strong as last week. Frank Sinatra wasn’t as tall as you (hmm, would we call Aaron 'tall'?) and he filled up the stage with his voice. You’re not there." Seriously, Kara’s comparing Baby Aaron to the great Sinatra? There must be some seriously intense chemicals in that spray on tanning stuff.

Casey James: Harry was a straight shooter with Casey poking a little fun at him at the same time. "Casey, how can I make this more CLEAR?" he asked as he hit a single note on the piano. Apparently, nowhere near clear enough.

Casey sang "Blue Skies" and I wanted it to rain. Anything to drown out the sound of Casey's pitchy and consistently off key notes from beginning to end. Sinatra was rolling over in his grave. Casey was horrific and seemed to know it because he was smiling and smirking like he was thinking, "Damn, I am busted for sure. Knew I should have practiced more because I seriously suck right now." This was Casey’s worst performance. He knew it, I knew it, the judges knew it. Hell, even Casey’s mother knew it.

Randy: "Yo, oh, yo, oh, yo, (laughing) dude (more uncomfortable laugher), I gotta tell you something, this was your worst performance. It was pitchy until the last note maybe. You were out of your element."

Ellen: "Bad idea to have the piano on stage." Ellen needed to stop with the piano bit. It sucked worse than Casey’s performance.

Kara and Simon concurred with Randy and Ellen.

Crystal Bowersox: Crystal said the song she chose meant something to her. Harry didn’t know what she meant and that she was being obscure but he liked that about her.

Crystal sang "Summer Wind." Crystal looked beautiful and had a titch of the female swagger going on in her long flowing gown. I loved her performance. Her voice was smooth and soothing and I could tell, the song meant something to her! But I also missed the "old" Crystal, the one so many of us fell in love with.

Randy: "I don’t know, it was one of your more subdued performances, a little sleepy."

Ellen: "At first, it felt like you were swallowing every word and then you started singing and I wanted to see a little more of you loosen up." Ellen was suddenly serious music critic. Where was the piano when you needed it?

Simon: "I love the song but it felt a little indulgent, too jazzy, too night clubbish but the second half got a lot better. It wasn’t one of your strongest performances. IF you survive next week, you’ll have to bring it on. I expect better."

Did anyone notice that? That Simon seemed to be warning Crystal? The same Simon who has been pimping her all season? Strange. Crystal didn’t notice because she was involved in her weekly argument with the judges. That woman is intimidated by no one.

Michael Lynche: Harry found out that Big Mike was singing "The Way You Look Tonight" and encouraged him to sing it like he meant it. "If you’re going to be direct with your girl, you say, 'You look friggin gorgeous.'"Big Mike looked confused but then again, he’s not married to a former Victoria Secret model.

As usual, Big Mike had some great vocals. All the song arrangements were the creations of Mr. Connick who also played the piano for the contestants. The arrangements were fantastic and Big Mike belted out the song believably enough. One could even say he was a crooner.

Randy: "Unbelievable arrangement unbelievable vocal. Mike is in it to win it. Mike, you threw down the gauntlet baby."

Kara: "You found the drama in the song, you took us up and down, took us on the journey. You still did things that reminded me that it’s still Big Mike."

Lee Dewyze: Harry told Lee his wife thought Lee was cute. Lee suddenly came out of his long hibernation and came to life. What a big broad smile Lee had! Harry thought that Lee was a "new and improved version of me." I think Hot Harry was being incredibly gracious.

Lee sang "That’s Life" and he was the closest thing to Harry or Frank all evening. His voice wasn’t pitchy, he had a suave kind of loose tie kind of relaxed look, starting off on the stool and eventually standing, kicking it and swaggering around. He was a cool cat singing that song.

Ellen: "I have to be honest. At first I was distracted by Harry’s organ which was different than the piano." Inappropriate Ellen. This is a family show! Ellen concluded, "If this was the last night of performances, you would have just won this whole thing."

Ellen is a rookie and doesn’t know about the power of the quirky tween voter.

Simon: "What I really liked and Harry, you’ve been absolutely incredible tonight working with the contestants…what you’ve managed to do for Lee tonight…he started off at a paint shop and full of shyness and you brought out his personality and confidence and what I really love is that Lee, you gave it 110 percent and it was by far the best performance of the night."

Lee was beaming and Harry was a Savior. In fact, Harry upstaged all the contestants on Tuesday night.

My Top 3: Lee, Crystal and Mike

Bottom 2: You do the math. But since I’ve been correct exactly 0% of the time when it comes to predicting who will go home, I’m going out on a limb. I think when it comes to the American voter, Big Mike is in limbo and he’s going to be sent packing tomorrow.

But it should be Casey. Anyone this far along at this stage of the competition should never sing an entire song off key and their punishment needs to be swift and sure.

If Sinatra were still alive, he’d know a Gambino or two who could take care of the matter in no time.