Should you avoid Gulf seafood?

Stock up on those shrimp: Here's why you don't need to worry about oil toxins in your fish 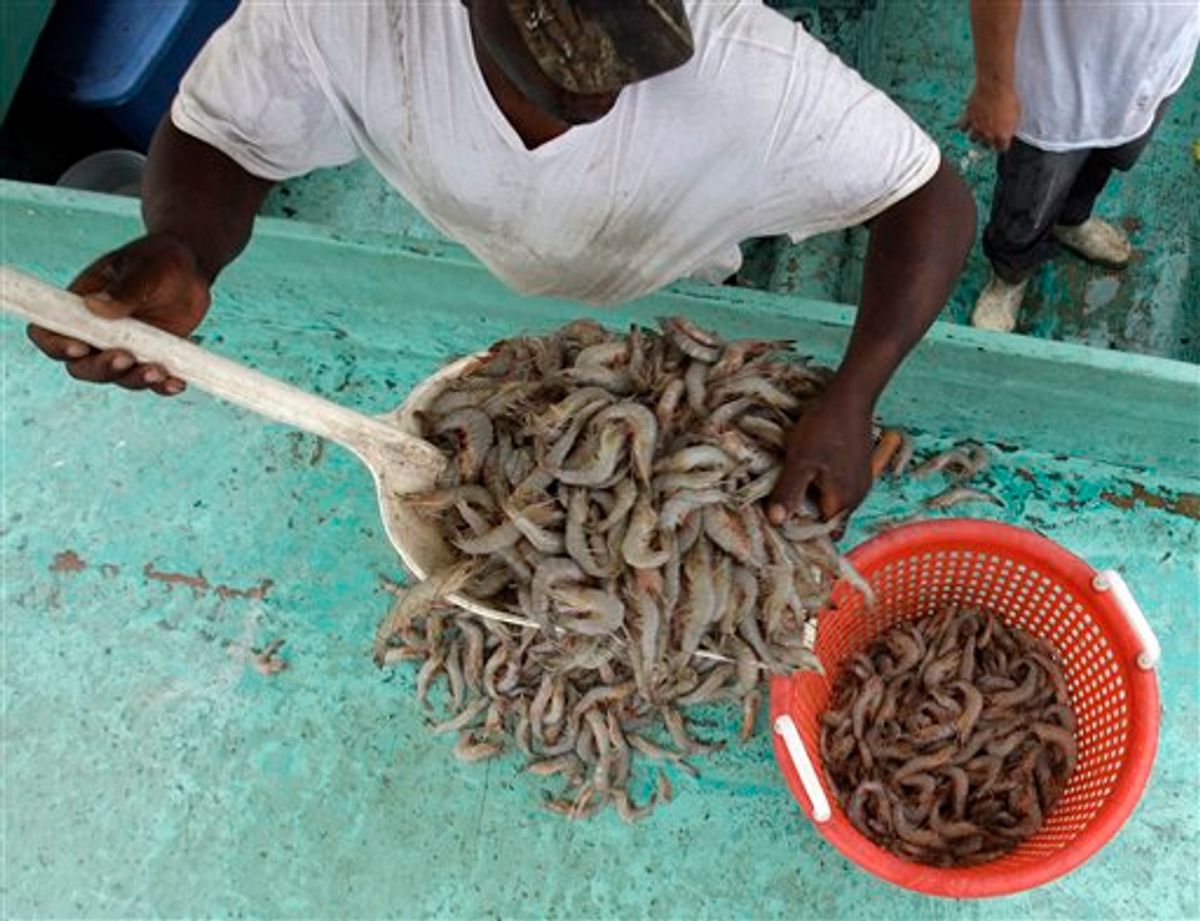 Hosea Wilson loads shrimp from their catch into a basket, Monday, May 3, 2010, at the Venice Marina in Venice, La. NOAA has restricted commercial and recreational fishing in oil-affected portions of the Gulf of Mexico. Their boat has been recruited to aid with the oil spill clean up efforts. (AP Photo/Eric Gay) (AP)
--

From certain angles, the Gulf oil spill is making it look like boom times for shrimp fishermen along the Gulf Coast. Barely hour after opening the Crescent City Farmer's Market in New Orleans yesterday, vendors were nearly sold out. Todd Rosetti, owner of Quality Poultry and Seafood in Biloxi, MS, tells me he can't keep enough stock in his warehouse. But when I called him, he answered my greeting of "How's it going?" with a terse "For shit." I met Todd a couple of years ago, when I did a series of oral histories on shrimping culture in Biloxi, and he usually talks with a measured, polite calm, but his voice betrayed his stress. He's not sure how long he'll be able to get shrimp to sell, and how long people are going to want it.

The damage the oil will cause to the Gulf ecology and economy is, of course, still unknown. As Mike Madden reported for Salon, many fishermen are stuck waiting for an all-clear to go fish, while the mortgage bills on their boats stack up. But even for the fishermen who survive what the black goop hath wrought (and, battered by decades of cheap imported shrimp and barely hanging on after Hurricane Katrina, there may not be many), the gravest damage to the Gulf fishing industry may be, like the oil spill itself, man-made: a market hollowed out by fear of contaminated seafood, even if it's actually safe to eat.

Right now, there is a surge in What-if-I-Can't-Have-It-Anymore Gulf seafood sales; spurred on by reports of impending oilpocalypse, fans of the stuff are loading up for their last hurrahs. A friend who stopped by the Crescent City market saw people filling coolers destined for their freezers; a friend of his bought 20 pounds of shrimp -- 10 for herself, and 10 for her friend on jury duty. But for shrimpers, this is a good thing that's also a bad sign, because the more the anticipation of Gulf Shrimp Armageddon grows, the more likely we are to eventually turn and believe that whatever Gulf seafood that makes it to the market is tainted.

The misunderstanding would be easy to understand. After a string of widely publicized food safety failures in recent years -- from E. Coli spinach to all manner of ground beef badness -- consumers are already jittery about food that comes from seemingly wholesome places, and "75% of the Gulf is still clean!" is not the kind of PR slogan that's going to get a lot of traction. And then there's the fact that the closing of fishing grounds is actually a bit more complex than is usually reported. Concerned about oil contamination, the National Oceanic and Atmospheric Administration (NOAA) declared an open-ended hold of at least 10 days on all fishing in an area of Federally-controlled waters between eastern Louisiana to Pensacola Bay in Florida. (Click here for a map of the closed area.) I had to say that again, slowly, three times before I caught all that, with the important caveats -- like fishing still being legal and safe in the closer-to-shore State-managed waters. But boil it down to a media-friendly headline, like "Gulf Fishing Closed from Louisiana to Florida," and you can see where people will start thinking there's no safe fishing in the Gulf at all, and even legal, NOAA-inspected catches will be shunned in the market.

That's what worries Frank Parker most. Frank is a seventh-generation fisherman in Biloxi, possessed of a swagger and optimism I didn't see elsewhere among Gulf fishermen. "I'm one of the aces in this business," he said to me, proud of his ability to make it in shrimping after Katrina, when many captains were hanging up their galoshes for good. He's confident his ace-ness will carry him through this oil spill, too, since he knows the spots to fish that are expected to be unthreatened by oil, spots in the area that produces 77% of Louisiana's shrimp catch anyway. But what he can't control is whether people will buy his catch. "Oyster season, for instance, always closes around the end of April. It just coincided with the oil spill this year, so the media jumped on it, and that caused a frenzy of people thinking that they closed the oyster season because of contamination. I will worry if we do get some kind of oil, but I'm really worried if they open the shrimp season and the public still thinks the seafood is tainted."

Dr. Jim Cowan, a professor in the Department of Oceanography and Coastal Science at Louisiana State University, is an expert in fisheries management and ecology. "There's no potential now for contaminated seafood," he says. "All the seafood available now was harvested before the oil spill, so I certainly wouldn't be worried about it being contaminated."

But he's concerned, too about the public shunning of Gulf seafood. "When the fishing grounds are reopened -- and they will be -- I'd be confident in the safety of the food. It's pretty easy to test [for oil-related toxins] in the product. Consumer safety is as big a part of NOAA as fisheries management, and they're very, very good at monitoring contamination. Every once a while, small oyster areas will be closed because a boat came in and pumped out their ballast water. They can find that, so they have a strong system. I think consumers can be confident."

But what Dr. Cowan is not confident of, though, is whether there will be many fishermen left to work the waters when they re-open. Many, who work on bigger boats, do need to fish in deeper waters -- the kind that are currently closed -- and it may not be long before their unpaid mortgages put them out of business. And, of course, the spill could move and worsen.

"The shrimp industry in the Gulf has declined primarily because of the price of imported shrimp. Between that, Katrina, and the price of fuel going up again, I don't know whether the fishery is resilient to withstand a closure like this for very long. This could be very serious," he says. When asked what can be done to save this industry and this way of life, he reiterated an answer I've been hearing from years from fishermen themselves: "Encourage people to eat Gulf oysters and shrimp."