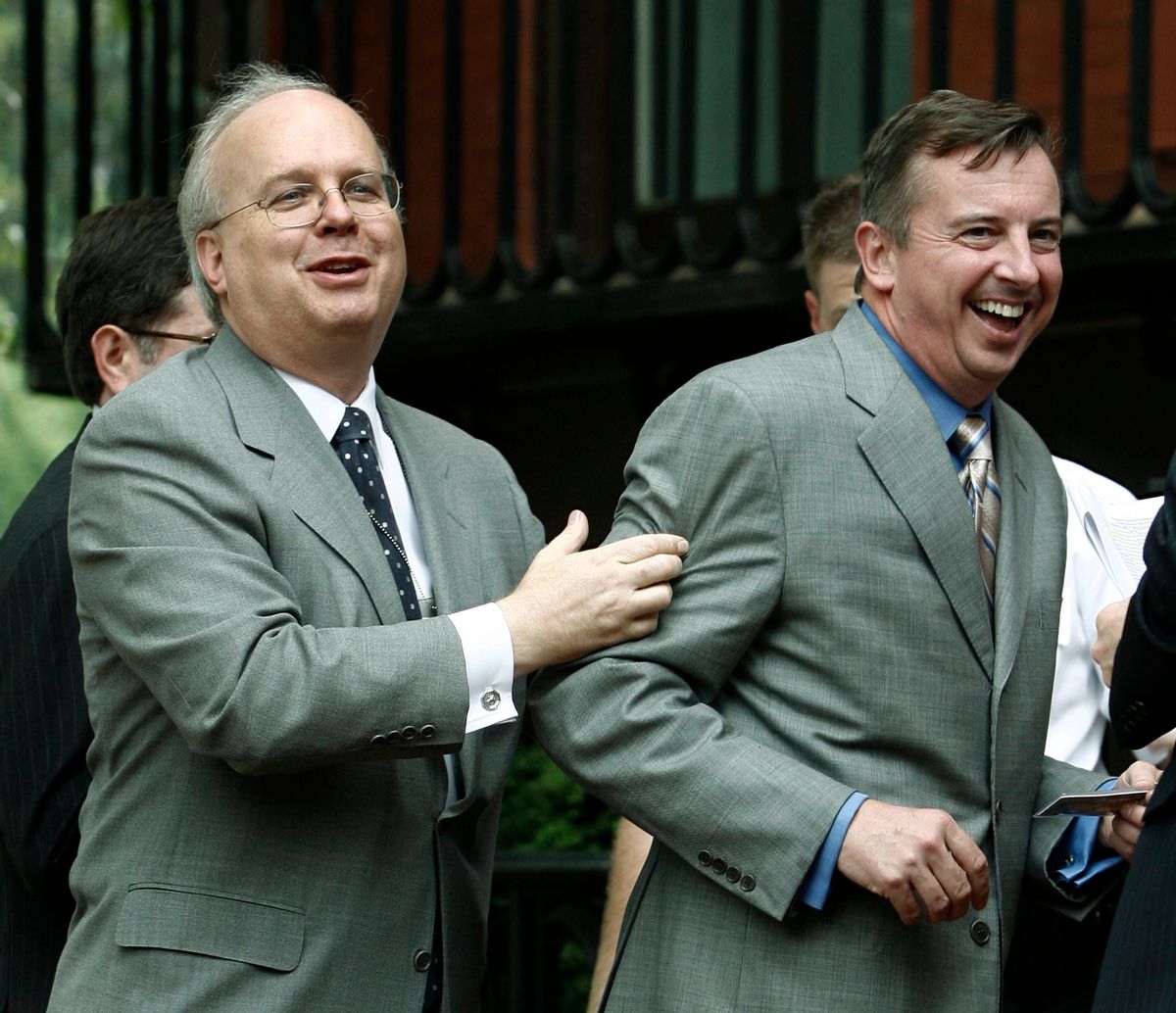 U.S. President George W. Bush's political strategist Karl Rove (L) jokes around with White House staffer Ed Gillespie as they walk to a farewell party for former Director of the Office of Management and Budget, Rob Portman, across from the White House on Pennsylvania Avenue in Washington, August 1, 2007. REUTERS/Jason Reed (UNITED STATES) (Reuters)
--

Exciting news: There's a bunch of brand-new Republican organizations on the bleeding edge of fundraising and messaging and campaigning. Politico reports on the "vast network" of groups dedicated to taking back Congress and the White House ASAP. It's a revolution, just like MoveOn and the Center for American Progress were for the progressive movement.

Except it's really more of a full-employment program for out-of-power Bush operatives and former Republican congressmen. And an end run around campaign-finance disclosure laws.

As Mike Madden explained while talking about the Republican State Leadership Committee, one of these new groups, last month:

The reason redistricting is proving to be such an irresistible cash cow is that the committees talking about it now -- on both sides of the aisle -- are organized as so-called 527s, regulated by the IRS instead of federal election authorities. They can raise as much money as they want, and depending on state laws, turn it over in big chunks to gubernatorial or state legislative campaigns.

The groups -- all unofficially led by Karl Rove and lobbyist/campaign strategist Ed Gillespie -- are putting food on the families of a rogues' gallery of ex-congressmen, ex-senators and minor and major appointees from both Bush administrations. The new face of the Republican Party, ladies and gentlemen:

American Crossroads seems to just be a shadow RNC, for people who don't want to donate to the real RNC, because that organization is currently run by an actual clown.

American Action Network is "modeled on the Center for American Progress," which itself was modeled on the Heritage Foundation. They're doing polling and running TV ads.

AAN Board members include:

This is the policy arm of the American Action Network. Norm Coleman's also the chairman, along with:

Resurgent Republic
This is a polling/messaging firm run by Gillespie and longtime P.R. guru and pollster Whit Ayres.

And Gillespie is in charge of the aforementioned Republican State Leadership Committee, which is raising money to win state legislatures in order to control redistricting nationwide.

Unelectable former elected officials who refuse to leave Washington, together with the never-elected lifelong party hacks who've never left Washington, always plant themselves in "consulting firms" and lobbying shops and think tanks when the other guys are in the White House, collecting checks until the day their party is back in power. The only new wrinkle here is that terribly constructed campaign finance laws are allowing them to raise more or less unlimited funds to get themselves back to the important work of running and ruining the country.