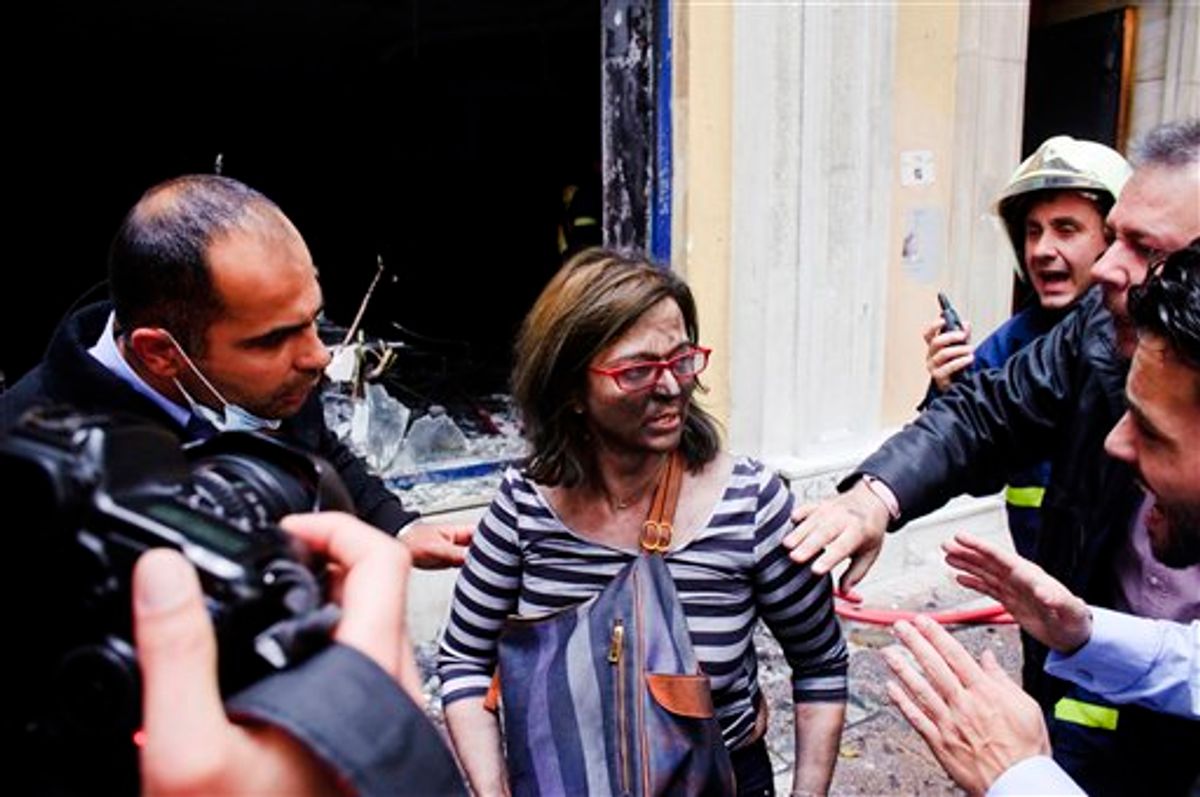 A bank employee reacts after being rescued from a fire that broke out when the bank was attacked during anti-government protests in central Athens, Wednesday, May 5, 2010. Three people died in the fire at the branch of Marfin Egnatia Bank, while the two women and two others were rescued. An estimated 100,000 people took to the streets Wednesday during a nationwide wave of strikes against spending cuts aimed at saving the country from bankruptcy (AP Photo/Iakovos Hatzistavrou) ** GREECE OUT ** (AP)
--

The protest followed violent street protests on Wednesday that left three people dead after a bank was firebombed.

In parliament, lawmakers voted 172-121 to approve the cuts that will slash pensions and civil servants' pay and further hike consumer taxes.

Prime Minister George Papandreou expelled three Socialist deputies who dissented in the vote, reducing the party's number of seats to 157 in the 300-member parliament.

"We have done what was necessary, not what was easy," Finance Minister George Papaconstantinou said after the vote. "Without these measures, we'd be thrown into the deepest recession this country has ever known."

The minister said Greece would default on debt payments this month unless it received the bailout loans from the International Monetary Fund and 15 euro-zone countries who had remained divided for months on how to aid Athens.

"Today things are simple. Either we vote and implement the deal, or we condemn Greece to bankruptcy," Papandreou told parliament before the vote.

"Some people want that, and are speculating (on it), and hope that it will happen," he said, referring to speculative attacks that have been blamed for raising Greece's borrowing costs to unsustainable levels. "We, I, will not allow that. We will not allow speculation against our country, and bankruptcy to happen."

The rescue loans are aimed at containing the debt crisis and keeping Greece's troubles from spreading to other countries with vulnerable state finances such as Portugal and Spain. The money will come from the International Monetary Fund and the 15 other governments whose countries use the euro.

Fears of Greek default have undermined the euro, and while the current package should keep Greece from immediate bankruptcy, its long-term prospects are unclear. The country's growth prospects are weak, and the population's willingness to accept cutbacks may wane, leading some economists to predict an eventual debt restructuring somewhere down the road.

Opposition parties lambasted the government for imposing measures that are too harsh for the population to bear.

"The dose of the medicine you are administering is in danger of killing the patient," conservative opposition leader Antonis Samaras said.

"You know that these measures have sparked a social explosion ... The citizens of this country have to believe there is a way out. Because whoever cuts pensions of euro700 cannot convince anyone."