Is BP's remedy for the spill only making it worse?

The chemical dispersants BP is dumping in the Gulf of Mexico are a cosmetic solution only. And they're toxic 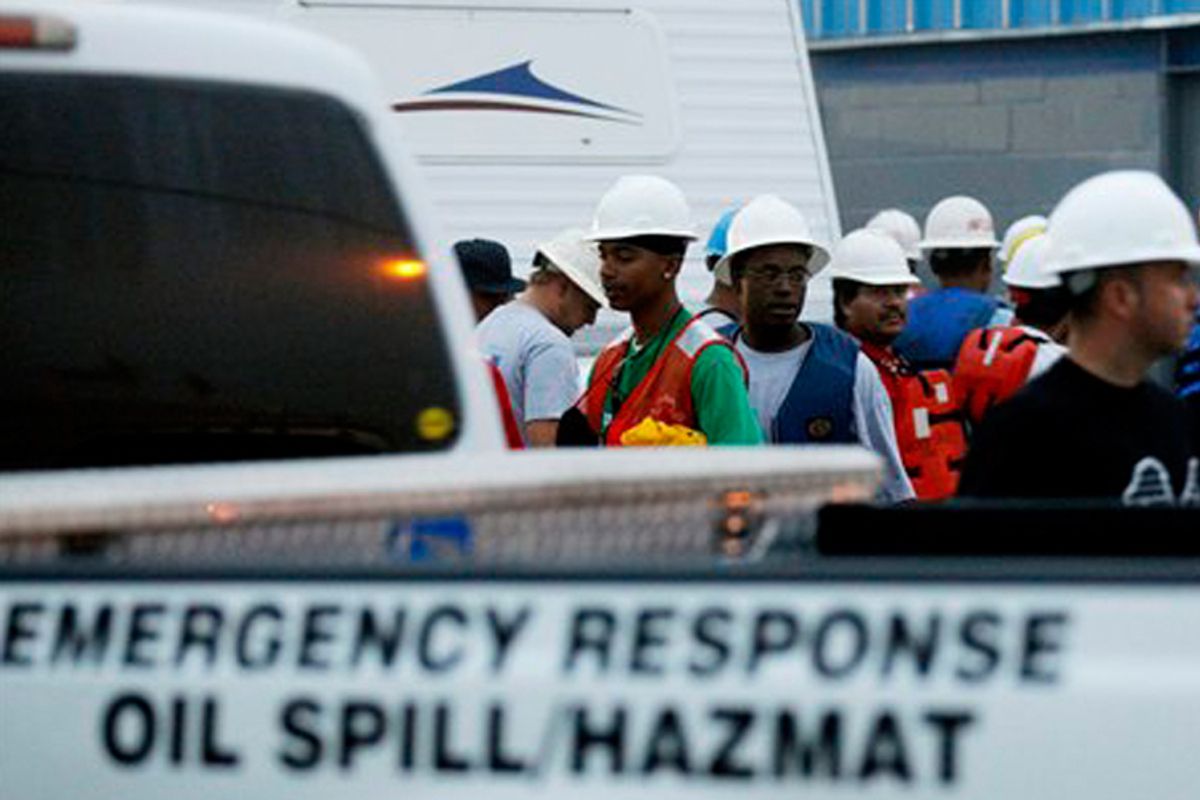 Last Thursday, BP began putting more than 100,000 gallons of chemicals into the Gulf of Mexico to disperse some of the hundreds of thousands -- if not millions -- of gallons of petroleum its undersea volcano of oil has gushed so far.

Chemically dispersing oil spills "solves the political problem of visible oil but not the environmental problem," Robert Brulle, a 20-year Coast Guard veteran and an affiliate professor of public health at Drexel University, told me. These dispersants "do not actually reduce the total amount of oil entering the environment," as a 2005 National Academy of Sciences report on the subject put it.

In short: out of sight, out of mind. But not out of the body of marine life.

I spoke to Carys Mitchelmore, a professor at the University of Maryland's Chesapeake Biological Laboratory and one of the writers of the toxicity chapter for the NAS report. She explained that dispersants are "a molecule that looks like a snake. The head part likes water and the tail part likes oil." The dispersant "pulls the oil into the water in the form of tiny droplets."

And that means subsurface creatures -- from oysters to coral to larval eggs -- that might never have had significant exposure to the oil are now going to get a double whammy, getting hit by the oil and by the dispersants. Worse, the oil droplets are now in a form that looks like food (e.g., the same size as algae) to filter feeders like oysters, which otherwise may only have been exposed to the far lower levels of dissolved oil components found under a typical oil slick. The droplets can also clog up fish gills.

Mitchelmore noted that "oil contains a whole suite of toxic chemicals, including known carcinogens." The dispersants can lead to far greater accumulation in living organisms of polycyclic aromatic hydrocarbons (PAHs) -- oil-derived toxic compounds that were found in mussels 19 months after one spill in which dispersants were used. After the 1989 Exxon Valdez spill, a study found PAHs had an impact on the developing hearts of both Pacific herring and pink salmon embryos.

The NAS report noted that many traditional lab studies of PAH toxicity use fluorescent lights. But research conducted under conditions equivalent to natural sunlight "indicated toxicity due to PAH increases significantly (from 12 to 50,000 times)." Also, many toxicity studies only look at exposure to PAH over a short period of time, rather than, say, many months. The point is that in the real-world of a massive, chemically dispersed oil spill, toxicity may be thousands of times higher than lab studies suggest.

ProPublica has reported that BP has bought up more than a third of the global supply of dispersants. Nalco Holding Co. has provided its entire inventory of one dispersant, Corexit 9500, to BP and the Coast Guard. Nalco's chief technology office, Mani Ramesh, has claimed that "Corexit's active ingredient is an emulsifier also found in ice cream," and that it is not harmful to marine life.

Mitchelmore, however, has extensively studied the impact of Corexit 9500, and found the chemical to be "pretty toxic to soft corals." It was "acutely toxic" to corals at low levels, 30 parts per million.

While there hasn't been much new research since the NAS report, she pointed to a recent Israeli study that looked at six different types of dispersants and found them very toxic to corals. The study recommended that they not be used anywhere near them.

Nonetheless, the dispersant-laced oil spill will soon be entrained in the Loop Current, which is part of the Gulf Stream, sweeping it toward the Florida Keys, home to America's biggest coral reef.

Mitchelmore is particularly concerned about corals because they are "under siege from multiple sources, including human sewage, metal pollution, and of course they are dealing with issues from global climate change including warming and ocean acidification."

"We could be getting to the point that puts coral over the edge," in terms of its long-term survival, she warned.

Still, this doesn't mean she's against using dispersants. With this disaster, she explained, we have a very tough trade-off. On the one hand, there's a crucial need to protect the shoreline and sensitive coastal habitats, which will face long-term devastation if oil overwhelms them. A key purpose of the dispersants is to stop the oil from reaching the shore.

On the other hand, dispersants are normally applied on a surface oil slick, but BP is applying them near the sea floor. "This is something new, "Mitchelmore said. "I don't think this has been done before." Nobody has any idea what will be the impact of massive exposure to these toxic chemicals on organisms that live on the bottom or feed off the bottom of the ocean.

The effects of this horrendous spill will be with us for many years. Thanks to the dispersants, we may not directly see many of the worst effects, but sensitive marine ecosystems will feel them. Somehow, BP should have to make restitution for that unseen destruction, too.

But, as Professor Brulle has noted, "With a spill of this magnitude and complexity, there is no such thing as an effective response."

What we need to focus on is prevention. That means an end to the voluntary, "trust us," self-regulation of offshore drilling that BP and Big Oil have insisted upon. And it means that we should reevaluate offshore drilling so close to the coast, which provides very limited benefits (a reduction in the cost of gasoline that comes to pennies a gallon). And it also means we must begin as fast as possible ending our addiction to oil. We need comprehensive energy and climate legislation to shift from the dirty, unsafe fuels of the 19th century to the clean, safe fuels of the 21st century that never run out.

Joseph Romm runs the blog ClimateProgress.org for the Center for American Progress Action Fund. He is author of the new book "Straight Up, America’s Fiercest Climate Blogger Takes On the Status Quo Media, Politicians, and Clean Energy Solutions."