Explaining the crash: "Erroneous trades," hyperactive computers, and the madness and delusion of crowds 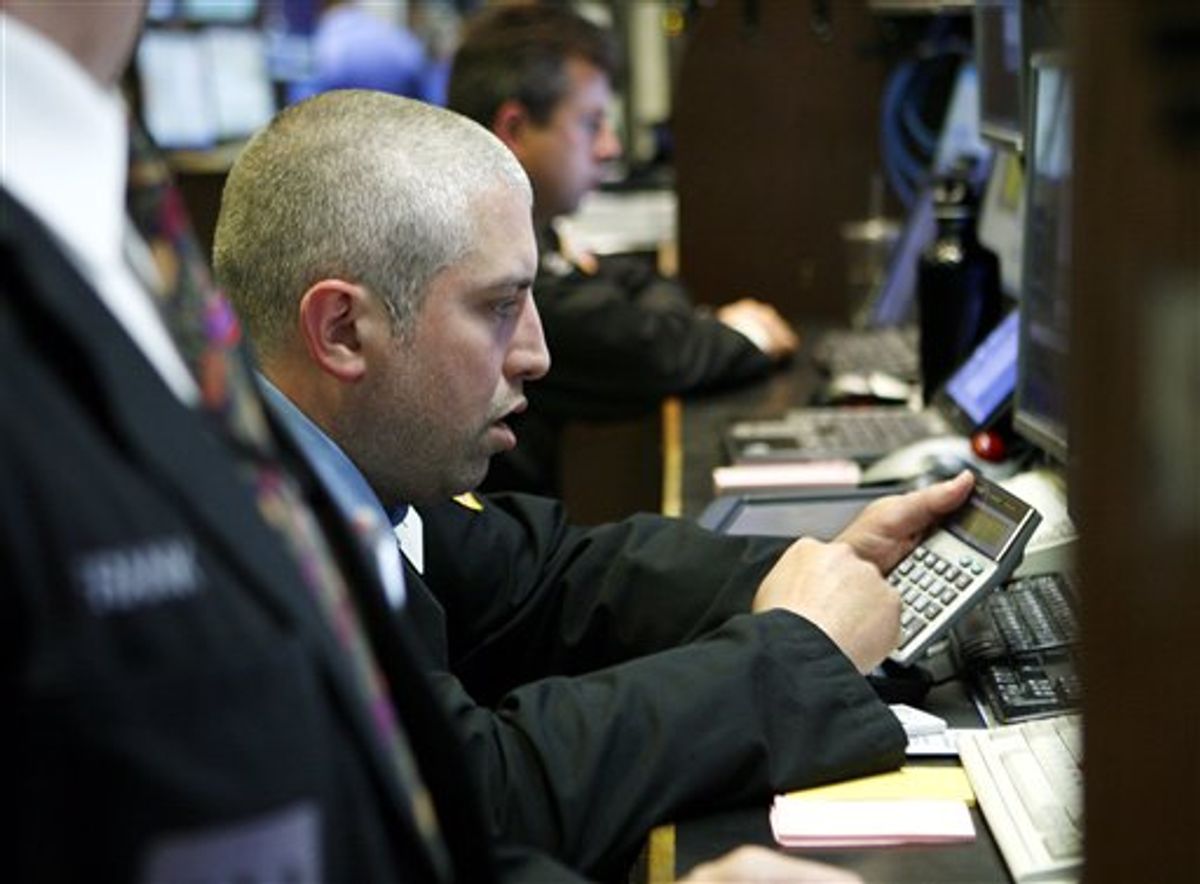 A broker works the numbers at his post on the trading floor of the New York Stock Exchange Tuesday, May 4, 2010, in New York. Stocks plunged around the world Tuesday as fears spread that Europe's attempt to contain Greece's debt crisis would fail. (AP Photo/David Karp) (AP)
--

During one 15-minute stretch Thursday afternoon the Dow Jones Industrial Average fell by around 550 points. The stock market had already been trending down for hours, but around a quarter to three share prices plunged in a nose dive that put to shame anything we saw during the craziest days of the credit crunch.

Then, just as quickly, stock market indices swung back, and what looked like Armageddon merely became one of the worst days for U.S. stocks in the last year and a half. Right behind the severe case of whiplash followed a flurry of rumors about incorrectly executed trades and computerized mayhem. Because, you know, there has to be an explanation when things go this awry.

The forensic analysts will be hard at work for days to come, but here's what's being talked to about right now. NASDAQ is investigating multiple reports of "erroneous trades" that may have taken place between 2:40 and 3:00 p.m. CNBC and Reuters reported that Citigroup is looking into whether one of its traders may have mistakenly input the word billion instead of million in a trade involving Proctor & Gamble, (whose shares had fallen by a whopping 37 percent by 2:47 p.m.,) or in an transaction on futures contracts tied to the Standard & Poor's 500 stock index. Some 16 billion of those futures were sold in a span of two minutes, according to the CNBC report. That seems like a lot. (Businessweek reported at 5:49 p.m. that Citigroup had found "no evidence" of erroneous trades.)

The Wall Street Journal's Mean Streets columnist, Evan Newmark, theorized that after the bad trades goosed the market, the computers took over.

We'll have to wait for a full autopsy of today's trading day. But it's a safe bet that after the trader's initial error, high-frequency trading computers remorselessly running their algorithms took over. I'd be amazed if "high-frequency trades" don't account for the vast majority of the executions that took place between 2:15 and 3 pm at the NYSE.

NASDAQ is busily nullifying trades that it deems out of bounds, aiming to restore some order to the market. Personally, I'm a bit reassured at all this evidence that computer irrationality can so overwhelmingly outgun mere human panic. But I would also caution at dismissing today's wild market freakout as an aberration borne of human error and technological malfunction. On the contrary, today's kooky Wall Street action is less aberration than it is accurate reflection. Psychology (nervous investors keeping a leery weather eye on Europe's sovereign debt woes) mixed with complex systems (highly interconnected global financial markets) and high technology (trading platforms featured sophisticated software and taking advantage of powerful computers and fast telecommunication networks) adds up to a potent, volatile brew. That's the nature of the beast, not an exception to the rule.

Call it the inefficient markets theory. If we learn one thing from today's debacle, it is that we seem to have constructed a global financial system that is fundamentally prone to volatile excess. In this hothouse, little mistakes can grow into big problems in less time than it takes to pour a cup of coffee.

Here's hoping that there is a good labor report from the U.S. government on Friday morning, because right now, I don't think the markets have the fortitude to handle any more bad news.