Fears of a European meltdown cause a Wall Street freak-out, as the Dow plunges 1,000 points before rebounding 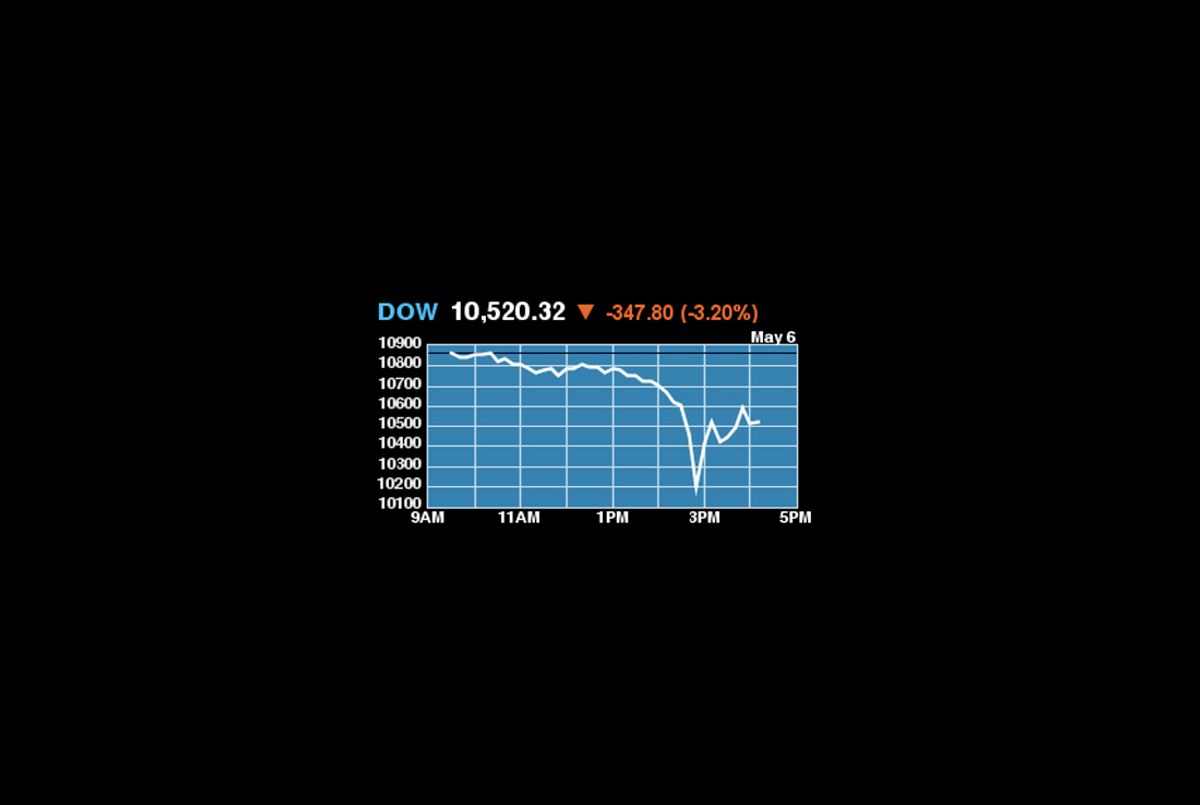 A stock market crash has a funny way of focusing attention. Thursday's wild gyrations in the Dow -- dropping nearly 1,000 points in a nausea-inducing free fall at one juncture, then shooting immediately back up before closing "only" 350 points down -- undoubtedly spawned an outbreak of anxiety attacks and flashbacks to the crazy days of fall 2008 in Wall Street and Washington. The frenzy was so great that Bloomberg News and Yahoo Finance couldn't handle the Web traffic (although Google Finance sailed right along). But that's to be expected when the Dow registers its worst intraday loss since 1987.

Despite a few TV pundits arguing that fears about the course of bank regulation were contributing to the stampede, or that a computer glitch or incorrectly inputted trade triggered the panic, the clear underlying driver for the crash was the concern about a spreading sovereign debt crisis in Europe.

Forget about too-big-to-fail insolvent banks. Today's nightmare is a vision of insolvent countries knocking each other down like a line of dominos, with street riots and brutal recessions breaking out all over. The credit crunch of 2007-2008? Today's panic suggested that past troubles might be merely a prelude to a much more devastating crisis.

Market participants seem to believe that European leaders are not taking forceful enough steps to stop the bleeding. They're looking back longingly at the steps taken by Bernanke's Fed to take every toxic asset it could buy off the hands of the banks, and wondering why the European Central Bank can't apply the same strategy to government bonds.

This storyline will be with us for awhile. Even if  a Citibank trader did turn another bad day in the market into an apocalyptic meltdown by sending a sell order denominated in billions instead of millions (a hanging offense, if I ever heard one), or a computer error trashed Procter & Gamble's stock price,  the U.S. stock market is hardly the only indicator light flashing red. The euro dropped to a 14-month low, yields on "safe" U.S. Treasuries plunged, while spiking up on Greek, Spanish and Italian bonds, and credit market spreads signaled more stress in financial markets than we've seen in months.

Whatever the case, we've clearly entered a new stage in the crisis. Hang on tight.