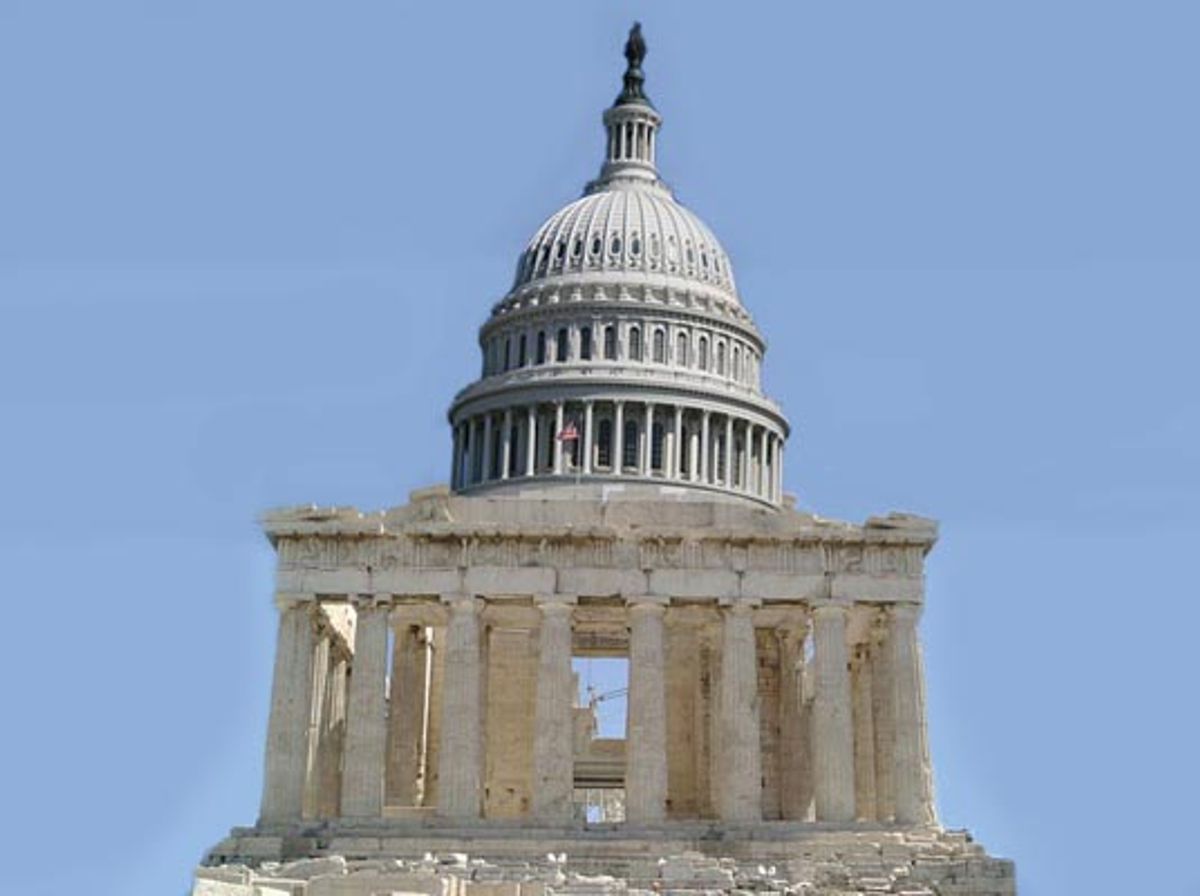 UPDATE: Within an hour of publishing his post, U.S. stocks went into freefall. With an hour to go before the end of trading, the Dow Jones Industrial Average was down nearly 700 points, after plunging nearly a thousand.)

The word of the week in financial circles is "contagion." As in: Stay away from Greece or catch a terrible case of sovereign debt crisis. Global markets are currently treating every development in the ongoing Greek financial crisis saga with the same care, and fear, that epidemiologists track outbreaks of the Ebola virus. Portugal and Spain are already running fevers, Ireland and Italy are looking a bit pale, and the UK, although distracted by an election, is checking its own temperature constantly.

The New York Times has a great graphic detailing the interlocking network of eurozone debt entanglements. Everybody owes everybody else a lot of money. Banks are beginning to clamp down on inter-bank lending, suggesting a rerun of the credit crunch that ravaged Wall Street two years ago.

But what about the U.S? Although recent economic indicators, taken together, generally tell a story of slow economic recovery, investors in U.S. stocks seem just as hair-trigger nervous as their counterparts across the Atlantic. After sharp downward ticks on Tuesday and Wednesday, by early afternoon Thursday, the Dow Jones Industrial Average was down another 230 points. Every statement by a European leader is parsed instantly for whether it shows enough resolve to forthrightly address the crisis. If found wanting, stocks plummet, as they did this morning when European Central Bank President Jean-Claude Trichet disappointed markets by suggesting that the ECB had not yet discussed directly buying government bonds to ease the spreading debt crisis.

U.S. market jitters imply that the Greek "contagion" may eventually spread to the U.S. But how, and in what form? The U.S., proud printer of the planet's reserve currency of choice, is not part of the eurozone. The dreaded bond vigilantes circling around the weaker eurozone members like wolves culling the runts and elderly from a herd of caribou are nowhere to be seen. On the contrary, a global flight to the safe haven of U.S. Treasuries has actually pushed down yields and lowered governmental borrowing costs.

But if there's anything we've learned from the last two years, it's that globalization has wrought a world where a collapse in Orange Country real estate can take down a bank in Germany, and likewise. There are a number of vectors upon which Europe's flu can jump the Atlantic.

The first, and most obvious likelihood is that attempts to resolve the spreading debt crisis by cutting government spending and instituting austerity regimes will plunge the eurozone back into a deep recession, and suck demand out of the global economy. If Greece follows through on the conditions contingent on the European Union/IMF rescue plan, the Greek economy will shrink drastically over the next couple of years. If repeated across Europe, that entails a significant damper on U.S. exports.

U.S. banks also hold more than $1 trillion European debt, according to the Wall Street Journal. Suppose a credit crunch in Europe coincides with a renewed downturn in U.S. housing prices, which in turn fuels even more foreclosures and bank writedowns. Double-dip recession, coming up!

But the largest part of the fear seems to be more psychological than physical. Greece mismanaged its finances, ran up huge deficits, and now can't borrow money to pay the bills. Attempts to reconcile accounts will require sacrifices that the general public is unwilling to make -- as witnessed by the nationwide strike and ongoing street protests that have already led to three deaths.

A government unable to pay its bills, its citizenry marching in the streets, its neighbors fearful that they might be the next domino to fall -- that's a scenario to strike fear in anyone's heart.

The U.S. is not Greece, as Marshall Auerbach explains reassuringly at Credit Writedowns this morning. The U.S. has ample ability to pay its debts, and so far, seems reasonably safe from crippling inflation. If the government can successfully stimulate the economy into running full throttle, that will automatically increase tax revenue, reduce social welfare spending and ease deficit pressures.

But huge obstacles remain. The prospects that Republicans and Democrats can come together and figure out a mix of tax hikes, spending cuts and entitlement tweaks that solves our long-term budget problems seems infinitesimal. At some point, that contradiction must be resolved, or the Greek tragedy currently playing out will turn out to be a dress rehearsal for a much bigger, epic drama.