How to guarantee a Gulf oil spill

Take one regulatory agency, instruct it to take its cues from the private sector, and add oodles of cash 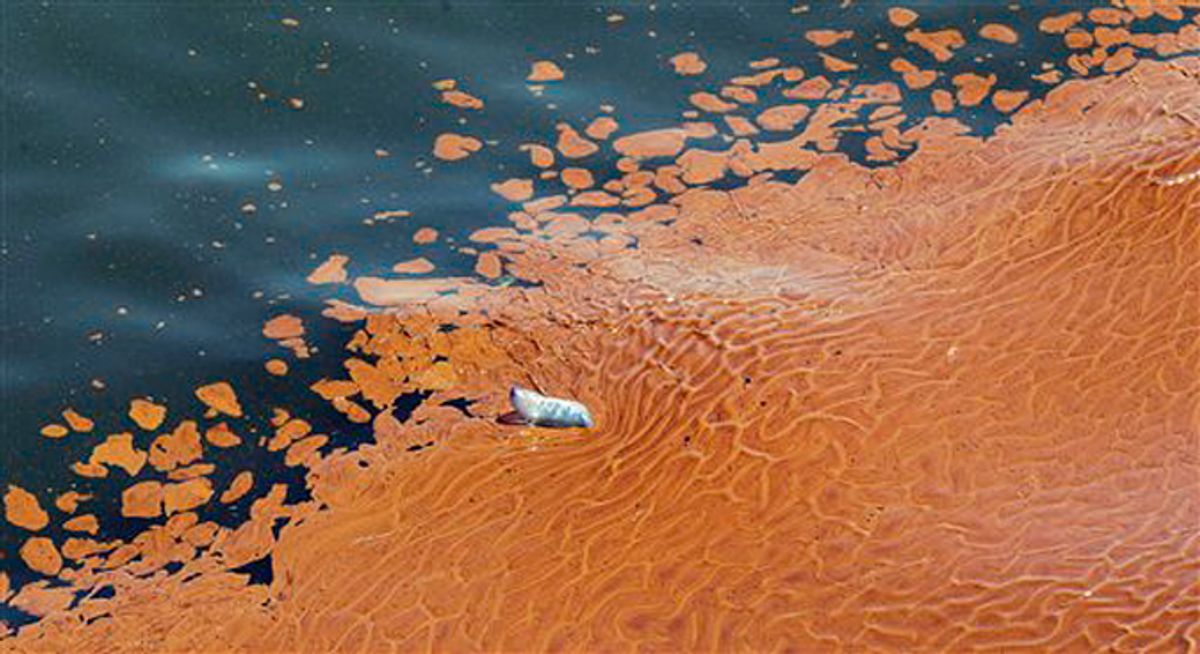 The Gulf oil spill mess keeps spreading, and not just near the shores of Louisiana. The pressure is ratcheting up on the Minerals Management Service, the Department of Interior agency that watches over offshore drilling. One expects The New York Times and Financial Times to be on the job. But when even the Wall Street Journal feels compelled to blame a government agency for getting too cosy with industry -- "Oil Regulator Ceded Oversight to Drillers" -- you know it's been a tough week in the office.

It seems worth pointing out here that not only has my own baleful eye been fixated on MMS for years, but in what I am pretty sure was one of the more lurid accounts of the GAO inspector general's notorious expose of MMS bad behavior in Sept. 2008 I channeled and unwanted glimpse of the future. For your enjoyment, I give you the first three paragraphs of "Snorting Speed Off Of Toaster Ovens." (Italics all mine. )

Try, if you can, to ignore all the lurid coke-and-sex bombshells contained in the three Department of Interior Inspector General reports about the shenanigans at the U.S. Minerals Management Service (MMS). The program director who snorted speed off a subordinate's toaster oven, and made her give him a blow job while driving around the neighborhood. The two "MMS Chicks" who were notorious for getting plastered at conventions and having one-night stands with oil industry employees.

Try -- and yes, I know it's hard -- try even to ignore the allegation that one program director told a subordinate that if she could score him some coke during the MMS performance appraisal period, he would increase her performance award. What's the big deal? Who wouldn't be motivated by such an incentive? And what's a little drunken sex and coke binging on government time among friends? It happens to the best of us.

The significance of the three reports delivered by the inspector general to Congress on Wednesday lies not in the prurience of some of the indiscretions, but in the symbolism. The Royalty-in-Kind Program of the U.S. Minerals Management Service is where offshore drilling meets the U.S. government. And gosh, is it ever one heck of a mess. You want a toxic oil spill in the Gulf of Mexico? Just read the reports.

It is exceedingly difficult for partisans of any description to resist the tendency to connect the dots between whatever action MMS took or didn't take and blame it on whoever was occupying the White House at that precise time. Right-wing bloggers are jumping all over the fact that on April 6, 2009,  MMS granted BP "a 'categorical exclusion' from having to perform what would otherwise have been a mandatory environmental analysis of its Deepwater Horizon project," as the FT reports. That was on Obama's watch! It must be his fault!

But wait just a minute. The Associated Press reported on Thursday that in April 2008, MMS changed its rules requiring all Gulf rig operators to file plans declaring how they would handle an "uncontrolled blowout." Bush's fault!

I think there is little question that history will judge George W. Bush's administration as having facilitated one of the most egregious examples of comprehensive regulatory capture ever accomplished in modern American history. But the problems with MMS go back even further than his oil-soaked regime. The Wall Street Journal reports that "for more than a decade" the agency has been gradually shifting responsibility for writing and implement safety regulations to the oil industry.

According to the Journal, the MMS cited a 1996 law, the National Technology Transfer and Advancement Act, "that encouraged federal agencies to 'benefit from the expertise of the private sector' by adopting industry standards." That law was signed by Bill Clinton! Shame on him.

Or you can go right to the inception of the agency in 1982, under the Reagan administration. Any government branch directly entrusted with generating revenue from federal leases to oil and gas companies is bound to generate conflicts of interest -- especially during an era when the predominant governing ideology regardsgovernment as the "problem" and the private sector as infallible. That's Reagan's fault. He owns the Gulf oil spill!

An optimist might hope that the Gulf oil spill will serve as a kind of inflection point -- from here on out, no longer we will let industry decide what's safe. But judging by what a struggle it is just to get some mild regulatory reforms passed in the financial sector and a financial meltdown far more disastrous to our livelihoods than the BP spill, it's difficult to feel to confident about the prospects.