I loved this chain too much to see it resort to novelty fat-food. Et tu, IHOP? But I had to try it 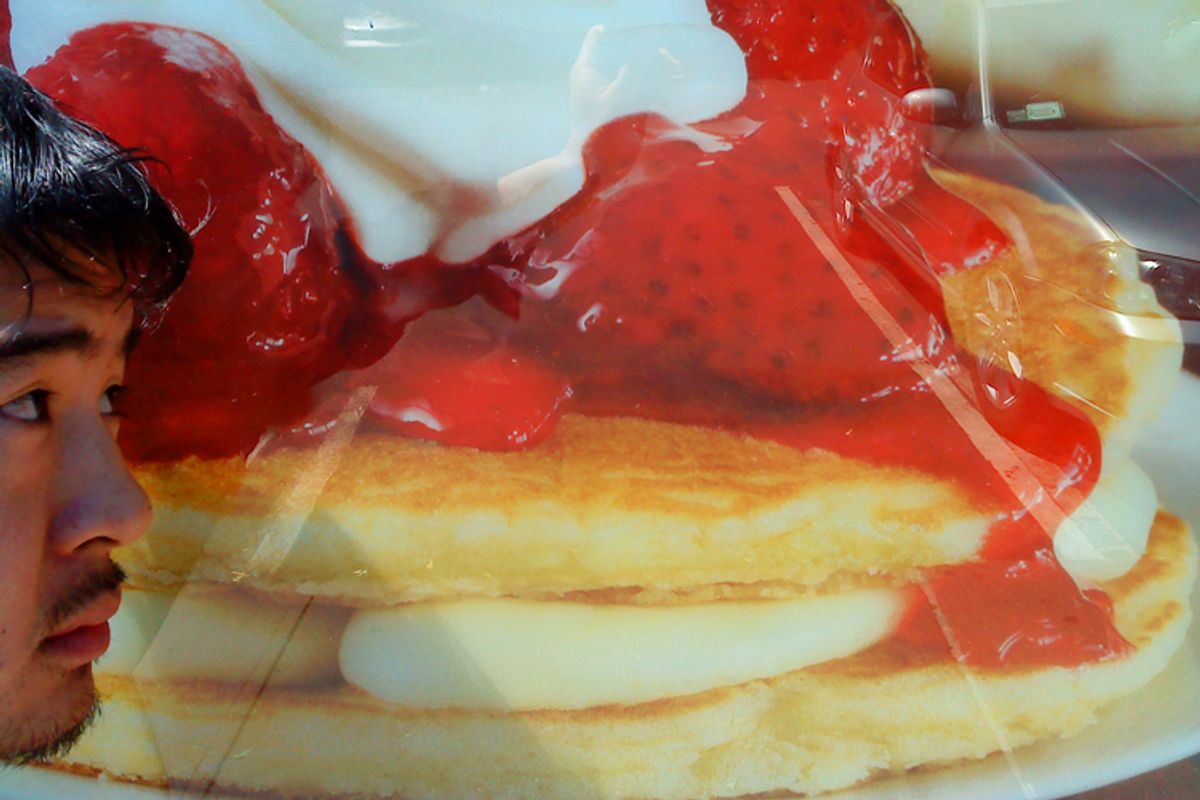 Snicker if you want, but IHOP matters to me. My parents used to take me there for breakfast on weekends -- when I was really young and we had moved an hour away from their friends to live at our aspirational suburban address. I remember meeting aunties and uncles of all kinds of real and imagined relation. We sat at a big table, under huge dark beams that made the restaurant look like a cathedral, and I ate faraway-sounding foods like German pancakes and Spanish omelets. I loved it. For a kid eating Chinese food at home every night, the International House of Pancakes felt like a window to all the exotic tastes of the world. Back then, I was too young to know or care that the Spanish omelet was just eggs with canned salsa.

I remembered all these things, that particular flavor of innocence, when I pulled yesterday into the parking lot of an IHOP, preparing to grapple with its new Pancake Stackers, floppy pancakes with cheesecake jammed in between them. While KFC went all-out dude-style hawking the Double Down, The Sandwich That Uses Fried Chicken For The Bread, IHOP's is a kinder, gentler this-is-why-we're-fat food, with a sweetly dorky ad:

I got out of my car. The first thing I saw was a soda sitting on a car roof a few spots away, a Double Gulp from a 7-11 -- 64 fluid ounces of pure corn syrup and bullshit. It was enormous, towering ominously in the distance. I rushed inside with a bad feeling.

But I opened the door and ... the smell! It was wonderful: sweet syrup and diner coffee, scents floating in the air so long they worked their way into the walls forever ago. A customer walked away from the register, saying, "OK, I'll give you a call later, honey," and the whole room sounded fantastic -- the soft, comforting murmurs of a family restaurant: chatter, children. It was 11:30 on a Wednesday, the place was full, and I felt utterly wholesome.

I started to look forward to my Pancake Stackers. It's just a little cheesecake with your breakfast, I thought. Who can hate on just a little cheesecake? I perused the menu, affectionately puzzling over the note about how they make their omelets with a "splash of our pancake batter for fluffiness," and the curious fact that despite the promotional buzz around the Stackers (we were on a one-name basis by now), they already had "New York Cheesecake Pancakes" on the menu. You see, for those, they put the cheesecake in the pancakes, not between the pancakes. (And my buns have no seeds.)

As I was contemplating the relative merits of cheesecake in-or-between, the server brought over my Stackers with the most winning smile. I took up my fork and instinctively pushed the tent of "whipped cream" off the strawberry sauce, toppling it over into a sad, busted pile at the end of my plate. I wasn't supposed to do that -- this is about getting the full experience. Clearly I was a little unprepared for this. Well, this is how it went:

Bite 2: OK, there's not so much cheesecake in here, but it was weirdly, obviously squeezed on, like with one of those caulk guns Taco Bell uses for its "sour cream." It tastes pretty good, though. Kinda tangy, kinda creamy. But man, that strawberry syrup is glowing lava red. And the crispy edge was pretty short-lived.

Bite 3: I never really want to eat as many pancakes as people will put on a plate, but this isn't so ba... muh ... exxxxcushe me, I jusht hit a geysher of cheeshcake. I can't really open my mouth. It's shtuck. Maybe forever.

Bite 4: Water, water, water. Clean it out. Focus. Concentrate. Oh look! I forgot about my side of sausage!

Bite 5: Here's a little history. The word "sausage" comes from the Latin "salsus," which means "salted." This bit of trivia was not lost on the good people who made this particular sausage, because it's burning my throat. The saltiness of it scares me, driving me back to the warm, smothering embrace of cheesecake-stuffed pancakes, even though they're more pasty than fluffy, and even though I'm starting to taste the metallic tang of baking powder in them.

Bite 6: Swallowing another smushy bite, I swear I can actually feel it dropping into my gut. I'm thinking back to that old IHOP, to that big table, to my family, and I know my emotional self is rebelling against the fact of my stomach. I ... want ... to ... like ... the ... Stacker.

Bite 7: I'm failing. I've given up on the pancakes, and just started to scrape the cheesecake off them, eating it with the strawberry-candy-flavored strawberries. I watch the "whipped cream" deflate into a shiny, bubbly puddle. It is very weird.

Bite 8: There wasn't going to be a Bite 8. I considered another go at the sausage, reconsidered, started to write in my notebook about reconsidering, and then suddenly bit off a chunk. I got a bit of hard gristle, another bit of cold grease, and finished, wishing that I'd stopped after the first time I'd thought better of it.

The server came back, asking sweetly, so dulcetly, how everything was. I smiled at her, told her everything was great, and sat back for a minute to listen to the murmuring in the restaurant. It was getting toward noon and people were coming in, waiting for a table for lunch. The sun streamed through the windows. I got my check and, in a last moment of curiosity, took another look at the menu. They don't serve the Spanish omelet anymore.