20 women from Naval Academy will make history, break barrier. For men, life on a submarine will never be the same 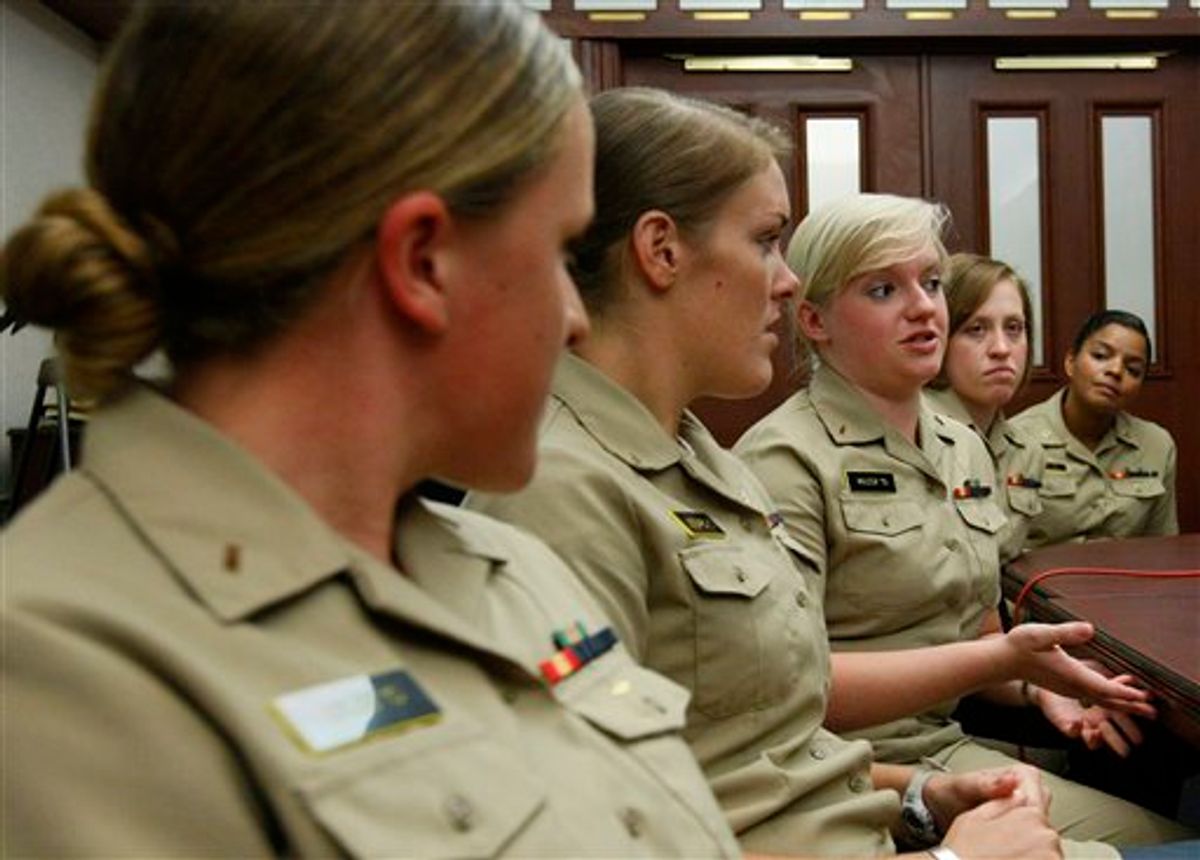 Midshipman Jessica Wilcox, center, responds to a reporter's question at the U.S. Naval Academy in Annapolis, Md., Thursday, May 6, 2010. Wilcox is one of 11 women selected to begin training to become submarine officers this summer in a program that takes at least 15 months. They will report for duty aboard a submarine by 2012. (AP Photo/Ann Heisenfelt) (AP)
--

The first female U.S. Naval Academy graduates who will be able to serve as officers aboard submarines said Thursday they feel ecstatic, thankful and blessed by the chance to break one of the military's last gender barriers.

So far, eleven female midshipmen have been accepted into the Navy's training program. Several talked about how their hopes and aspirations went from the buzz of possibility to thrilling reality regarding their life on a submarine.

"I didn't want to get excited yet," Midshipman Abigail Gesecki, of Nanticoke, Pa., recalled when she first heard that a policy change to allow women to serve on subs was under consideration. "And then it happened, and I was like: Wow! I'm in shock. It was a little bit of a feeling of shock that everything that I really wanted I got. It doesn't always happen that way in life."

A total of about 20 women will begin training this summer to become submarine officers in a program that takes at least 15 months. They will report for duty aboard a submarine by 2012. The first group of women will consist entirely of officers. They will be assigned to guided-missile attack submarines and ballistic-missile submarines, which have the most living space in the Navy's fleet.

Three women will be assigned to each submarine's rotating crews. That will allow all three women aboard a sub to share a single stateroom for sleeping. A single bathroom shared by the vessel's 15 officers will have a sign to show if a man or woman is inside.

The change is the latest generational leap at the academy. One student noted that her father graduated in 1971 -- five years before women were admitted to the academy.

"He thought he was shocked when I got in here," Midshipman Elizabeth Hudson, of Plymouth, Mass., said. "He's up for a new round of that now. He's very excited."

Midshipman Jessica Wilcox, of Honesdale, Pa., said she has wanted to be an officer on a submarine since her first year at the academy. Wilcox said she was drawn by the highly technical and skilled professionalism she saw in both the officer and enlisted ranks during a 24-hour submarine tour.

"For me, the best part of it was definitely the interaction between the officer and the enlisted crew," Wilcox said.

Midshipman Kayla Sax said she was attracted by the amount of responsibility junior officers have on submarines.

The change in Navy policy has brought some protests, especially from wives of sub sailors, because of the tight quarters and minimal privacy in the vessels, in addition to tours of up to 90 days at sea.

But Midshipman Misty Webster, of Wesley Chapel, Fla., said she doesn't believe the close quarters will be a concern, because male and female midshipman have been working together through four years of school, where each class is about 20 percent female. She also said the smaller quarters make for a more cohesive and professional atmosphere.

"We're used to interacting with them on a day-to-day basis," Webster said of the men.

Midshipman Kristin Lyles, of Fairfax Station, Va., said her classmates have been supportive.

"They were extremely happy when we found out on Monday that we were selected, because I feel like that's going to be the same experience we're going to have in the fleet to some extent -- because we've lived with these guys for four years and they're like our brothers in many ways," Lyles said.

Several of the women said that they're just excited to be heading for leadership roles in the military, and the chance to serve on a submarine is a plus.

"Mostly, I think we're excited about just serving in whatever role the Navy needs, and this happens to be a special time in the Navy and the stars kind of aligned for our class group," said Midshipman Laura Martindale, of Roselle, Ill.