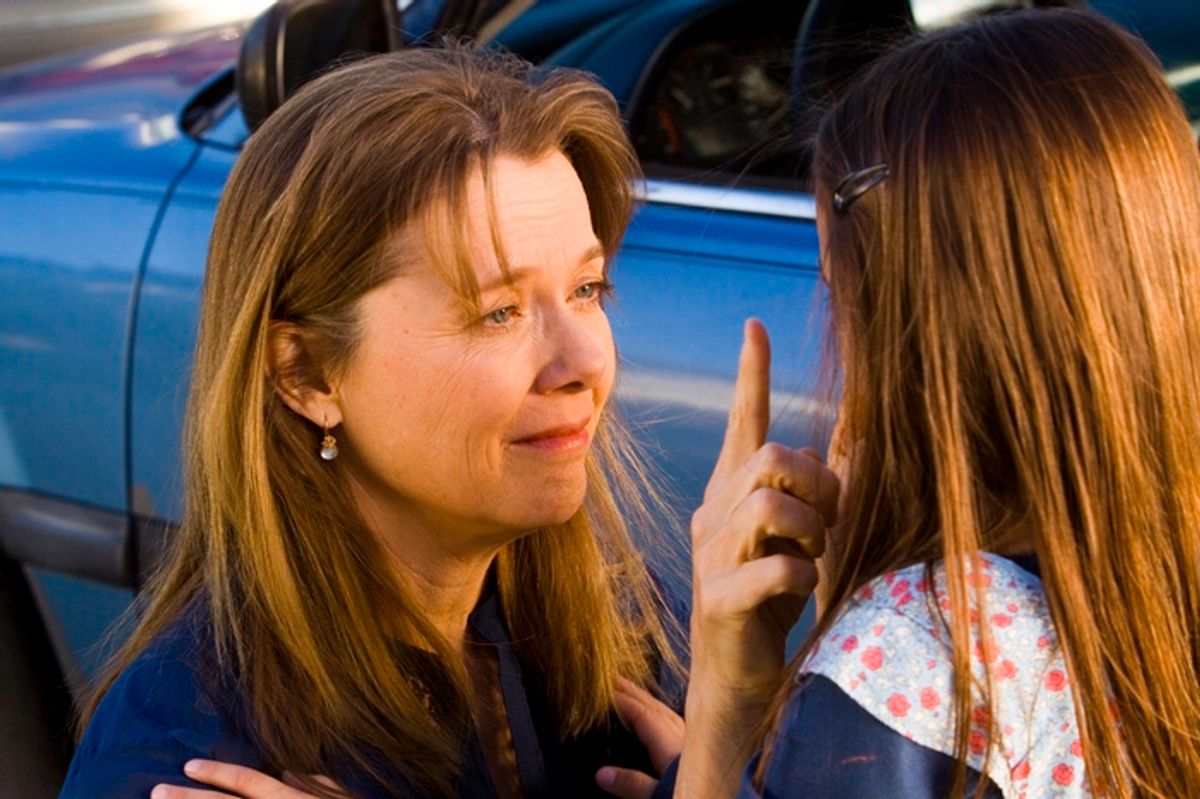 Writer/director Rodrigo García's fourth feature begins with an adolescent couple making out on a bed to the strains of dreamy '70s guitar. The girl solemnly lifts her shirt -- and, without a change in music, the scene segues to her cradling a now-swollen belly in a TV room occupied by other pregnant teens, and then again to an operating table where her scream is joined by the scream of an infant. At which point, a 50-ish woman (Annette Bening) opens her eyes, and resignedly climbs into her elderly mother's bed.

Lay it all out, brother.

García always has made the kind of ensemble films ("Nine Lives," "Things You Can Tell Just by Looking at Her") that have become nearly as insidious a cinematic cliché as the big-budget action movie. In some ways, "Mother and Child" is no exception. To wit: A snaggle of seemingly disconnected subplots rotate around an overarching theme (in this case, adoption). Coincidences occur that both reveal the great wisdom of the universe and handily move the plot along, and virtual strangers profoundly affect each other by trading clever paragraphs of dialogue in unlikely places (a rooftop).

But sometimes clichés really are clichés for a reason. Though the ensemble film may have toppled such otherwise serviceable directors as John Sayles, when it works, as with Robert Altman's every other project (to quote Pauline Kael), it offers rich insight into the human condition. Certainly in this saga of four generations of mothers and daughters, García has achieved a scale and empathy that far surpasses his previous machinations without sacrificing the nuanced platforms he has granted actors all along.

As Karen, a physical therapist who still lives with her mother, Annette Bening delivers her finest performance in decades. Doggedly unadorned, she sports the depressing little bangs of women everywhere who mourn their lost youth, and mines that always precise enunciation to convey a brittle self-possession that is echoed in her daughter, Elizabeth (Naomi Watts, at her best), a lawyer whom she has never met although they both dwell in Los Angeles. Is it that city's evocative geography or plain laziness that makes L.A. the home of so many ensemble films, from "Crash" to the recent disaster "Valentine's Day"?

A cool number bordering on a cold fish, Elizabeth eschews all permanent human bonds and goes to great lengths to dissolve other people's as well. She beds her widower boss (a remarkably restrained Samuel Jackson) in what she informs him is "a sexual relationship of a temporary nature." She also beds her neighbor (Marc Blucas) when his pregnant wife (Carla Gallo) cheerily interrogates her one too many times, and then makes sure to slip her soiled panties into their apartment when he's not looking. When she gets pregnant, she's not only disturbed because the father's identity is unclear but because she tied her tubes when she was 17.

It's a neat trick that Elizabeth and Karen's damning cadences and quick, tight smiles mirror each other so accurately, and another neat trick that we are left to wonder how much to make of it -- just as we never know what to extrapolate from the spiritual and emotional dilemmas of infertile Lucy (Kerry Washington, charming and formidable) as she struggles to adopt a child from college student Ray (Shareeka Epps). The son of author Gabriel García Márquez, García is no stranger to the myriad burdens and boons of legacies. But although he raises a bevy of worthy questions about whether blood or proximity seals family ties -- or, even more compellingly, whether family ties ever truly exist -- he doesn't purport to answer them. To his credit.

More overt is García's feeling about the dance between men and women. In his cosmos, women are invariably all-powerful beings, driven by their passions and protective instincts, and he seems to respect this power if slightly fetishize it. All sexual encounters are initiated by ladies, uh, manhandling their partners, and all male characters, from Karen's beau Paco (an un-hammy Jimmy Smits, if you can believe them apples) to Lucy's husband Joseph (David Ramsey), cower in the presence of females, whether out of respect or resentment. After a while, this gender imbalance begins to grate. Under all that deference lives a strange passive-aggression, a sense of men as innocent bystanders to the wilderness that is Woman, hear her roar! It's the cinematic equivalent of the guy who wears a ponytail, rides a bicycle to work, takes his wife's last name and then beats her up for using the wrong recycling bin.

But such bizarre kowtowing fails to overshadow "Mother and Child's" overall strengths. Though over two hours, it's that rare film that never lags because it covers so much ground in both time and topic without preaching. Even more rare, the characters' integrity is never sacrificed to the film's exploration of nature versus nurture. Channeling an old-soul compassion, García has not only redeemed himself but also a nearly exhausted genre.