Twenty years ago, Congress passed a law to deal with catastrophic oil spills. Did it work? 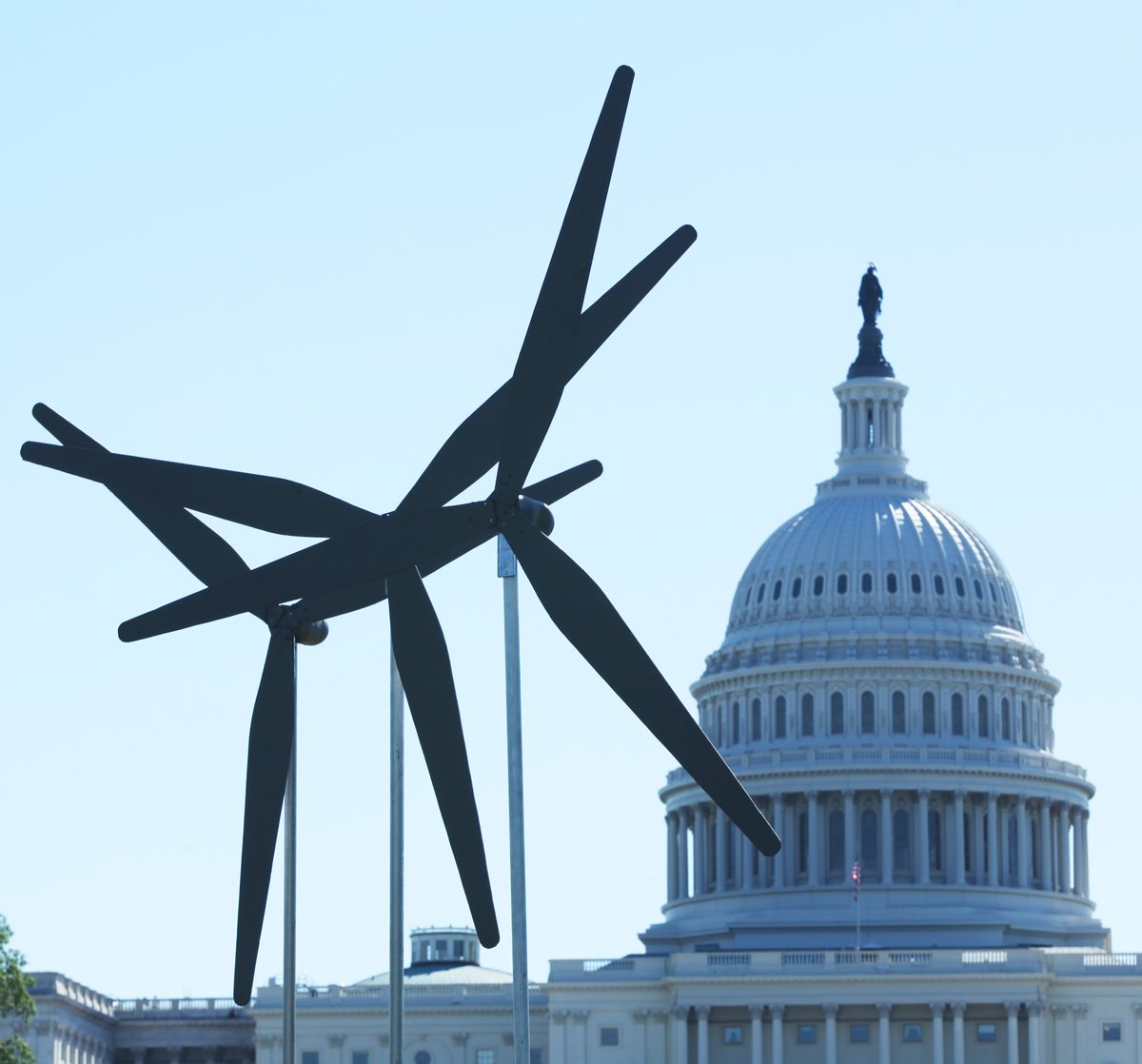 Windmills replicas to symbolize clean energy, erected by Greenpeace are seen near the Capitol in Washington, Wednesday, May 5, 2010, to protest the oil spill in the Gulf and call on President Barack Obama and the Congress to stop plans for any new offshore drilling. (AP Photo/Manuel Balce Ceneta) (Associated Press)
--

When the Exxon Valdez oil tanker hit a reef and dumped 11 million gallons of crude oil into Alaska’s Prince William Sound in March 1989, Congress jumped on the public attention and passed sweeping legislation requiring companies to take steps to prevent spills and to develop detailed containment and cleanup plans.

The Oil Pollution Act -- signed into law by President George H.W. Bush in August 1990 -- seemed like a resounding bipartisan success at a time when Democrats and Republicans essentially split control of Congress and the White House. But today, as the country grapples with what may be an even bigger spill in the Gulf of Mexico, there are questions about whether the 1990 law was really that effective.

Advocates for stronger federal oversight of the drilling industry say industry pressure back then led to a watered-down law. “We felt it all the way. We knew they were fighting us," said Sen. Frank Lautenberg, D-N.J., an original co-sponsor.

But Rep. Don Young, R-Alaska -- who helped craft the law in the House with the late-Rep. Gerry Studds, D-Mass., then chairman of the now-defunct House Merchant Marine and Fisheries Committee -- says it has stood the test of time.

"Because of the Exxon Valdez spill we came up with what I believe is one of the best pieces of legislation in Congress," Young said. "If we didn’t have OPA, we wouldn’t have any ability to address the spill that is occurring today in the Gulf."

"We didn’t realize then … we did a favor for every other area that imports oil or exports oil,” he said. "Because we had no equipment to take and combat an oil spill at all. And now I think we’re in good shape."

Young does acknowledge, though, "Can there be better improvement further offshore? That’s a question."

Critics have accused British Petroleum, which runs the Deepwater Horizon rig that exploded 50 miles off the coast of Louisiana April 20, of being slow to respond to the spill and of employing questionable cleanup methods.

"There is going to be a blistering, scalding indictment of the practices the industry engaged in to avoid the kinds of implementation of safeguards that could have removed the likelihood or possibility of this kind of accident occurring," said Rep. Edward Markey, D-Mass., chairman of the House Energy and Commerce subcommittee on Energy and Environment.

Offshore drilling critics have seized on the spill to argue that it proves the industry isn't equipped to handle spills in deep waters.

"I was a little irritated the other day, one of your people wrote an article about [how] we’re still cleaning up with paper towels," Young said. "That’s bullshit. That’s not true. And to have to use this issue as a finger-pointing thing is dead wrong."

Obama administration officials, who themselves have been accused by some Republicans of being slow to fully address the Gulf spill, have argued that Coast Guard and other federal officers were on the scene almost immediately, something that Young said is due to the 1990 law.

Young recalled his conversation with a top Coast Guard official, who gave him the news of the Valdez spill back in '89. "He said, 'We got a bad one. Really bad,'" Young said. "And I said, 'Set it on fire.'" While Exxon was on board with the idea, Young said the lack of federal oversight prevented the action. "There was nobody that would call the shots," he said. Under the '90 law, the Coast Guard is now given the lead in responding to spills and helps coordinate actions among other agencies.

The biggest sticking point when the '90 law was drafted was a cap on liability damages an oil company would need to pay for a spill.

In the years before the Valdez incident, there had been efforts in Congress to curb oil spills. In fact, legislation that eventually led to the Superfund hazardous waste cleanup law in 1980 initially included language addressing oil spills, but that language was stripped in the Senate.

Efforts to limit the liability incurred by oil and shipping companies, though, "were the thing that prevented action on legislation for a long time," said Bob Davison, who worked on the '90 law as a Democratic staffer on the Senate Environment and Public Works Committee. That changed when the Valdez accident captured public attention, but even as the law was drawn up, "all caps on liabilities were issues," Davison said. And oil and shipping companies, he said, "are the ones I have scars on my back from."

"It was a negotiated point, let’s put it that way," said Steve Shimberg, who was chief counsel and staff director for then-Senate Environment and Public Works Chairman John Chafee, R-R.I.

The final version of the law set a $75 million liability cap on oil companies. To cover damages beyond $75 million, the law also strengthened the oil spill liability trust fund, which was originally created in the mid-1980s and is funded by a tax on oil companies of 8 cents per barrel. (Today, it is estimated to have $1.6 billion in the bank.) Those who worked on the '90 law cite as a success the fact that it didn't preempt states from setting liability limits for spills occurring under their jurisdiction.

Today, as Congress grapples with the Gulf spill fallout, liability limits are once again a sticking point, with the $75 million cap widely considered insufficient to cover the damages caused by this spill. Already, there are efforts from White House officials and congressional Democrats to raise the limits set by the '90 law. (The federal government retains jurisdiction because the spill took place in deeper, federal waters.) White House spokesman Robert Gibbs said this week that officials from the Office of Management and Budget are working with Capitol Hill to "significantly" increase the cap.

Lautenberg and two of his fellow drilling opponents -- Sens. Robert Menendez, D-N.J., and Bill Nelson, D-Fla. -- along with several House Democrats have a plan to increase the $75 million cap to $10 billion. Their proposal has the backing of both House Speaker Nancy Pelosi and Senate Majority Leader Harry Reid.

Congressional Democrats are seeking to eliminate the $1 billion per incident cap on claims against the spill liability trust fund, allowing those filing claims to collect from future fund revenues (with interest if necessary), and to scrap the $500 million limit regarding damages to natural resources.

To be fair, $75 million seemed to be a lot more arduous of a cap on industry liability 20 years ago. In fact, one of the concerns raised by oil companies was that the money they would be contributing to the trust fund would end up going unused or be shifted to other purposes. Due to a time limit trigger in the law, the trust fund was on the verge of bankruptcy a couple of years ago, underscoring arguments from oil industry backers that the ongoing Gulf spill is a rare calamity.

It was just last August that the nonpartisan Congressional Research Service made this observation: "Considering that U.S. oil consumption and oil imports have steadily increased, the trend of declining spill incidents and volume in past years is noteworthy."

Years of relatively safe drilling allowed Democratic leaders this year to dangle expanded offshore access to oil and gas companies as a way to entice Republicans and some moderate and conservative Democrats to swallow efforts to price and curb U.S. industrial greenhouse gas emissions.

President Obama on March 31 proposed allowing drilling along some of the East Coast, more waters in the Gulf of Mexico and off parts of the coast of Alaska. His blueprint -- along with the added bonus of guaranteeing coastal-producing states a share of the revenue of drilling production -- was initially copied and pasted as part of an evolving Senate carbon and energy strategy Democratic leaders are pushing this summer. "The general public was saying, maybe yes we can do this now," Shimberg said. "Now there’s this big red flag."

Obama has continued to defend the need to drill offshore, but has temporarily put the brakes on his blueprint in response to the spill. He has ordered Interior Secretary Ken Salazar to report within a month "on what, if any, additional precautions and technologies should be required to prevent accidents like this from happening again," Obama said April 30. "And we're going to make sure that any leases going forward have those safeguards."

An upcoming draft of a Senate climate and energy plan authored by Sens. John Kerry, D-Mass., Lindsey Graham, R-S.C., and Joe Lieberman, I/D-Conn., is expected to include more safeguards than initially were planned to protect coastal waters.

But this bipartisan comity is increasingly rare on Capitol Hill, especially compared to when the 1990 law was drafted.

"The dynamics of bipartisan cooperation have changed significantly up there," Shimberg said. "You don’t see the type of working across the aisle."

"The worst thing that happens to us, because of the bobbleheads on television, the Congress will get involved again," Young said. "And it won’t be from a scientific level. They won’t listen to I think cooler heads. They’ll do whatever is popular."

Darren Goode has covered energy, environment and transportation policies at CongressDaily since May 2004. He has more than a decade of reporting experience in Washington, DC, and received a journalism degree at the University of Georgia in 1997.