Fearful of missing something, longtime fans like me are doomed to watch until the last moments of the final season 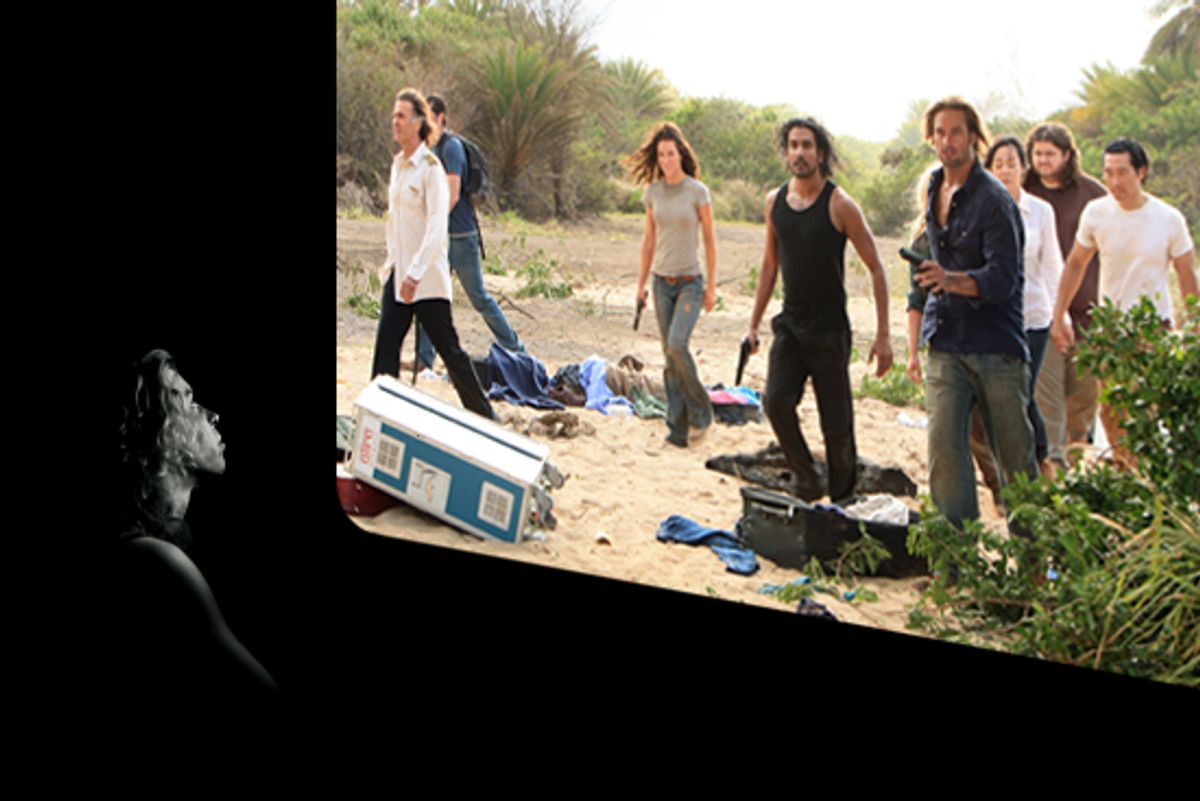 All our lives, we're plagued by the feeling that we might be missing something, somewhere. In second grade, we were haunted by the suspicion that Scarlet Berringer is probably playing "Charlie's Angels" on the kickball field without us. In high school, we were gripped by envy for those lucky Pleasant Valley kids, driving their sputtering mopeds to each other's makeout parties in the basements. In college, every time we stayed in our dorm rooms on a weekend night, we were unnerved by the sounds of woohooing, clinking bottles, and later, slurring and stumbling in the hallways.

Now that the information age has finally delivered on its decades-old promise to transform us into distracted shadows of our former selves, we're haunted continually by factoids, opinions and televised entertainments heartily embraced and endorsed by the nattering nabobs and twittering tweakers of the Internets. Even if we shun the continual onslaught of news about Justin Bieber's signature hairstyle or Sandra Bullock's brand-new, 100 percent authentic third-world infant souvenir, our socially mediated selves push us to keep up. Our personal brands demand that we remain consistent, that we continue to watch Rachel Maddow and read Michael Chabon and listen to the National, lest our "Followers" and "Friends" and other demi-associate members of our target demographics start to view us as impulsive, inconstant or -- heaven forbid -- complicated.

In other words, we have to keep watching "Lost."

Damn you, "Lost"! We went and jumped on your bandwagon way back in the first season, got sucked into your endless jungley maze and suspenseful chords, and waited breathlessly for the next shoe to drop, over and over again. Remember when that was still fun? Remember? Henry Gale's googly-eyed provocations? Michael shooting Ana Lucia in the gut? The impenetrable, nostalgia-inducing mysteries of the Dharma Initiative? Thanks to the brilliant character studies of the first season (we ignored the dumb monsters), thanks to the genius twists and turns of the second and third seasons, we're doomed to do our penance as the whole tale unravels in a messy heap.

Yes, one might say we're paying on back end for those halcyon days when The Others were still menacing and mysterious, when Michael was growing twitchy and nasty and looking dead set on betrayal, when Ben still seemed to hold the key to the whole island, when numbers and symbols and old films of the Dharma Initiative still seemed to add up to some malignant shadow, some dark design dreamed up by the gods or the Widmore Corp. or the Hanso Foundation.

And remember when Jack and Kate still showed some hope of being more than a couple of pretty faces, endlessly flashing the same grim and/or worried expressions and repeating the same phrases ("I have to find him!" "I'm coming with you!" "No, it's too dangerous!") like video game heroes? How fitting is it that Jin and Sun's last words to each other last week matched this endlessly repeating loop so perfectly? ("Please go!" "I won't leave you!") Oh, I get it: This scene is a flashback to every shitty B-movie ever made.

But let's focus on the good times, shall we? Remember when Jin and Sun spoke to each other in their native tongue? Remember when Locke was still alive, and cool, and wasn't a smoke monster?

Back then, like teenagers at a Baptist retreat, we thought the big, bad world would add up to something, that every confusing twist was laden with hidden meaning. Now we know better. Now we get up in the morning and put on our Sunday best and trudge off to church on the off-chance that the Lord Himself will appear and shine His glory on us in person. Now we watch because we were once "Lost" fans, and here it is the final season, and there are only a handful of episodes left. Even though the long-awaited answers we're looking for are offered in such blunt, unimaginative language that we feel like we're reading first drafts: "I'm a smoke monster." "You're going to have to kill the devil." "It's all meaningless if I have to force them to do anything." And if we wanted to waste six years in a Judeo-Christian allegory, we would've just followed a Jehovah's Witness home a long time ago. At least their Armageddon should be a little bit gripping and suspenseful.

Instead, each episode heaps on a fresh insult -- leaden dialogue, newer, dumber mysteries, implausible twists. Even as flash-sideways world starts to connect with the island, the underlying meaning -- Jacob as God, Locke as the devil, or (whoa, dude!) the exact opposite -- feels less rich and compelling than it ever has. And don't tell me that's inevitable. The entire island clearly doesn't have to boil down to some death match between Good and Evil; most of us were hoping for something a little more complex or nuanced than that.

So why haven't we been able to walk away? Well, what if we miss something?

What if Kate's head starts gushing rainbow sherbet? What if Ana Lucia comes back from the dead, and she stops by In-N-Out Burger on the way? What if Jacob turns out to be Bob Dylan? What if Bob-Dylan-really-Jacob takes Locke-really-smoke-monster by the throat and chokes the life out of him, but in the flash-sideways universe, Bob-Dylan-really-Jacob gets a job at a Hot Dog on a Stick and writes poetry in his basement that he never shows to anyone, not even the blond honey who works the register? What if the entire island is just a tattoo on Marilyn Manson's lily white butt cheek?

Sadly, though, as each new episode disappoints, it's harder to get excited about anything, whether it's a major revelation or the death (We mean it this time!) of beloved characters like Sun and Jin. When Jack sobs openly on the beach, we feel removed from the moment. We wonder what Matthew Fox focused on, to conjure up those tears. As Sayid once said, "I don't feel anything. Anger, happiness, pain, I don't feel it anymore."

"Maybe that's best, Sayid. It'll help you get through what's coming," Smoke monster Locke responded. So this final season of "Lost" is designed to spare us from missing "Lost" unduly? Mission accomplished!

Or, as Charles Widmore put it, "Everything else I know is a combination of myths, ghost stories, and jungles in the night." Too bad. We were hoping for so much more.