For Tea Party, a slogan that would make Don Draper proud

Its implications are troubling, but you've got to hand it to them: "I want my country back!" sure is catchy 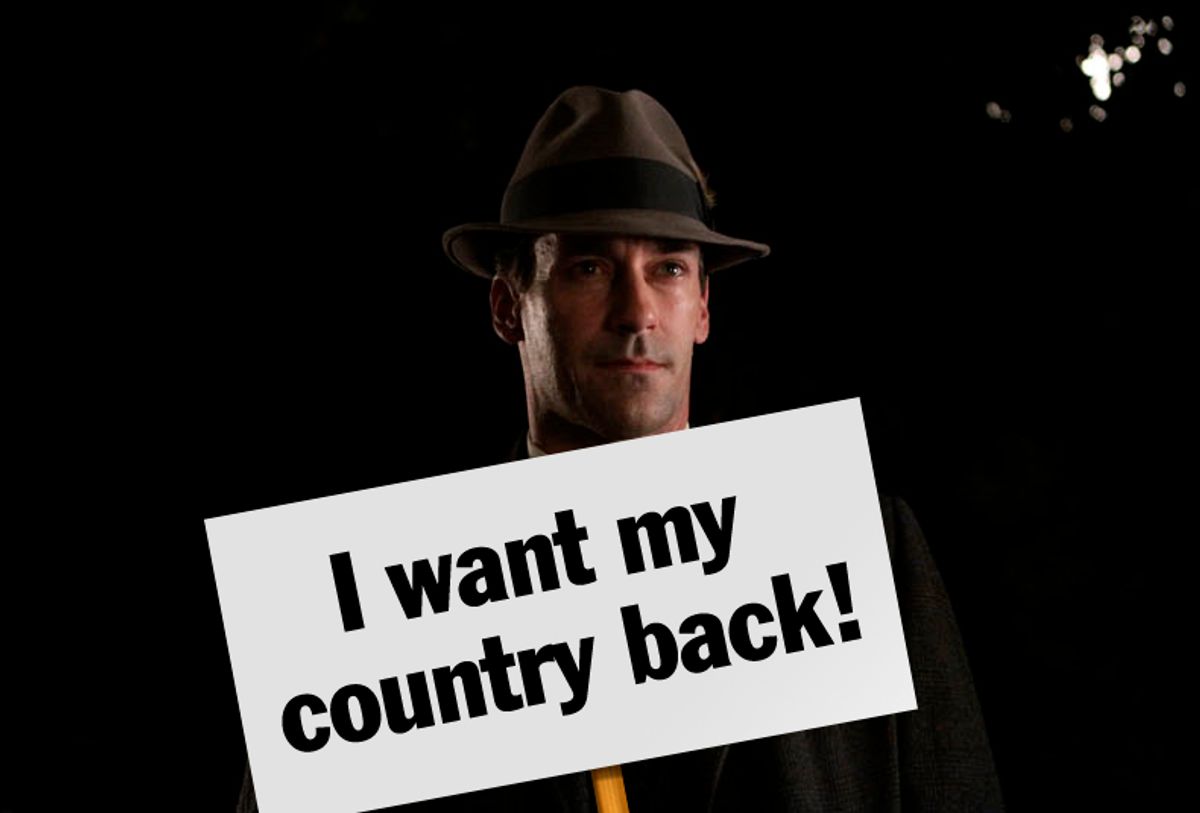 For most of us, conjuring concise and cogent catchphrases is nearly impossible. In fact, the skill can seem like the black magic of mystical madmen.

During the 1960s, the most influential of these Svengalis were the executives working in Madison Avenue advertising firms. By contrast, 2010's most effective madmen come from Main Street and are literally angry men — specifically, the Tea Party crowd that is, according to new polls, more wealthy, more white, more male, more Republican and more motivated by racial resentment than the general population. And though their jeans and baseball caps are less stylish than Don Draper's suits and fedoras, these anti-government activists deserve recognition: They have crafted a motto as succinctly expressive and manipulative as the best Sterling Cooper innovation.

"I Want My Country Back" — this ubiquitous Tea Party mantra belongs next to Nike's "Just Do It" on Ad Age's list of the most transcendent idioms. In just five words, it perfectly captures the era’s conservative backlash. Take a moment to ponder the slogan's phrase-by-phrase etymology:

"I Want" — Humanity's most atavistic exclamation of selfishness — and thus the appropriate introduction for a Tea Party motto — this caveman grunt may end up being the epitaph on the nation's tombstone. America once flourished by valuing what "we" — as in We the People — need (food, shelter, infrastructure, etc.). Conversely, today's America teeters, thanks to a Reagan-infused zeitgeist that reoriented us to worshiping whatever I the Person wants. High-income tax breaks, smog-belching SUVs, cavernous McMansions carved into pristine wilderness — it doesn't matter how frivolous the individual craving or how detached it is from necessity. What matters is that the "I" now assumes an entitled right to any desire irrespective of its affront to the allegedly Marxist "we."

"My Country" — In his quintessentially American ditty, Woody Guthrie said, "This land was made for you and me." It made sense. In a democracy, the country is We the People's — that is, everybody's. If, over time, our diversifying complexion and changing attitudes create political shifts, that's OK — because it's not "my country" or "your country"; it's all of ours. Apparently, though, this principle is no longer sacred. Following two elections that saw conservative ideology rejected, Tea Party activists have resorted to declaring that there can only be one kind of country — theirs.

"Back" — To underscore feelings of grievance and nostalgia, the slogan ends with a word deliberately implying both theft and resurrection. In Tea Party mythology, "back" means taking back a political system that was supposedly pilfered (even though it was taken via legitimate elections) and then going back to a time that seems ideal. As one Tea Party leader told the New York Times: "Things we had in the '50s were better."

To the Tea Party demographic, this certainly rings true. Yes, in apartheid America circa 1950, rich white males were more socially and economically privileged relative to other groups than they are even now. Of course, for those least likely to support the Tea Party — read: minorities — the '50s were, ahem, not so great, considering the decade’s brutal intensification of Jim Crow.

But then, that's the marketing virtuosity of the "I Want My Country Back" slogan. A motto that would be called treasonous if uttered by throngs of blacks, Latinos or Native Americans has been deftly sculpted by conservatives into an accepted clarion call for white power. Cloaked in the proud patois of patriotism and protest, the refrain has become a dog whistle to a Caucasian population that feels threatened by impending demographic and public policy changes.

As a marketing masterpiece, the slogan would certainly impress the old Madison Avenue mavens. The trouble is that as a larger political ideology, its hateful and divisive message is encouraging ever more misguided madness.