In Utah, the Tea Party crowd claims a senatorial scalp

Irate members of the Republican Party base gather in Salt Lake City and end the career of a three-term U.S. senator 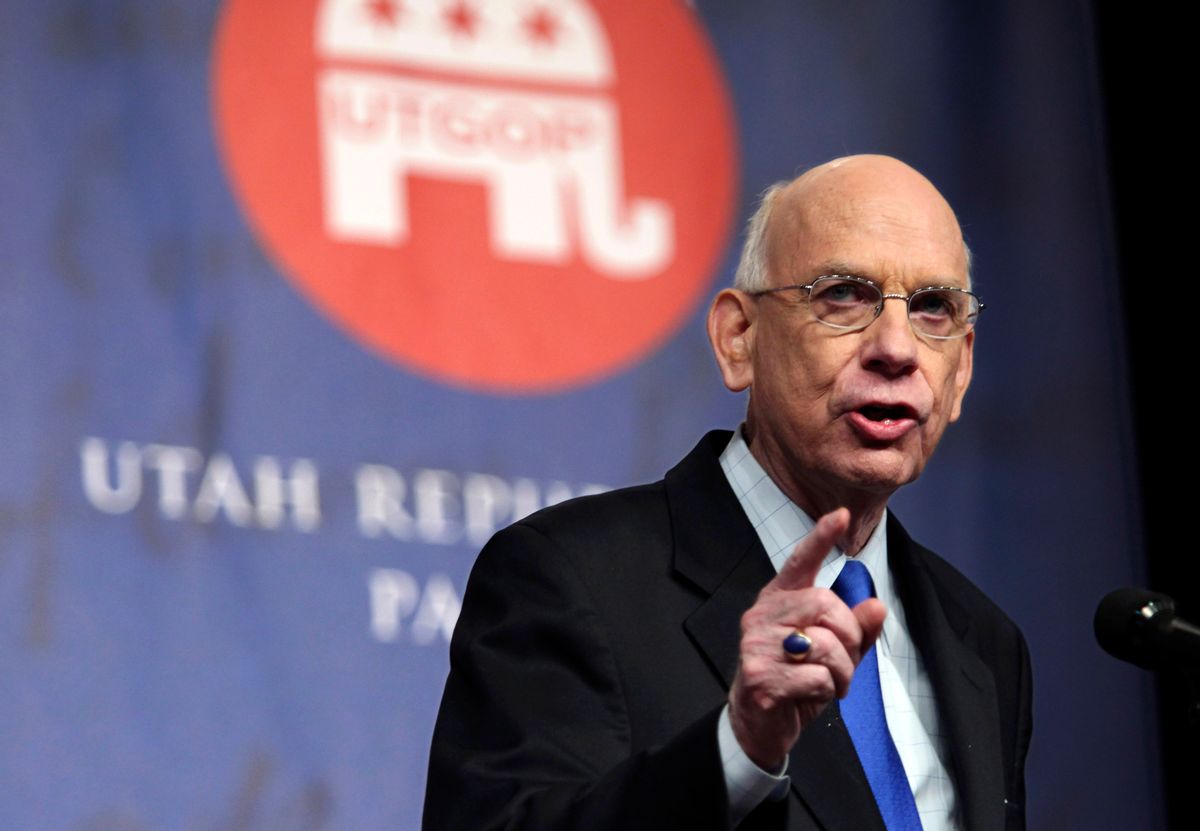 SALT LAKE CITY -- From the outset of Saturday's Utah Republican Convention, it was clear that Sen. Robert Bennett faced a major fight to even survive to a primary. Delegates seemed most energized when given the opportunity to throw political punches, whether it was booing pictures of national Democratic leaders or cheering any mention of God, the Constitution, or Ronald Reagan.

Bennett's political career ended at just after 3 P.M. local time in downtown Salt Lake City, when the Republicans eliminated him as a candidate, with only 27 percent of the 3,500 delegates supporting him. One ballot later it was decided that there would be a primary between Tim Bridgewater and Mike Lee, with the winner of that race almost assuredly the next senator from reliably Republican Utah.

Even Bennett realized early in the day that his career was, very likely, about to end. In its last-ditch bid for survival, his campaign went with a personal pitch, dispensing paraphernalia that depicted the 76-year-old lawmaker as a friend, a neighbor, a grandfather. His campaign signs included hand-painted placards with phrases like "Vote for my grandpa," and he was introduced by Mitt Romney as a "man of faith and family."

In both of his speeches -- candidates had seven minutes before the first ballot and one minute after the second ballot -- Bennett emphasized how valuable his experience would be in Washington, especially with the potential incumbent carnage this November.

"I can do this because I now have tools that I lacked as a freshman," Bennett said. "Let me use them .... I don't want to walk into retirement."

Delegates, however, did not buy that experience was a necessary qualification. Instead, they wanted a new face who would stand for conservative principles instead of crossing the aisle to craft a healthcare reform plan, as Bennett did. There was also obvious frustration with his vote in favor of the Troubled Assets Relief Program (TARP), although little mention of it was made by candidates.

After his loss, a tearful Bennett told a roomful of media members that he did not regret any of his political decisions, and had done his best to represent Utah.

"The political atmosphere has been toxic. It's clear that some of the votes I cast added to that toxicity," he said. "Looking back, I wouldn't change them."

Although Utah has a very unique political system that gives more weight to activist wings of parties -- a fact proven by Democratic Rep. Jim Matheson being forced into a primary by a challenger, Claudia Wright, who was backed by environmentalists and is a lesbian -- delegates and candidates said that the results portend badly for incumbents around the country.

"There's a lot of frustration with the economy, with Barack Obama's shift to the left ... it is a symptom of a larger problem," Bridgewater said. Later, he said that during the primary campaign, he would continue to "send a message to Washington, D.C. that they have to stop this out-of-control spending that is bankrupting our country."

Challenger Cherilyn Eagar, who finished fourth and lost in the first round with 15 percent of the vote, delivered a speech that got delegates foaming at the mouth. She touched on all of the hot-button issues, especially for the arch-conservative, Tea Party/Project 9-12 crowd, ranging from immigration to withdrawing from the United Nations.

"This isn't unique," she said after her speech. "Across the country, absolutely, there is a challenge to incumbents."

Eagar's speech was indicative of a day that resembled a Tea Party rally, at least at times. In speeches by candidates in many other races -- includingfor  governor and for Utah's U.S. House seats -- the divinely-inspired Constitution, the need for a second Reagan Revolution, the danger of open borders, were primary talking points.

Amazingly, almost all of the elected delegates showed up at convention, which supporters of Utah's caucus system said reinforced the reason why it's superior.

Many of those delegates were first-timers, and their thirst for action beyond typical politics was apparent. For them, this was politics as hockey, and they wanted fights. They wanted blood on the ice.