The 88-year-old lives up to expectations, despite jokes about "drier, crustier" old lady parts 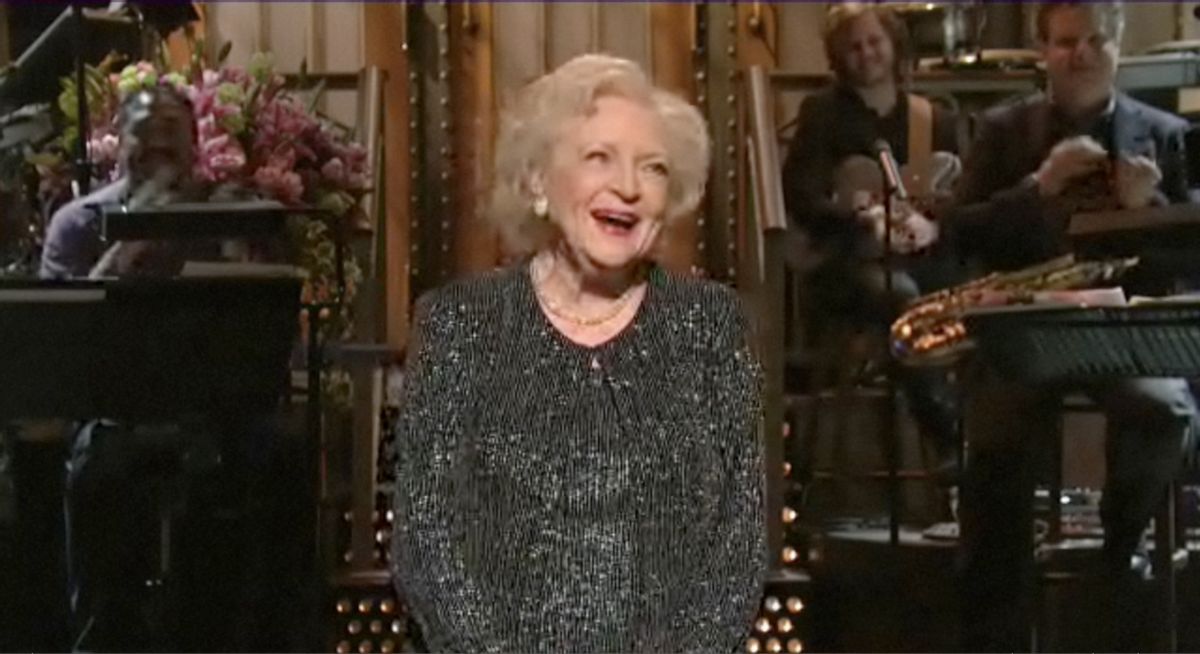 Screw you, sexism and ageism -- Betty White is the new black.

The 88-year-old funny woman, with a career spanning over seven decades, is now the oldest person to host "SNL." But, while she introduced musical guest Jay-Z in old-lady cruise wear, White was sharp, charming, and not the least bit out of place. Her monologue alone made my face hurt from smiling. Would it be too much to say I think I'm gay for Betty White? Because I think I officially am.

This personal revelation comes courtesy of the Facebook campaign "Betty White to host SNL (please)," in which people rallied for White with a solidarity and determination not seen or felt since the 2008 Presidential election. In her monologue, the hands-down highlight of the show, White thanked Facebook, even though she said she didn't know what Facebook was just a few months ago. Now that she knows what it is, she said, "it sounds like a huge waste of time." In a note of seriousness, White confided, "I'm here tonight because you wanted me to be." Maybe I'm emotional because it's Mother's Day -- or because I'm a woman -- but I am overwhelmed by the deluge of optimism and support for a female comedian whose career zenith was decades ago in "The Mary Tyler Moore Show" and "The Golden Girls."

The show's opening skit was a sendup in honor of Mother's Day, and when White appeared, she received a riotous cheer. She was not even to be outdone by guest stars Tina Fey, Amy Poehler, Rachel Dratch, Molly Shannon, Ana Gasteyer and Maya Rudolph. In three separate "MacGruber" skits -- a recurring sketch that parodies "MacGyver" -- White played the nana in an electric scooter and told stories of when little MacGruber finger painted with his "little poopies" on the wall and the family called him "Poopcasso." Sure, "SNL" fell back on the old-lady stereotype here, but it wasn't hackneyed when MacGruber had a sensitive moment and cooed, "It's a shame in our society that you can't marry your own grandma ... or can you?" and then proposed and then near-kissed his pretend grandmother. The show was all about showing White love -- even Jay-Z dedicated a song, "Forever Young," fittingly enough, "to the most incredible Betty White."

It's clear White is still funny, even in an age of YouTube disposability. She taps into an older idea that runs from Shakespeare to Upright Citizens Brigade: funny is funny. It is not manufactured or cleverly marketed. What strikes us, what makes us laugh, endures through the ages -- just like White.

That isn't to say that she's immune to the lazy writing of post-Tina "SNL": In "The Delicious Dish" skit with veterans Shannon and Gasteyer, White played a baker whose muffins were "remarkably velvety," instead of "a drier, crustier muffin" of an older generation. This hardly-veiled euphemism to Betty White's old lady vagina is cheap and, basically, unnecessary. White couldn't singlehandedly save the show and make it as funny as it used to be. But MacGruber nails it when he says to White's character, "You set the bar too darn high."