Avoiding the ash plume meant flying far north over Greenland. Sure, it added time, but the views were spectacular 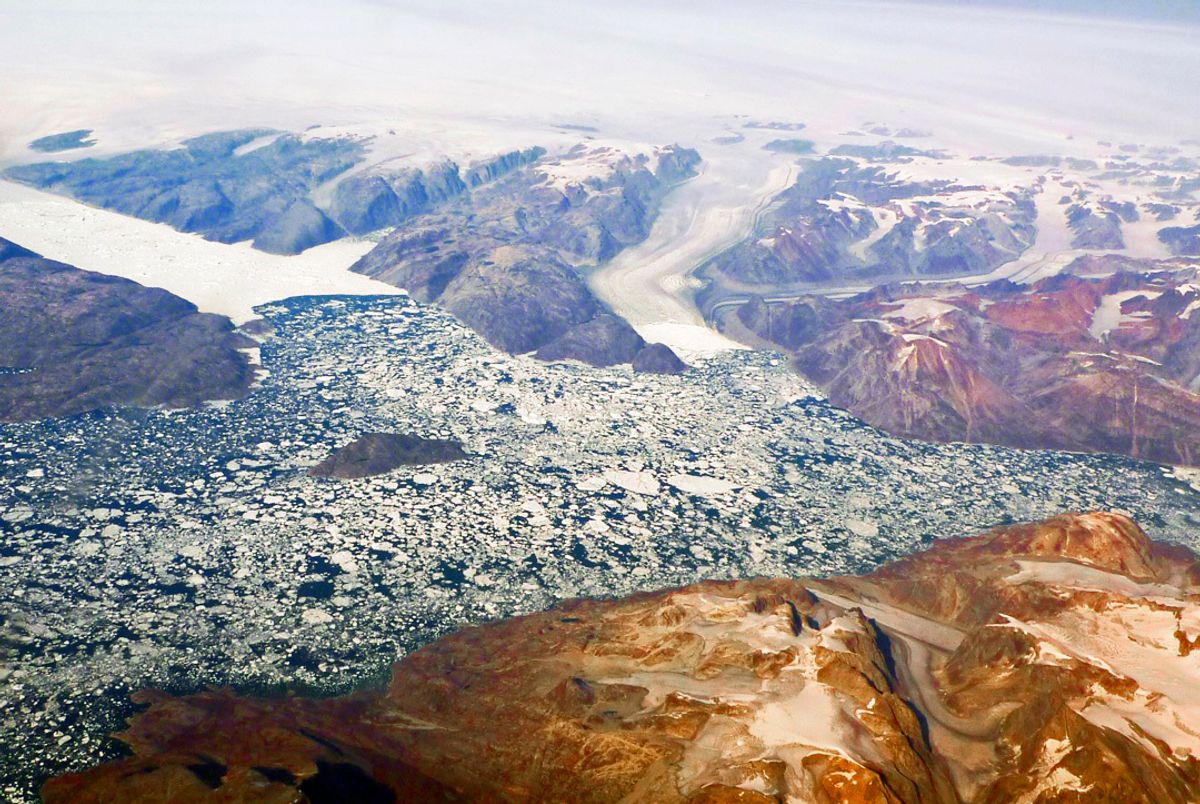 Our Icelandic friend Eyjafallalocalyokel has been causing trouble again. Don't tell me about it. The other evening I was working a trip home from the Middle East. Our usual flying time on this trip is around 11½ hours. This time, routed far to the north to avoid the ash plume, it was a full 13 hours. This meant carrying nearly maximum fuel, which in turn meant a payload restriction that caused us to leave behind several passengers and much cargo.

We passed over Poland, Sweden and Norway before proceeding north of Iceland all the way to 70 degrees latitude, above the Arctic Circle and over the heart of Greenland.

As frequent transatlantic fliers know, routings over Greenland aren't uncommon even in normal times, depending on traffic flow and the location of the jet streams. Keep an eye on the moving map display on the seat back in front of you. If you are going to pass over Greenland, be sure to crack open your window shade, lest you miss one of the most spectacular views ever to be seen from 35,000 feet. The picture above was snapped from the cabin on such a crossing. As was this one, and this one.

Along the coast you can see fields of enormous icebergs drifting below, their twisted, wind-sculpted tops discernible even from seven miles up.

Too many times I've watched passengers sitting there with their shades drawn, oblivious to the entire show. They don't deserve window seats.

Even if you're not venturing as far north as Greenland, you can usually catch great views of upper Quebec, Labrador or Newfoundland. The expansive emptiness of northeastern Canada is really something to behold.

These northerly crossings between the U.S. and Europe often confuse people. This is something I've covered before, but it's owed a review seeing how I'm consistently asked about it.

Flying over Canada, Iceland or Greenland has nothing to do with potential emergencies -- i.e., keeping close to airports in case a diversion is needed. It's simply the shortest distance. Remember, the Earth is round, and what looks like the shortest route on a flat map is not the shortest distance on a sphere. Between continents, airplanes do not fly the straight lines suggested by a wall map or atlas. They follow what are called "great circle" routes, the leanest mileage totals along a sphere, accounting for the earth's curvature.

This is somewhat difficult to explain, but easy to visualize if you have a globe handy. Measuring with a piece of string, it's obvious that the shortest distance between New York and Hong Kong, for instance, is not westerly, as it would seem on a flat map, but pretty much straight north, into the Arctic, and then straight south. Over the top, in other words. If you're flying this route, don't be baffled when you see the frozen Hudson Bay and Siberian tundra passing beneath you rather than the Golden Gate Bridge and azure Pacific seas.

That's the extreme, but the principle applies to many long-range pairings, and this is why passengers between America and Europe discover themselves not just high up, but high up.

One of my favorite stories is about the time, one night at Kennedy airport, when I gave what I thought were accurate instructions to a group of Muslims crouched on the floor looking for Mecca. It seemed to me they were facing more toward Bridgeport, Conn., and I suggested they adjust their prayer rugs a few southeastward degrees. I should have known better, because the most efficient routing between New York and Mecca is not southeast, but northeast.

Required to periodically align themselves with a point thousands of miles away, many Muslims know how this works. To face the holy Kaaba at Mecca, they employ what's called the Qibla, which is the shortest distance to Mecca from where they're standing (or crouching) -- a kind of Islamic great circle. (It is said Mohammed could ascertain the Qibla from anywhere without aid of scientific instruments). My friends at Kennedy were searching for their Qibla, only to find quibble instead with an itinerant pilot who was thinking flat when he should've been thinking round.

That was 1998 or so. Group prayers at airports are liable to draw a little more attention these days, I think -- especially those whose trappings include prayer rugs and skullcaps.

You may have noticed, by the way, that in my opening paragraph I spelled the name of Eyjafjallajökull volcano incorrectly. That was on purpose, because at the time I was too lazy to look it up.

And really, would anyone notice? No offense to the Icelanders out there, but I am told that "Eyjafjallajökull" translates roughly to "alphabet bomb."

Speaking of bombs, did you happen to catch the final episode of "Bill Moyers' Journal" two Fridays ago on PBS? Moyers' show was one of the best things on public television -- his closing monologues in particular were often riveting -- but he really went out with a whimper.

He finished up with a mostly boring interview with the essayist/novelist Barry Lopez. Not that it would have come up during the interview in a million years, but there's an airplane connection here.

Lopez's essay collection "About This Life: Journeys on the Threshold of Memory" contains a piece called "Flight," in which the author travels around the world in a KLM freighter, riding as a guest in the cockpit. It's an excellent story, and contains my favorite-ever meditation on my favorite-ever plane, the 747. He compares the aircraft to the quintessential symbol of another era -- the Gothic cathedral of 12th-century Europe.

"Standing on the main deck," Lopez writes, "where 'nave' meets 'transept,' and looking up toward the pilots' 'chancel' ... The machine was magnificent, beautiful, complex as an insoluble murmur of quadratic equations."

There aren't many people eloquent enough, or daring enough, in this day and age, to speak of an airplane like that.