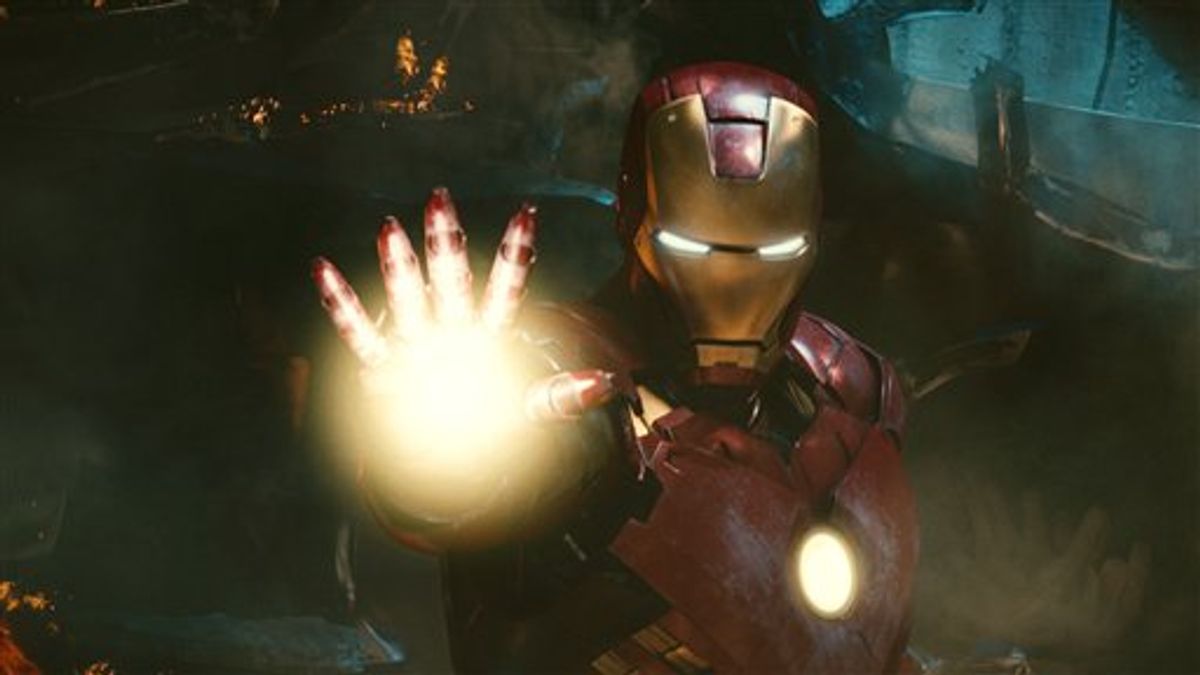 Tony Stark piloted to the top of the box office but not the record books.

"Iron Man 2," the sequel starring Robert Downey Jr. as Marvel's gadget-happy billionaire superhero, earned $133.6 million domestically on its opening weekend, according to distributor Paramount Pictures' estimates Sunday. The opening rocketed past the original $98.6 million debut in 2008 and landed the record as the fifth-biggest opening weekend.

"We're thrilled with the combination of the way it's playing across the board," said Don Harris, Paramount's vice president of distribution. "It's playing as a fanboy movie, but it's also playing as family movie, too. I even know a bunch of people who are planning to take their mothers to see 'Iron Man 2' on Mother's Day, which really made me chuckle."

"Iron Man 2" has taken in $194 million overseas since it debuted in many international markets last week, bringing its worldwide total to over $327 million. While Hollywood blockbusters typically open around the same date in most countries, some get an overseas jump of a week or more on their U.S. debuts. The biggest opening came from China with $7.3 million.

"It's a perfect kickoff to the summer of 2010," said Paul Dergarabedian, box office analyst for Hollywood.com. "It literally sets the tone for the entire summer movie season. To have the fifth biggest opening week of all time certainly sends a message that this summer season is going to make its mark. Audiences really do get caught up in that."

The victory of "Iron Man 2," which is only available in 2-D, comes at time when 3-D films like "Avatar" and "Alice in Wonderland" have recently dominated the box office. IMAX chairman and president Greg Foster said the $10.2 million earned by "Iron Man 2" from IMAX theaters set IMAX's 2-D record, beating out the $8.5 million debut of "Star Trek" last year.

"I think people recognize IMAX is the way to see blockbuster titles, whether it's a 2-D or 3-D movie," he said.

The film continues the story of Stark, a genius industrialist who builds metal suits loaded with gadgets. In the follow-up, the superhero employs the assistance of his longtime friend and fellow crime fighter James Rhodes, played by Don Cheadle, to battle baddies such as Whiplash, a nasty villain with his own high-tech arsenal, played by Mickey Rourke.

"When we opened the original 'Iron Man,' it seemed to be one of the lesser known properties in the Marvel galaxy," said Paramount's Harris. "Two years later, it's one of the most beloved characters. I think the people at Marvel are incredibly bullish about how future 'Iron Man' movies might do and how 'Iron Man' interacts with their other characters."

"Iron Man 2" was untouchable at this weekend's box office though. The previous weekend's No. 1 movie, the Warner Bros. remake of "A Nightmare on Elm Street," fell to No. 2 with $9.1 million, clawing to a total of $48.5 million. DreamWorks Animation's "How to Train Your Dragon" remained at No. 3 with $6.7 million, bringing its seven-week total to $201 million.

"Babies," the Focus Features documentary that tracks four tots during the first year of their lives, was the only other new release, debuting in 534 theaters at the No. 10 spot with $1.5 million. Hollywood.com's Dergarabedian said "Babies" could continue to crawl along this summer as an alternative to flicks like "Robin Hood" and "Prince of Persia."

Estimated ticket sales for Friday through Sunday at U.S. and Canadian theaters, according to Hollywood.com; final figures will be released Monday: