Who are the real winners in Europe's bailout?

It's supposed to be the people of Europe's poorer nations. But it's actually rich countries and their banks 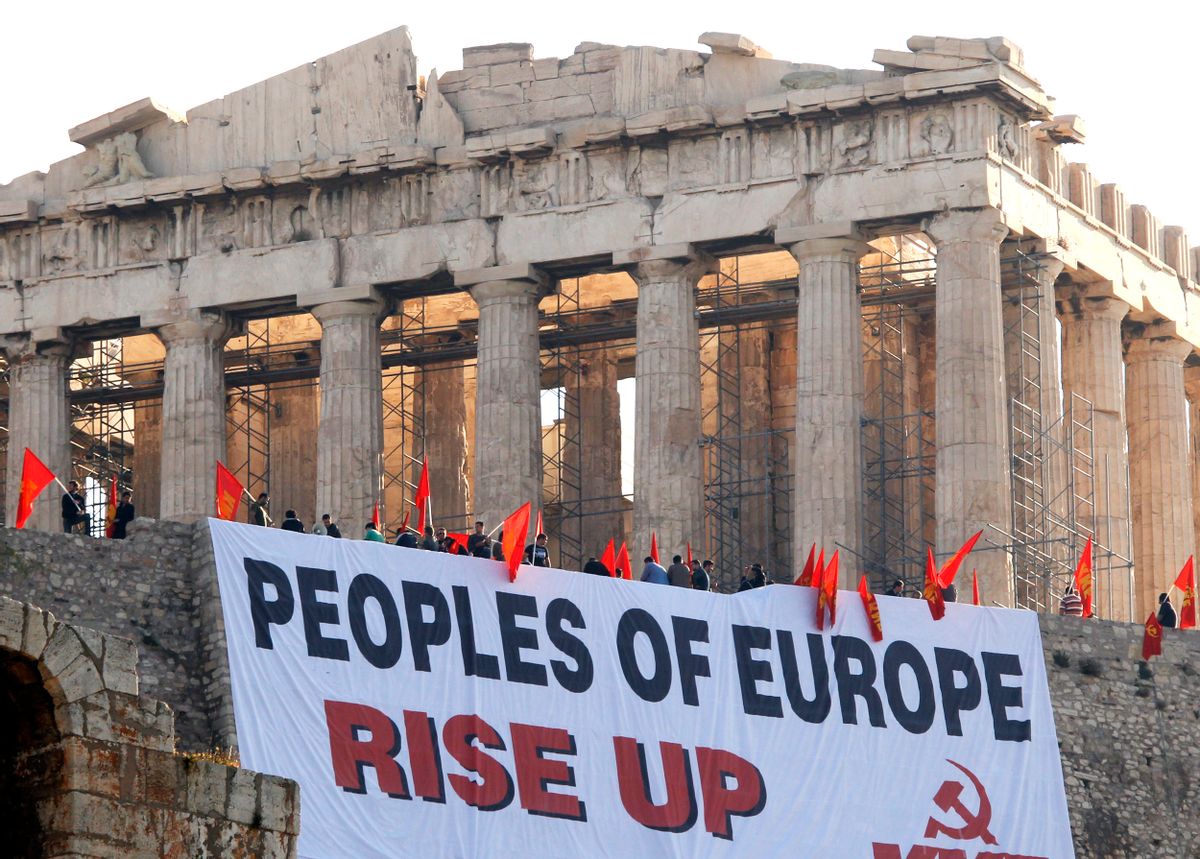 A giant banner protesting Greece's austerity measures hangs near the Parthenon on Acropolis hill in Athens early May 4, 2010. A group of demonstrators from Greece's communist party, KKE, staged the protest atop the Acropolis as Athens braced for a 48-hour nationwide strike by civil servants which would also include the shutdown of travel services. REUTERS/Pascal Rossignol (GREECE - Tags: EMPLOYMENT BUSINESS POLITICS CIVIL UNREST) (Reuters)
--

On Sunday, the European Union and the International Monetary Fund announced they were creating a $955 billion fund to rescue eurozone economies that find themselves in financial peril. This announcement came less than five days after the EU had decided to make $140 billion available to Greece to aid in its recovery.

What few people realize is that the banks holding a substantial portion of Greece's $430 billion of government debt are not being asked to take a single dollar haircut to their investment. This is highly unusual for restructurings that involve the IMF. Typically, to receive IMF funding, a country must engage in not only budgetary and fiscal tightening, but also haircuts to the banks and other debt investors. The idea that companies and countries can restructure without debt investors losing a penny is a relatively new phenomenon. Hank Paulson and Ben Bernanke pretty much invented it when they bailed out Fannie Mae and Freddie Mac, Bear Stearns, Citibank, Goldman Sachs, Morgan Stanley, Merrill Lynch, Bank of America, Morgan Guaranty and AIG and assured that all of their creditors were paid off at 100 cents on the dollar. And the Greek government debt works out to almost $170,000 per household, which, by definition, is unsustainable and needs restructuring.

People may think that the beneficiaries of this EU largess are the poorer countries of Europe and their people, who have suffered through high unemployment and domestic economies weakened by the crisis. But if the banks lending to countries such as Greece, Portugal, Ireland, Spain and Italy are going to be repaid in full from the proceeds of these EU and IMF programs, then maybe we need to rethink who actually is benefiting from these programs. This is not lost on the people of Greece, 100,000 of whom took to the streets last week to protest cuts in their government's budget, which was part of the Greek bailout plan. Nor is it lost on Wall Street: on Monday, European bank stocks shot up an average of 20 percent -- a sign that traders are well aware of who the primary beneficiaries of the bailout plan will be.

At first blush, it does appear that some of these poorer European nations have significant amounts of government debt and are running fairly large annual budget deficits. Following are the levels of government debt for a selection of countries, mostly of the Organisation for Economic Cooperation and Development (OECD), expressed as a percentage of each country’s GDP:

Government debt as a percentage of GDP

Investors become concerned when government debt exceeds 100 percent of GDP, which explains Greece's and Italy's predicaments. Portugal is right behind them. But based solely on current debt levels, it's not clear what the investors' concerns are about Ireland and Spain. I also can't explain Japan’s poor debt ranking, other than to say that it looks completely unsustainable.

Of course, current country debt levels do not tell the full story as to which countries are most at risk of defaulting. Annual government budget deficits are also important because they can add annually to the country's debt burden. Similarly, expected growth rates of GDP are very important because as troubled countries’ economies shrink, their debt loads become ever more burdensome.

Europe's problems are not limited solely to Greece, Portugal, Ireland, Spain and Italy. These five countries in total owe $1 trillion to France and their banks, they owe Germany $700 billion, and they owe Britain $400 billion -- not to mention the money they owe the Swiss and U.S. banks. If these five countries were to default, the problem would quickly shift to the richest nations of Europe. This is the real reason for the announced bailouts. And it is not just the wealthier countries' banks that are being bailed out here; the governments of some wealthier European countries would themselves come under great financial pressure if these loans were not repaid, since they would then have to deal with enormous losses in their own banking sectors.

If the banks in these wealthier European nations were to suffer substantial losses from their sovereign debt investments, you can be sure that their governments would try to bail them out and make them whole. But this may not be as easy as it seems. It turns out that the size of the banking systems in many wealthier European countries far exceeds the total GDP of the country. Here is some summary data for the countries (most of them OECD members) in which the total of all bank assets exceed 100 percent of GDP.

Bank assets as a percentage of GDP

(For comparison, total banking assets in the U.S. are equal to approximately 82 percent of GDP.)

It's now obvious why Ireland is included in the troubled country category: Its banks assets are close to nine times as big as its total GDP, and all banks across Europe face substantial losses to their loan portfolios. Certainly real estate investments and sovereign credit investing will remain trouble for the banks, but as the recession and unemployment linger, consumer and corporate lending will also become problematic to the banks.

Switzerland has banks with assets of more than seven times its GDP. For the United Kingdom, banks have close to four times as much in assets as the GDP. And in France, Austria, Sweden, Belgium, the Netherlands and Denmark, the ratios are all between 3- and 5-to-1. Certainly, one can see that if the troubled nations of Europe, like Greece, fail to repay their loans to these banks in full, not only would the banks get in trouble, but these very large wealthy nations could quickly find themselves with an insurmountable problem on their books.

This situation is all very similar to the subprime mortgage crisis that started in the United States in 2007. In both cases, European banks bought what they thought were AAA assets, CDO tranches and sovereign debt, only to find out that the ratings were terribly overstated. AAA tranches of some CDOs are now experiencing 93 percent default rates.

In each case, the rating agencies played an important and conspiratorial role in labeling many CDO securities and most sovereign credits as AAA. This is important because banks in Europe are now able to hold such AAA securities on their balance sheets with little to no capital reserves held against them. In essence, this means that the banks can hold these AAA assets with infinite leverage. And that is pretty much what they've done: the leverage of these European banks sometimes exceeds 35- or 40-to-1.

So in both the subprime crisis and now the sovereign debt crisis, the banks loaned too much money to inferior debtors with too much bank leverage based solely on the opinion of a rating agency. Clearly, the bank that over-lent was more at fault than either the homeowner or the borrowing country. In both cases, the homeowner and the government of the sovereign nation may have done stupid things with the money, but the real stupidity was the banks lending in the first place. Clearly, if anyone should be blamed for these crises, it's the banks that over-lent -- and therefore it is the banks that should suffer most of the pain in restructuring. If I were advising Greece, I would tell it to default on its debts and force its creditors to take an 85 percent haircut. This would put the true cost of the crisis on those most responsible -- the banks, not the people of Greece.

If you want to predict which countries of Europe face possible default risk in the future, it's not enough to just look at current levels of government debt. I have created a forecast of how bad things might get for the countries of Europe by looking at a hypothetical future in which the governments are forced to make their own banks whole on losses equal to 10 percent of total bank assets by country. This might seem like an extreme loss scenario until you realize that Citibank has already been made whole on 15 percent of its assets by guarantees from the U.S. government and that people are expecting Fannie Mae and Freddie Mac to realize losses of more than 20 percent of their total assets before their restructuring is complete.

In addition, I assumed very little real growth for these countries in the future, which is reasonable because they have to deal with this banking and government crisis and because their citizens are aging rapidly and they are losing valuable members of their labor force to retirement. To account for increases in future debt loads due to ongoing government deficits, I took each country's current annual deficit, multiplied by seven, and added it to the country's total debt. The following table is an estimate of how bad things might get in the near future for the countries that end up with more than 100 percent of their GDP in government debt under this formulation.

It is apparent that Greece, Ireland, Italy and Portugal are all troubled and face real default risks. Spain, less so. But it is also apparent that some of the largest countries of the world will also face very severe consequences in trying to repair their banks' balance sheets. I don't see how Japan can escape this fate given that its debt, seen here, will be close to triple the size of its GDP. Similarly, Luxembourg, the United Kingdom, France, Iceland, Denmark, the Netherlands, Austria and the United States are at severe risk of getting into financial trouble as a direct result of these banking crises.

In 2008, I wrote a book titled "Contagion," in which I warned that the subprime mortgage crisis that started in the U.S. would spread to prime mortgages, infect the financial stability of the largest city and state governments in the U.S., and eventually spread to impact most of the nations of the world, especially in Europe. This latest sovereign debt crisis adds fuel to that fire. The solution cannot continue to be the bailouts of banks at 100 cents on the dollar at the expense of taxpayers and citizens. A debt crisis cannot be solved with more debt. We must find a way to reduce the debt levels of all banks, corporations, citizens and countries so that we are better poised for real growth and prosperity in the future.

John R. Talbott is a best-selling author whose 2003 book, "The Coming Crash in the Housing Market," predicted much of the recent financial crisis. He is currently working to eliminate the power of corporate and banking lobbyists in Washington. Those interested in helping can reach Mr. Talbott at johntalbs@gmail.com

John R. Talbott is the author of "Obamanomics" and "The 86 Biggest Lies on Wall Street."