Will the great recession lead to World War IV? 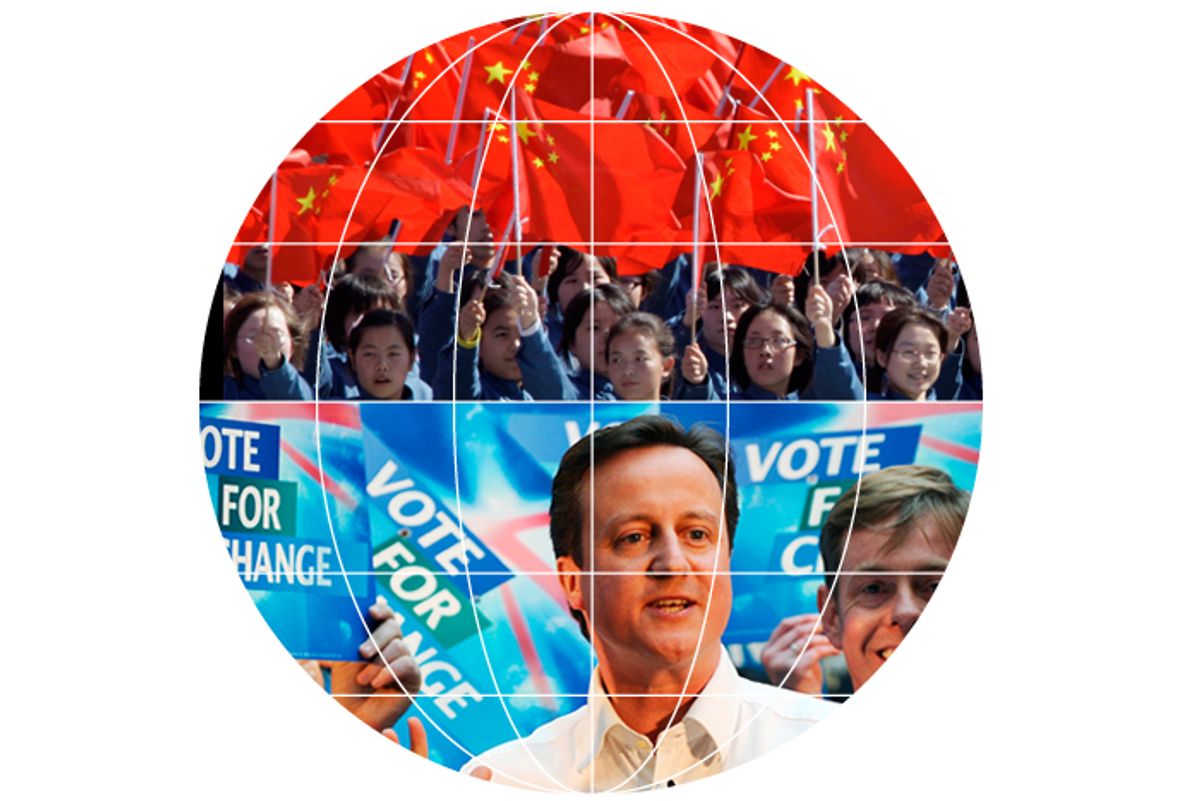 The final resolution of last week's British election is unclear. What is clear is that the results marked a defeat for the ruling Labour Party, which received less than 30 percent of the vote nationally. Already, Prime Minister Gordon Brown has fallen on his sword, and if Labour manages to cling to power now, it will only be in a tenuous alliance with the Liberal Democrats and a handful of tiny parties. Meanwhile, David Cameron's Conservative Party, which received more votes than any other party, is in talks with the third-place Liberal Democrats to form a government.

If those talks succeed, it will mean that every major country in Western Europe except Spain will be governed by a party of the right. The potential Tory restoration is part of a global pattern. The socialist left is moribund and the center-left is in retreat -- not least in the United States, where President Obama has moved well to the right on many issues, from healthcare to deficit reduction, where progressive senators and members of Congress are retiring to avoid defeat, and where the increasingly hard-right Republicans are expected to make gains in this fall’s elections.

To those accustomed to thinking of the left-right spectrum in economic terms, the success of the recession-era right might seem peculiar. After all, you would think that the collapse of the deregulated financial system that helped cause the great recession would have discredited the market-worshiping right. And you would think that there would be a comeback by the economic left, which has traditionally distrusted Utopian claims about free markets.

This is not happening for two reasons. One is the success of the Third Way. The Third Way was the transatlantic project that united Clinton Democrats, Blair Labourites, and many European and Latin American parties of the left in a common enterprise of reinvention. The transatlantic center-left distanced itself from statism, turned its back on organized labor and embraced the financiers of Wall Street and the City of London, who showered them with campaign donations. With the zeal of converts, the leaders of center-left parties like Blair and Brown and Clinton and Obama sang the praises of free markets, free trade, privatization and deregulation. These so-called neoliberals abandoned working-class voters who looked to government and unions to protect them against economic upheaval, and sought a new constituency among the liberal rich and upscale members of the professional class who combined free-market conservatism with tolerant social views and support for means-tested government charity for the poor.

The other reason is bad timing. The neoliberals adopted a modified version of libertarianism just a few years before the Crash of 2008 exposed the fallacies that justified it. Most politicians, however, are influenced by the worldview of their formative years, not their mature years, so that when they assume power they are usually a decade or a generation out of date. Barack Obama, for example, was shaped by the experience of the Reagan and Clinton years, when Democrats were on the defensive and sought to distance themselves from mid-century New Deal liberalism, as Bill Clinton did when he declared: “The era of big government is over.” Expecting the Blairites and Clintonites who have populated the cabinets of Gordon Brown and Barack Obama to rethink their obsolete 1990s neoliberalism in the 2010s in response to real-world events is like expecting an oil tanker to turn on a dime.

The decision in the last generation of the Third Way "progressives" to be more pro-banker and pro-business than the right is one reason that the center-left in the U.S. and Europe is incapable of rising to the challenge of the economic crisis. Having mortgaged their parties to donors in Wall Street and the City of London, the Democratic and Labour Parties cannot engage in more than token reform of the bloated and dangerous financial sector without biting the hands that feed them.

Another factor is the evolution of the right. In Europe, as in the U.S., the native working classes that Clinton and Blair abandoned are being cultivated by parties of the right. The success of far-right populist parties in the European parliamentary elections and in some countries like Hungary has forced mainstream conservative policies to shift rightward on restricting the mass immigration that working-class voters find threatening to national identity as well as jobs and neighborhoods. Anti-immigrant sentiment is much stronger in Europe than it is in the U.S. because of anxieties about Muslim immigration. In a few decades, North Africans alone might outnumber Europeans.

Human beings cannot commit suicide twice, but political movements can. At the same time that former parties of the left in Europe and the U.S. were abandoning social democratic statism for celebrations of free-market globalization, progressivism was redefined on both sides of the Atlantic to mean celebration of immigration-increased diversity and the stigmatization of national patriotism as such, and not merely its perverted forms, as racist and fascist. Inasmuch as social democracy in Europe and New Deal liberalism in the U.S. were inherently left-nationalist projects, progressive anti-nationalism marked the final rejection of the mid-century center-left by the progressive champions of the global market of the 1990s and 2000s. But there was a certain logic to the neoliberal position, which is increasingly difficult to distinguish from pure libertarianism: If finance should be deregulated, and trade deregulated, why not deregulate the flow of labor across borders as well? If people are mere factors of production, not members of a cultural nation or citizens of a republic, then patriotism is pointless.

The right has not hesitated to pick up national flags that post-national progressives have tossed aside. In Italy, Silvio Berlusconi's party is "Sforza Italia" -- "Go, Italy!" The new generation of Germans, for whom World War II is history, is increasingly confident in appealing to national interest, as are young Japanese. In China, nationalism has replaced Marxism as the legitimating principle of the authoritarian regime.

Law enforcement is another theme that benefits the right. In Britain, Cameron played on concerns about social decline, emulating Richard Nixon's appeal to the "silent majority" when high crime rates and dread of black militancy helped create Republican presidential hegemony in the U.S. for a generation. Prolonged economic stagnation may lead to a higher crime rate, to the benefit of tough-on-crime conservatives.

If history is any guide, an era of global economic stagnation will help the nationalist and populist right, at the expense of the neoliberal and cosmopolitan/multicultural left. During the Long Depression of the late 19th century, which some historians claim lasted from 1873 to 1896, the nations of the West adopted protectionist measures to promote their industries. Beginning with Bismarck’s Germany, many countries also adopted social reforms like government pensions and health insurance. These reforms were often favored by the nationalist right, as a way of luring the working class away from the temptations of Marxism and left-liberalism. By and large the strategy worked. When World War I broke out, the working classes and farmers in most countries rallied enthusiastically around their respective flags.

The Great Depression of the 1930s similarly led to the rise of one or another version of the authoritarian, nationalist right in Europe. Only in a few societies with deeply established liberal traditions, like the English-speaking countries and Scandinavia, did liberals or liberal conservatives hold on. And Franklin Delano Roosevelt’s New Deal Democratic Party, a coalition that included racist Southerners and traditionalist Catholic immigrants, was not particularly liberal by today’s standards.

In both eras of depression, great-power rivalry for resources and markets intensified and ultimately led to a world war. Following World War II, the U.S. sought to avert a repetition of that pattern, by creating a global market secured by a global great-power concert in the form of the Security Council. But the project of economic disarmament and security cooperation broke down almost immediately after 1945 and the split between the Soviets and the Anglo-Americans produced the Cold War. The second attempt at a global market that began after the Cold War may be breaking down now, as the most important economic powers pursue their conflicting national interests.

A functioning global market system can work only if its members abandon mercantilism -- the policy of trying to enjoy perpetual trade surpluses, by fair means or foul. However, the nations with the three largest economies after the U.S. -- China, Japan and Germany -- all want to enjoy never-ending merchandise trade surpluses. All three have used "currency mercantilism" to help their export industries, to the detriment of the global economic system. China and Japan, by different methods, have deliberately undervalued their currencies, to help their exports and keep imports out of their markets. Germany accomplished something similar, by persuading its trade partners to give up independent currencies that they were able to revalue for the crippling straitjacket of the euro.

The system worked only as long as Americans borrowed to pay for imports from Japan and China, while southern Europeans borrowed to pay for imports from Germany. But the consumers are tapped out and neither Americans nor southern Europeans are in a mood for austerity measures in the middle of a near-depression. Unless the Chinese, Japanese and Germans turn into credit-happy consumer societies the global economy may be in for prolonged stagnation. Instead of changing their ways, however, the surplus countries are denouncing their own customers for their profligacy in buying their goods and insisting that the same customers be penalized by austerity programs. This will not end happily.

As the oversold promise of free-market globalization fades, countries large and small may turn increasingly toward state capitalism. At home, this would mean permanent state support of troubled industries like banking and the automobile industries, which all of the major industrial countries have bailed out. In trade, this would mean a retreat from global trade areas toward regional blocs and bilateral deals. Examples include agreements between energy-hungry governments like those of China and Japan and the state-owned oil or natural gas companies of Saudi Arabia and Russia. In a world of diplomatic rivalries among great powers to win contracts with state-owned corporations, the distinctions between geoeconomics and geopolitics would erode, with potentially dangerous consequences. Direct war between great powers seems unlikely, but if the Cold War was World War III, then a cold World War IV resembling Orwell’s shifting coalitions of Eurasia, Eastasia and Oceania in 1984 is all too easy to imagine.

These trends are clear but the transatlantic establishment refuses to confront them. Instead, elites on both sides of the Atlantic hope that the great recession will turn out to have been merely a particularly nasty business cycle downturn. They pray that soon we can return to something like the illusory prosperity of the late 1990s and 2000s without having to engage in any radical rethinking or reform. Our political and opinion leaders think they are leading us back home. They haven’t noticed, or refuse to admit, that what used to be home is now a large, smoking crater.

Michael Lind is policy director of the Economic Growth Program at the New America Foundation and author of "The American Way of Strategy."