In search of the Gulf oil spill smoking gun 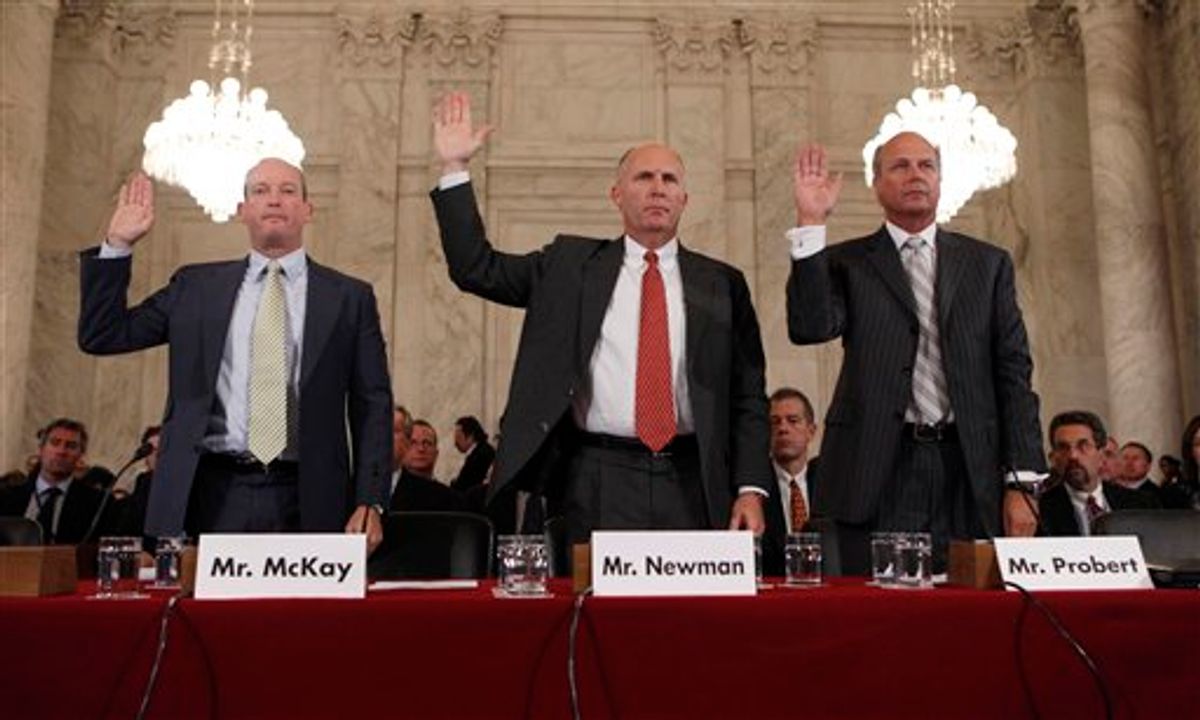 Generally speaking, Senate hearings do not work well as exercises in fact-finding. The ostensible goal in calling executives from BP, the oil services company Halliburton and the rig operator Transocean before the Senate Energy and Natural Resources Committee on Tuesday was to find out what caused the Deepwater Horizon oil spill. Was it a technical malfunction? A failure of regulation? An operational mistake by one of the three companies involved?

But the real reason, as always, was to give senators an opportunity to preen for the cameras and look tough against everyone's favorite villain-du-jour: the offshore oil industry. You don't get answers from these exercises, you get grandstanding and comical exchanges in which senators pretend to be knowledgeable about the technological intricacies involved with "blowout preventers" -- the emergency shut-off valves that are supposed to stop spills by crunching through the drilling tube and capping the well. And you get very, very cautious answers from men who are desperate to avoid the responsibility for paying the cleanup bill.

BP's position is that something went wrong with the blowout preventer installed at Deepwater Horizon. Perhaps it jammed against a tube-joint that it couldn't cut though, or there was something inside the tube that blocked it, like a piece of cement or other obstruction. But all the focus on the blowout preventer is a distraction from figuring out what went wrong with the well in the first place. Why was gas able to surge up from the well onto the platform, where it ignited into a fireball?

To my ears, the most interesting moment in the hearing occurred with respect to this exact point, courtesy of some questioning by Sen. Jeff Sessions, R.-Ala.

Sessions does not always come off as the brightest bulb in the Senate, but he zeroed in on some details brought to light in the prepared testimony provided by the executives along with reporting in the Wall Street Journal on Tuesday that suggested that there may be a smoking gun in the great Gulf Oil Spill. Shortly before the explosion that ended up sinking the Deepwater Horizon rig, a critical series of events took place.

[Halliburton's prepared testimony] describes a failure to place a cement plug within the well. The plug is designed to prevent gas from escaping up the pipe to the surface.

Before such a plug is placed, the job of keeping underground gas from coming up the pipe is done by heavy drilling fluid inside the well, commonly known as "mud." The plug is normally put in before the mud is removed, but according to the account of Halliburton, Transocean and the two workers, in this case, that wasn't done -- drilling mud was removed before a final cement plug was placed in the well.

The Journal quotes Lloyd Heinze, chairman of the petroleum engineering department at Texas Tech University, as agreeing that reversing the normal order "is an unusual approach." Waving the Wall Street Journal article in front of him, Sessions grilled the assembled executives. Why was the mud removed before the final plug was in place?

Suddenly, all three men became very, very careful. Lamar McKay, president of BP America, denied any specific knowledge of what had happened on the rig right before the explosion -- "I don't have information regarding the procedure at the well." Steven Newman, president and CEO of Transocean, said that his company only had data reaching up to 3 p.m. on the day of the explosion, and also declined knowledge of any specifics. But he was excruciatingly fastidious in noting that if a decision had been made to reverse the normal sequence of events, the order could only have come from BP -- specifically, he said, enunciating with the care of someone who has recently received expensive legal advice, "the obligation for that decision" lay with BP. Halliburton's Tim Probert reiterated Newman's point about the chain of operational command, but refused to be pinned down on whether changing the order qualified as "unusual."

A worker who was on the drilling rig said in an interview that Halliburton was getting ready to set a final cement plug at 8,000 feet below the rig when workers received other instructions. "Usually we set the cement plug at that point and let it set for six hours, then displace the well," said the worker, meaning take out the mud.

According to this worker, BP asked permission from the federal Minerals Management Service to displace the mud before the final plugging operation had begun. The mud in the well weighed 14.3 pounds per gallon; it was displaced by seawater that weighed nearly 50 percent less. Like BP, the MMS declined to comment on this account.

As the heavy mud was taken out and replaced with much lighter seawater, "that's when the well came at us, basically," said the worker, who was involved in the cementing process.

Neither the MMS nor BP would comment? Their silence raises a host of questions. Suppose BP did order Transocean to displace the mud before Halliburton set the final plug in place. What would be the reason for that? And why wasn't a current MMS official testifying before the Senate committee, to explain exactly what the role of the regulator had been on the day in question?

Sen. Lisa Murkowski, R-Alaska, emphasized to the panelists the importance of figuring out what exactly had happened because "we are all in this together." But nothing could be further from the truth. A lot of people made mistakes at Deepwater Horizon, including both regulators and rig operators, but someone in particular may have made a very bad mistake -- the kind that gets courts to assign liability. Transocean and Halliburton don't want to be left holding the hot potato.

Meanwhile, while disavowing any direct knowledge of operational details on Deepwater Horizon, BP's McKay kept trying to gloss over what had happened by stressing the unprecedented nature of the entire disaster: "We've not dealt with a situation like this before," he kept repeating.

That's not an argument that is likely to hold up well in court, where there will be a little less senatorial grandstanding, and a lot more follow-up on the exact sequence of events that took place on April 20 in the Gulf of Mexico.