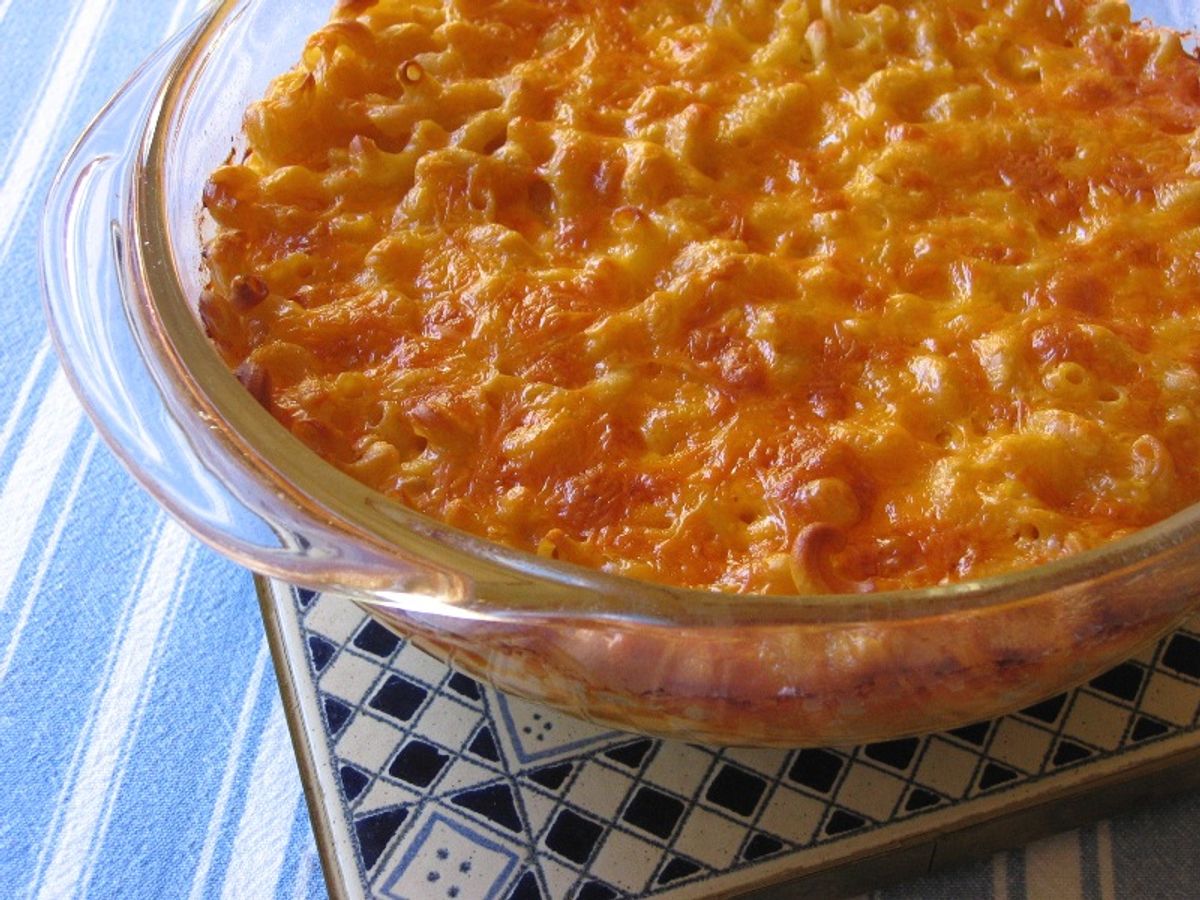 This winning entry for the Salon Kitchen Challenge -- in which we asked readers to share their favorite recipes from their mothers -- comes to us courtesy of Trish Rainbow. Check out this week's Challenge here. We haven't had a chance to try this recipe out yet, but we'd love to hear about it if you do!

My mother made macaroni and cheese (never mac–n-cheese) in winter, and with the coming of Easter, put it away like white shoes after Labor Day. It felt like a venial sin in disguise every Friday during Lent.

Like most comfort food, it needed only a few ingredients, but one was crucial. If you don't get the cheese right, you're wasting your time. (A lesson I learned over the years.) It had to be Herkimer, an upstate New York cheddar with a thick black rind. The corner grocer sold it and only one other cheese: white American. He either cut a wedge of Herkimer from a wheel or a square of American from a block, both measured by the inch. Macaroni and cheese meant Herkimer. She rough-grated the cheese while the macaroni boiled to "al denti," a term she used after she read an article at the beauty shop. She used a dedicated Pyrex dish -- clouded through with age and dimly tanned, bearing a signature that circled the glass, where the crust was and where we'd scraped after it. Five ingredients took their turn into the dish, three layers in all. If my mother felt fancy, she sprinkled bread crumbs on the top.

It took forever in the oven. I found that out only after I left home. Even now, I start checking after an hour, when the milk is still milk, but I sneak a big spoonful out anyway. Then every 10 minutes, I check again until there's no sign of the milk and the crispy top has been pretty much mutilated. In my mother's kitchen, the oven was never opened until the buzzer went off. In her oven, the macaroni and cheese was allowed to seal itself.

On macaroni and cheese nights, my mother didn't serve anything else -- no salad, no vegetables, no bread and butter, no dessert. I've always loved her for that. It was the only solo dish she ever made, which also meant it was for family only. We always wanted more than the dish could hold; we wanted a loaves-and-fishes dish. When I look at her Pyrex dish in my cabinet, I can't believe it held enough for six people. Ever since my son got old enough to leave and then come back home, he has asked for macaroni and cheese, and the old dish, his alone, sits next to a newer one on the oven rack.

We kids piled into the house 10 minutes before the buzzer went off, about all we could take of that homey smell moving through each room. It was the smell of TGIF and no nuns until Sunday Mass; it was the way the steam on the kitchen windows hinted of melted cheese; it was the aroma of home in winter. One of us girls would quickly set the table while the rest of us sat down. Then my father took his place and we waited for the casserole to make its entrance. My mother placed it on the hot pad next to her plate, warning us, "Be careful, it's very hot." Like we'd ever be allowed near it. We barely got through grace.

The first break of the bumpy crust was like grace itself. Her serving spoon came up with noodles loosely held together and inundated with curds of cheese and tiny puddles of butter. The macaroni seemed to relax and spread out a little when it settled on the plate. It was hard to wait until all of us were served before we could pick up our forks. My father's plate was first, and I, being the youngest, was always next in line. It had to have time to cool so I wouldn't burn my mouth; I guess she thought the older three kids would remember to blow.

The kids slowed down as the plate began to show itself again. Each of us had our own way to prolong the inevitable. Mine was to push single noodles out to the plate's curling ridge that rose up to the food-free orbit of respectable dining. I'd pierce one macaroni and place it on my tongue to sit there a moment before I nibbled it into something barely worth swallowing, an eating meditation Thich Nhat Hanh would be proud of. At the end, some melted butter and pepper stayed behind, but then again, maybe they were butter lakes with contented pepper dots taking a swim or relaxing on nearby china beaches, glad that someone had finally done something about those white noodle whales they'd had to put up with.

But an empty plate was an empty plate. There was nothing we could do but wait for the next Friday and hope it wasn't the Good one. When that holy day came, we awaited Easter and adapted our appetites to chocolate bunnies and jelly beans, knowing it would be a while before my father's summer tomatoes took their turn on our plates and in our memories.