The president disses Apple's latest gadget. Has he forgotten how he won the White House? 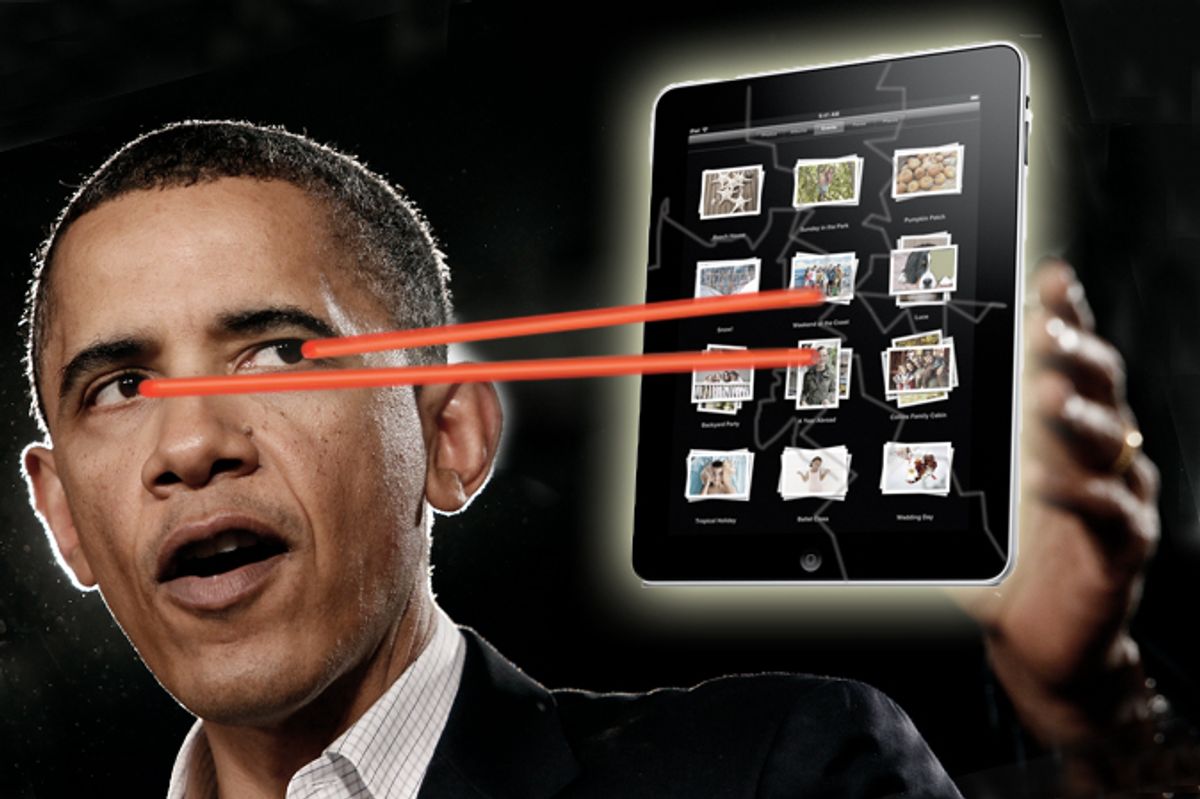 Distracted by a cascading sovereign debt crisis in Europe on Monday and the testimony of oil industry executives in Washington on Tuesday, I completely missed Sunday's big news -- President Obama's preemptive attack on the iPad in a commencement speech at the historically black Hampton College on Sunday.

Meanwhile, you're coming of age in a 24/7 media environment that bombards us with all kinds of content and exposes us to all kinds of arguments, some of which don't rank all that high on the truth meter. With iPods and iPads; Xboxes and PlayStations; information becomes a distraction, a diversion, a form of entertainment, rather than a tool of empowerment. All of this is not only putting new pressures on you; it is putting new pressures on our country and on our democracy.

Oh dear. Now even the geeks are all riled up at Obama, Tea Party-style. As any technology journalist learns early, one speaks ill of Apple products only at great peril. Few people seemed to mind, as Matthew Yglesias sagely observes, when Obama told predominantly black audiences during the presidential campaign "to turn off the TV and put down the Gameboy." But throwing the iPad into the mix: "-- the hot yuppie gadget du jour and not something people associate with "irresponsible" minority youth ... is scrambling the intended message and causing it to be heard in a different light. "

Cue the tar-and-feathers and accusations of hypocrisy. The Christian Science Monitor observes that Obama once gave the queen of England an iPod, and told Rolling Stone reporters what songs were on his own MP3 player. MacDailyNews reminds us that the Obama campaign placed advertisements in 18 different Xbox games! And what about all those reports about how hard it would be for the senator to give up his BlackBerry addiction after becoming president? I guess social media and the Internet are all fine and dandy when they're helping you win the White House, but once you start seeing how easy it is to spread viral Birther e-mails, you start singing a different tune.

But that's hardly the most embarrassing aspect to this sordid display of Apple hate. The most cutting blow comes from Dr. Keith Ablow, "a psychiatry correspondent for Fox News Channel." Obama is absolutely correct in his assessment of the iPad and other gadgets, writes Ablow. His own election to the presidency is proof of his thesis!

The president is doubly correct. First of all, he is right (as I have written a number of times) that the Internet, Facebook and, yes, the new iPad and many other devices can interfere with people becoming wise and knowledgeable, rather than simply deluged with facts. They can also become estranged from real relationships and from themselves as they become obsessed with pretending to be stars on YouTube or worthy of "followers" on Twitter or popular with thousands of "friends" on Facebook.

Second, Obama is correct because his own ascension to power is a product of those very forces. He used celebrity and star power and the anonymous, pervasive reach of the Web to win his election. He is the iPresident -- a product of the very forces that some part of him realizes are synthetic -- and without substance and highly addictive. He is, as an early McCain television advertisement suggested, first and foremost, a celebrity in a celebrity-crazed country.

Ablow then pivots off his stunning psychiatric insights into Obama's character into an attack on healthcare reform, tax credits for new homeowners and Wall Street bailouts. Bet you never saw that coming. But I'm guessing that neither Ablow nor the enraged techies steaming at the iPad slight took the time to read or watch Obama's entire commencement address. Because first, it exposes as completely idiotic the right-wing fantasy that Obama is somehow not "substantive," and second, it puts into proper context his critique of some aspects of the modern information age.

We meet here today, as graduating classes have met for generations, not far from where it all began, near that old oak tree off Emancipation Drive. I know my University 101. There, beneath its branches, by what was then a Union garrison, about twenty students gathered on September 17, 1861. Taught by a free citizen, in defiance of Virginia law, the students were escaped slaves from nearby plantations, who had fled to the fort seeking asylum.

After the war's end, a retired Union general sought to enshrine that legacy of learning. With collections from church groups, Civil War veterans, and a choir that toured Europe, Hampton Normal and Agricultural Institute was founded here, by the Chesapeake -- a home by the sea.

That story is no doubt familiar to many of you. But it is worth reflecting on why it happened; why so many people went to such trouble to found Hampton and all our Historically Black Colleges and Universities. The founders of these institutions knew, of course, that inequality would persist long into the future. They recognized that barriers in our laws, and in our hearts, wouldn't vanish overnight.

But they also recognized a larger truth; a distinctly American truth. They recognized that with the right education, those barriers might be overcome and our God-given potential might be fulfilled. They recognized, as Frederick Douglass once put it, that "education... means emancipation." They recognized that education is how America and its people might fulfill our promise. That recognition, that truth-- that an education can fortify us to rise above any barriers, to meet any tests -- is reflected, again and again, throughout our history.

There is a difference between getting an education and watching the latest viral YouTube clip on your iPad, between establishing a college for the education of freed slaves and rallying 10,000 fans to a Facebook page. And there's no contradiction between employing any technological means necessary to organize a successful presidential campaign and recognizing that there may be aspects of that technology worth criticizing. To any readers of this post who might be consuming it via iPad, I invite you to push that contradiction to the limit: Watch, and learn: