"American Idol" recap: Down to the final four

Jamie Foxx gets in contestants' faces, Lee goes for a karaoke vibe, and Big Mike even makes Michael Jackson boring 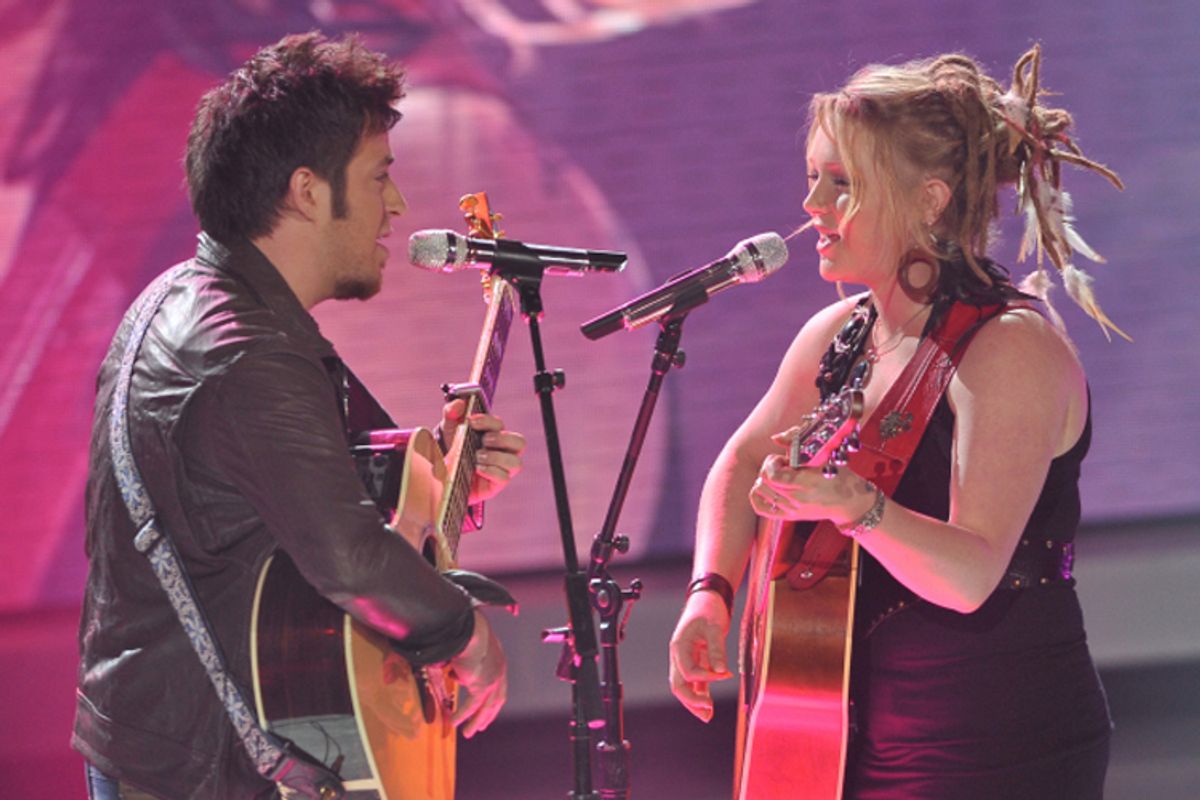 It is more than clear that Season 9 of "American Idol" is going to end with a whimper and not a bang, despite the fact that this is Simon’s last season with "American Idol". Even Simon’s demeanor this season has been one of seeming apathy, a shrug of the shoulder and an implied, "So what?"

Last Tuesday night’s ratings were the lowest since 2003 and the show was beat out by the cringeable "Dancing With The Stars."You know a show is in trouble when it is beat out by the likes of Niecy and Erin Andrews (the woman who needs to stick to sports casting).

Baby Aaron Kelly was sent packing, blankie and all. He should return in a couple of years after he’s reached puberty. He had some potential.

Jamie Foxx was the mentor. He was full of life, passion, energy and a lot of t-shirts. The whole t-shirt angle with one saying "Artist" and the other "Contestant" felt cheesy and quickly became an irritating distraction.

Tuesday night’s show theme was "movie" songs. This meant that the contestants had a huge number of songs to pick from. I lost my senses and got momentarily excited. I love movie songs and surely these Final Four had finally figured out how to pick a song.

The evening started off with Lee Dewyze: Foxx sensed Lee’s discomfort with eye-to-eye contact so he got right in Lee’s face, literally. Foxx went from music mentor to motivational speaker. "He has to do something to take it from being in here (pointing to his heart) to out here. He needs to get in touch with that confidence." Nice try Jamie. He wasn’t saying anything that Lee hadn’t heard a million times before from the judges.

Lee sang "Kiss from a Rose" featured in the "Batman Forever" film soundtrack. I now know where the phrase "taking the bloom off the rose" came from. Lee was pitchy, out of tune, off key and any other way you can say "ouch." Foxx’s speech went to waste and he should have stormed onto the stage and taken his t-shirt back.

Randy: "Who is in this to really take this? What is the deal? For me you did nothing with that song. It was okay. It was pitchy in spots."

Simon: "I’m with Randy and I’ll tell you what. It was verging on karaoke. If you’re choosing the t-shirt, it’s going to be a 'Contestant' I’m afraid."

Lee felt good about the way he sang the song. Lee didn’t give a rip about the judges feedback or the lousy t-shirt.

Michael Lynch was next and he was singing "Will You Be There" written and performed by the late great Michael Jackson and featured in the film “Free Willy”. Foxx made an emotional connection with Big Mike and gave him the "Artist" t-shirt. Whatever.

Big Mike should be known as "Big Boring Mike" with a t-shirt to match. Yes I said it. Someone had to say it. Big Mike sang it well, it had the gospel feel that was present in Michael Jackson’s version, but it was just so predictable and stilted. Big Mike simply couldn’t seem to dance or move.

Randy: "Listen man. Yo yo yo you. I don’t know what’s going on tonight. It’s got this whole gospel influence thing. You’re an R&B song. It was just alright. It didn’t really take off." Hey, it didn’t even make it to the runway.

Kara: "What you did tonight you could do in your sleep." I was asleep.

Simon: "I have no idea what Free Willy is." Kara explained it was a movie about a whale. Randy and Ellen slept while Kara and Simon got caught up in what a willy is. Too bad Simon wasn’t hip and didn’t know that, according to the Urban Dictionary and every kid in third grade, a willy "is a term used in polite conversation instead of 'penis'."

Bring Aaron Kelly back. He was more mature than the judges.

Simon finally got around to critiquing Big Mike, "You gave it 100%. I kind of felt like you meant it." I wanted to see Simon give some 100% solid feedback.

Duet time: Crystal Bowersox and Lee Dewyze started first with "Falling Slowly" from the movie "Once." It was a solid performance by both. Crystal and Lee had their guitars and I felt like I was at a folk festival. Given the dismal performances of the first two, their duet came off as a masterpiece for the judges and apparently the majority of the American public. This may sound blasphemous but I don’t care. For me, the song was okay.

Kara: "One of my favorite moments of the entire season. You both felt like artists. The interaction, the chemistry, the support, you brought out the best in both of you."

Next up was Casey James. Foxx tried to tell Casey he wasn’t focused. "Seduce me, act like I’m a woman." Casey looked nervous. I don’t know what t-shirt Casey got and I don’t care.

Casey sang "Mrs. Robinson" and it was a slap in the face to all cougars and MILFS in this country, including Kara. Casey was playing some kind of ukulele or mini-me guitar. He sounded more folksy than foxy and it was another disappointing song performance from him.

Ellen: "I wish they had given you a big boy guitar." Hey, Ellen said something actually funny! "You got beat up last week and you did something different with the song. I liked it and I’ll turn it over to Mrs. Robinson." Ellen just regressed back to middle school.

Kara AKA Mrs. Robinson: "This is you fighting to stay in the competition. You showed a vulnerable attachment to the song and you like to jam bam so for me, this was a good choice." Uh, do I need to say more?

Simon: "Personally, I didn’t think the song or the performance had the substance required on this important night for you. It was a little bit lazy and I think you could have made more of an impact. Strange song choices tonight. And that was one of them."

Crystal sang "I’m Alright" by Kenny Loggins and theme to the movie "Caddyshack." Crystal was star struck by Jamie Foxx who was exhorting her, "Raise those pretty blue eyes and let them see that you are alright. It’s a testimony."

Crystal was back in her true crystal form. She had her guitar and her dreadlocks and she sang the song well. It wasn’t spectacular but it was good.

Ellen: "That performance just got crystallized and you took that song and made it better."

Kara: "I agree with Ellen. You made it better. Artist! Artist!" Simmer down there Kara.

Simon: "I would say that after your performance, you, Crystal, are back in the game." Since when was Crystal ever out of the game? Simon was getting desperate and trying to invent imaginary suspense. Not even the texting tweens are that naïve.

Big Mike and Casey were last and least with their duet "Have You Ever Really Loved A Woman" featured in "Don Juan Demarco."

It didn’t seem like a duet as much as Casey and Big Mike taking turns singing. They had their guitars and the whole evening was beginning to feel like a giant 70s folk fest. I was in no mood for time travel. It was boring. That song needed to be sensual, passionate, and sexy. The boys ruined the mood, especially towards the end of the song with a horribly high-pitched pitchy note.

Randy: "Big Mike was sultry and sexy. Nice one nice one." Randy should be called "Mr. Robinson." No objectivity dawg, no no.

Ellen: "Yes, as a matter of fact, I have loved a woman." Ellen! Slams it with another creative comment! No matter it had nothing to do with the song or feedback.

Kara: "The duets tonight were incredible. They were better than all of the solo performances." This wasn’t saying much. Again, I may be alone in saying this, but that Casey/Mike duet was a dud.

Simon: "I think we should give Jamie’s duet performances the 'Artist' t-shirts. That was good and well done." I say give the t-shirts to Goodwill and at least two of the contestants as well.

The good news: There are only two more weeks of American Idol.

The bad news: There are still two more weeks of American Idol.

Who will go home on Wednesday night? Since I’ve been correct 0% of the time, you might not want to listen to me, but this time I’m 98.6% sure: Big Mike will be babysitting within 48 hours.

Breaking news: Due to the kindness of a benevolent benefactor who has chosen to remain anonymous, I’ve got a ticket for the “American Idol Season Finale” on May 26th, live and in person in Los Angeles to witness the underwhelming announcement of the winner of this year’s “American Idol.” (I need a t-shirt that says “American Idol Sucker”.)

Despite my rantings and ravings about this disaster of a season, I am truly grateful to this wonderful person for working so hard to make sure I am able to go to the Season 9 Finale. I was also fortunate enough to go last year and despite the results or even the contestants themselves, there is always a long list of top name performers. And to be there for Simon’s last show? That’s just priceless.