Peter Beinart is worried that Elena Kagan hates the military 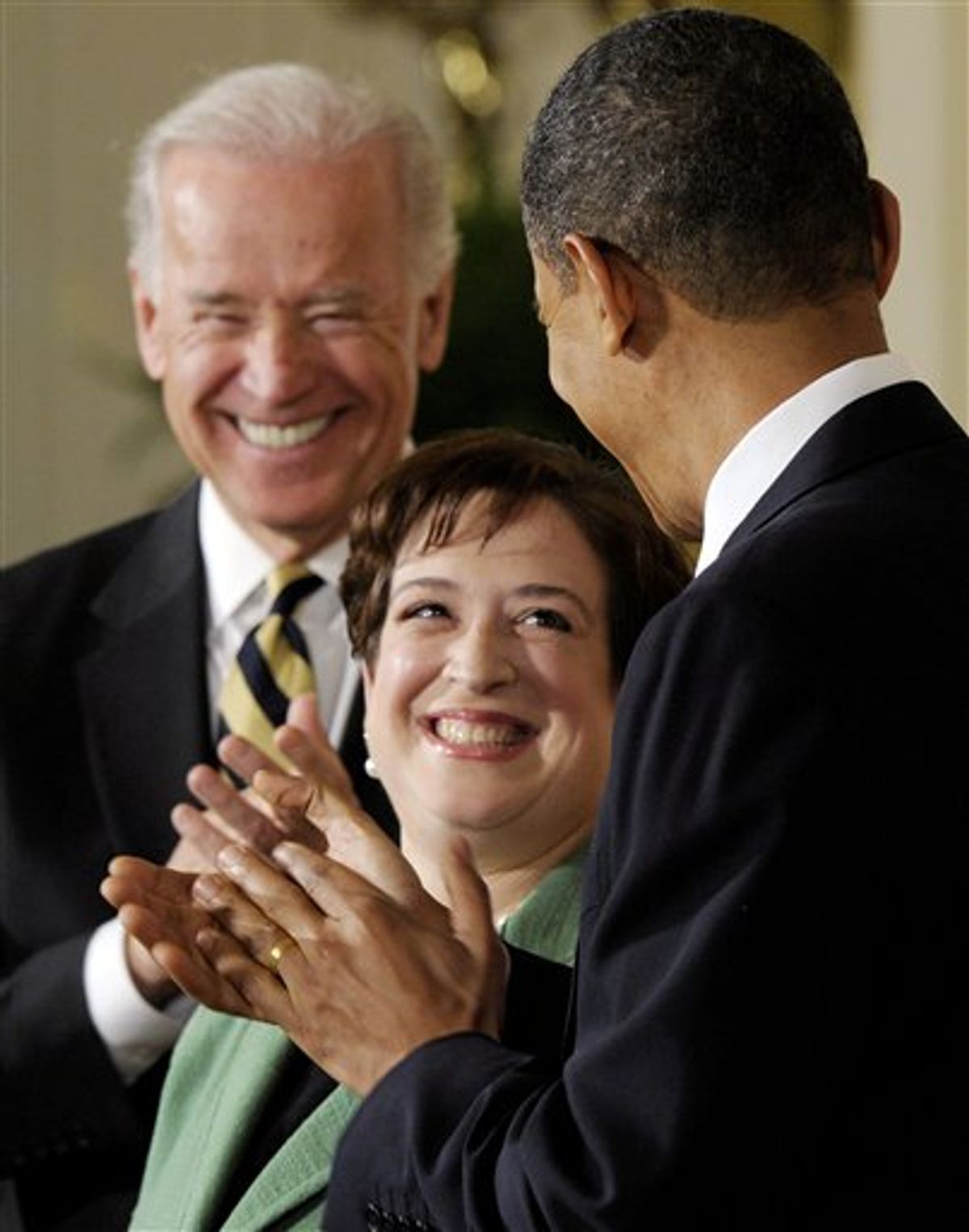 Solicitor General Elena Kagan is applauded by President Barack Obama and Vice President Joe Biden as she is introduced as Obama's nominee for the Supreme Court during an announcement in the East Room of the White House in Washington, Monday, May 10, 2010. (AP Photo/Susan Walsh) (AP)
--

There was a certain kind of liberalism very much in vogue six or seven years ago, whose defining characteristic was its anxiety. Remember the "liberal hawks," always talking tough on terror, and seeming incredibly self-conscious about it? The avatar of this idea, in politics, was Sen. Joe Lieberman, then-D-Conn., who as a presidential candidate was always promising, "I can match [George W. Bush] where he's perceived to be strong -- defense and values -- and beat him where he is weak -- the economy and his right-wing social agenda."

In the pundit class, though, there was no better representative of Lieberman-ish would-be machismo than Peter Beinart, then an editor at the New Republic. (TNR, in fact, endorsed Lieberman in the 2004 Democratic primaries, although he had already thoroughly embarrassed himself by that point. Honestly, who tries to suck up to the other party’s nominee while running in a primary campaign to oppose him? Madness.)

Beinart made his claim as leader of the liberal hawks with a much-talked about essay that ran in TNR after the re-election of President Bush, entitled "A Fighting Faith," which he subsequently turned into a book, "The Good Fight." (Notice anything?) The argument was that, to succeed, Democrats had to remember their predecessors in the early days of the Cold War. Back then, a group of center-left liberals associated with Americans for Democratic Action had consciously decided to purge their party of left-wing radicals and communist sympathizers. This group represented for Beinart the model of how liberalism might win at home and, ultimately, abroad. To succeed, he thought, Democrats had to rid themselves of their peacenik faction, and muscle onto the GOP’s national security turf.

There are a number of appalling aspects of "The Good Fight." What really gets me, though, is that Beinart calls for liberals to recreate precisely the circumstances that led the party into Vietnam. Ever-nervous about their right flank and Cold War politics, and full of implausible ambitions of taking the New Deal worldwide, it was Kennedy-Johnson Democrats from the "fighting faith" school who waded in to Vietnam and refused to admit their mistake until much too late. And then, thirty years later, Beinart came along and more or less said, "Well, that worked out."

Obviously, the "fighting faith" is not an idea that has aged especially well. Accordingly, most members of Beinart's tribe have gotten a comeuppance in one way or another. Lieberman, of course, lost another primary race, and more or less bolted the party to become a half-fledged Republican. Legions of politicians, intellectuals and journalists who supported the war declared themselves mistaken, and apologized. An Iraq war opponent was even elected president, negating Beinart's central thesis. And to be fair, Beinart backed off, himself. He's even gone so far as to follow up on "The Good Fight" with another book about the dangers of American hubris, which I haven't read, but apparently is meant explicitly as atonement for his mistakes of the last decade.

Still, the guy just can't learn a lesson. At his new gig at the Daily Beast, Beinart has, in the process of endorsing Elena Kagan's confirmation to the Supreme Court, found a way to get scared of the influence of hawkish right-wingers and endorse their coming attack on her as anti-military.

As you may have heard, Kagan banned the military from recruiting on the campus of Harvard Law School while dean, as a way of registering protest against the armed forces' anti-gay discrimination. Wrote Beinart, "Barring the military from campus is a bit like barring the president or even the flag. It’s more than a statement of criticism; it’s a statement of national estrangement. I doubt that’s how Kagan or her fellow administrators meant it. But it is certainly the way it has been received."

So, first of all, even as he was making the criticism, Beinart was hedging that maybe it just looks bad to conservatives -- but hey, that's terrible enough.

Besides, as it turns out, the charge isn't true at all. She didn't ban the military. What Harvard Law did was to uphold its policy against helping discriminatory organizations recruit on campus through the career office, and not make an exception for the military. As Think Progress notes, recruitment itself was ongoing, just without official, direct help from the administration.

After Beinart’s first column ran in the Daily Beast on this point, someone alerted him to reality. This would be the point to back down gracefully, but Beinart didn't give an inch. (He's nothing if not a fighter, right?) Even though Beinart himself says "don’t ask, don’t tell" is "immoral," he still thinks it's wrong to question the military's moral legitimacy. "Seeing the military as just another employer strikes me as bizarre. The military, like Congress, the courts and the presidency, is one of our defining public institutions. To question its moral legitimacy is not like questioning the moral legitimacy of General Electric." So unless Harvard instructed its institutions to actively help the military perform immoral discrimination, it was implicitly behaving unpatriotically, says Beinart.

And then he's back to the weird public relations argument. "It's a statement of profound alienation from your country, and will be received by other Americans as such." I'm still not entirely sure if he really thinks the problem is that it is bad or just that it looks bad. Either way, though, Beinart's strangely willing to loot evidence from fantasy-land in order to build his case against America-hating liberals. It’s "A Fighting Faith" all over again.

You can't help but laugh when Beinart closes his first column on Kagan by wishing for President Obama to nominate someone else, because it would teach a lesson to the anti-military zealots of the left, and help heal the culture war. "If that requires conceding that conservatives are right about something, so be it. I'm sure it won't happen again anytime soon." That’s a pretty preposterous and feeble gesture for Beinart to make -- acting like the liberal warrior offering the rare concession to the right. Conceding to the right has been his whole career strategy.

Obviously, there's a paycheck and a certain amount of influence and psychic satisfaction to be had in being the liberal who bends over backward to attack other liberals. But Beinart has real intellectual aspirations. So why can't he learn a damn thing? And what is he so afraid of on the right? Has he seen the right wing lately?

Unlike Beinart, I've got little interest in declaring people excommunicated from the true church of liberalism. But honestly, that defensive crouch must be exhausting to maintain all the time. Listen, man -- cut us a break, and cut yourself one too.