Catching up with George McGovern

The former senator talks about Obama, Afghanistan, his relationship with the Clintons, and his favorite movie 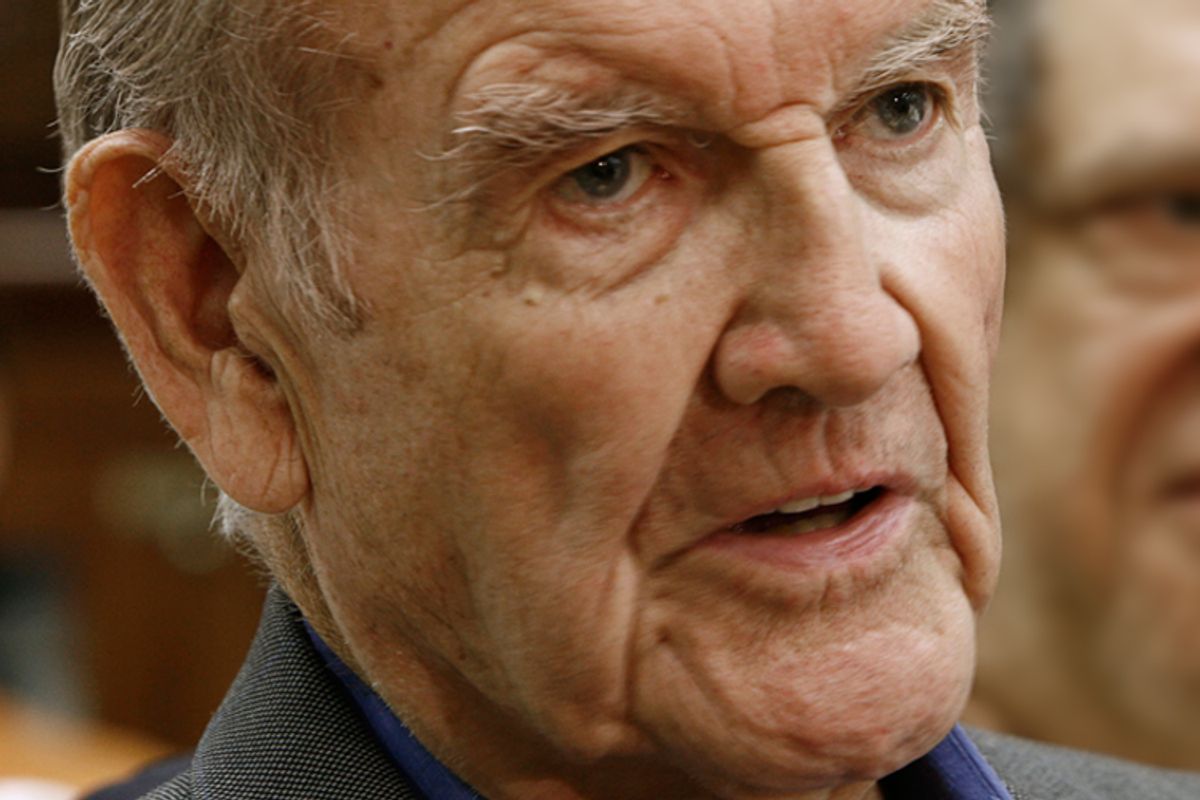 George McGovern made a name for himself in the 1960s as one of the earliest opponents of the Vietnam War, and in 1972 ran against Richard Nixon on an anti-war platform – a campaign that ended in a 49-state defeat.

After South Dakotans voted him out of the Senate in the 1980 Reagan landslide, McGovern launched a second presidential run in 1984 (and mulled a third in 1992), authored a number of books on a wide range of topics, and dedicated himself to the cause of ending world hunger. Now 87, the South Dakota native today resides in St. Augustine, Florida, where he's begun working on a new book, "George McGovern: A memoir."

Salon spoke with McGovern over the phone about what he's doing now, how Republicans in Washington have changed and Obama's policy in Afghanistan.

What have you been up to for the last few years?

Well, I'm starting to write my memoirs and I'm finding it very enjoyable. I've decided after working on it for several months, that I'm not all bad.

Is there a typical day for you right now?

I get in the morning, read the New York Times. I have it delivered here to my house everyday. Then, I have to eat breakfast and sometimes I'll take my big Newfoundland dog out for a walk on the beach here at St. Augustine. I've got a big Newfoundland dog that gives me a lot of pleasure, so we take a little walk on the beach. Then I'll come back and maybe work on my writing for two or three hours. Ordinarily, I'll have a late lunch and then I may do some reading in the afternoon and some more writing. I go out quite a bit in the evening, usually to some nice restaurant with a neighbor or a friend.

Republicans have been complaining that Washington used to be more about compromise. When you were in office, were Republicans more cooperative?

They were more cooperative in the years when I was in the Senate. I used to team up with Bob Dole on matters that related to agriculture or to food or nutrition, school lunches, food stamps. He and I worked hand in glove on those matters and that was not uncommon. Senator [Mike] Mansfield [D-Mont.] and Senator [George] Aiken of Vermont, a leading Republican, used to have breakfast together every morning.

Those kinds of things aren't happening much anymore. I think it's too bad. The Republicans seem to have adopted a strategy to just oppose everything that the president proposes on the theory that it will make him look bad and easier to defeat next time around. But when they tried that with Harry Truman, he took his case to the country and pulled an upset and he got reelected. So, it's kind of a dangerous strategy, even from the standpoint of the Republicans, and it's certainly not good for the country.

Why do you think things have changed so much?

I think it's partly the hunger of people to get re-elected or get elected at any cost. I don't know what has fed that. I suppose politicians have always wanted to get re-elected, but there's a kind of a feeling now that if you just discredit your opposition, it makes it easier for you to win. I don't think that's necessarily true. I think the country's getting disgusted with Washington partly because of the decline of civility in government.

I think both parties are partly to blame for the crisis in government right now, but much more so the Republicans. At least the Democrats are trying to get things done for the good of the country. The Republicans don't seem to have a program except to knock down everything that's proposed on the Democratic side.

Looking back to the 2008 election, you initially supported Hillary Clinton but later switched your endorsement to Barack Obama. What's your relationship with the Clintons like now?

It's fine. I've been to dinner with the two Clintons. I think Hillary's doing a great job as secretary of state and I think she would have been a good president if elected. But it just seemed to me, as the campaign went on, that Barack was more in tune with the country. He seemed to be the man of the hour. So, I switched and moved my endorsement to him. I didn't do that until the mathematics showed that Hillary had no chance of winning the nomination. It was not an easy decision either because she's very talented, intelligent, strong woman. But I quickly got in touch with her after the election and I attended one of their social functions and had a little chat and things are fine.

Does President Obama every call you up for advice?

No, but I think he's got lots of advice. He hasn't called for advice. He knows what I think. He knows I'm opposed to his policy in Afghanistan. We never should have sent more troops into that impossible situation. The problems are not essentially military problems and they won't be resolved by military means, but I put that in the press. He knows where I stand. I'm sure he does, but he hasn't called me and I haven't really expected him to.

"Crazy Heart." It was just great. I think it's superb. I'm a movie buff.

What's one thing you wish more people knew about you?

I wish people nationwide knew that never in my life have I advocated a course in public that I didn't believe in in private. I think a lot of people know that about me. I think that's how I won the presidential nomination many years ago, but it's something that gives me great satisfaction and I just wish every American knew that. That doesn't mean I'm always right, it just means I always say what I think is right. And I refuse to advocate a course that I think is wrong, even though it might be popular.