On "Larry King," the former first lady expresses support for gay marriage and abortion. I always did like her best 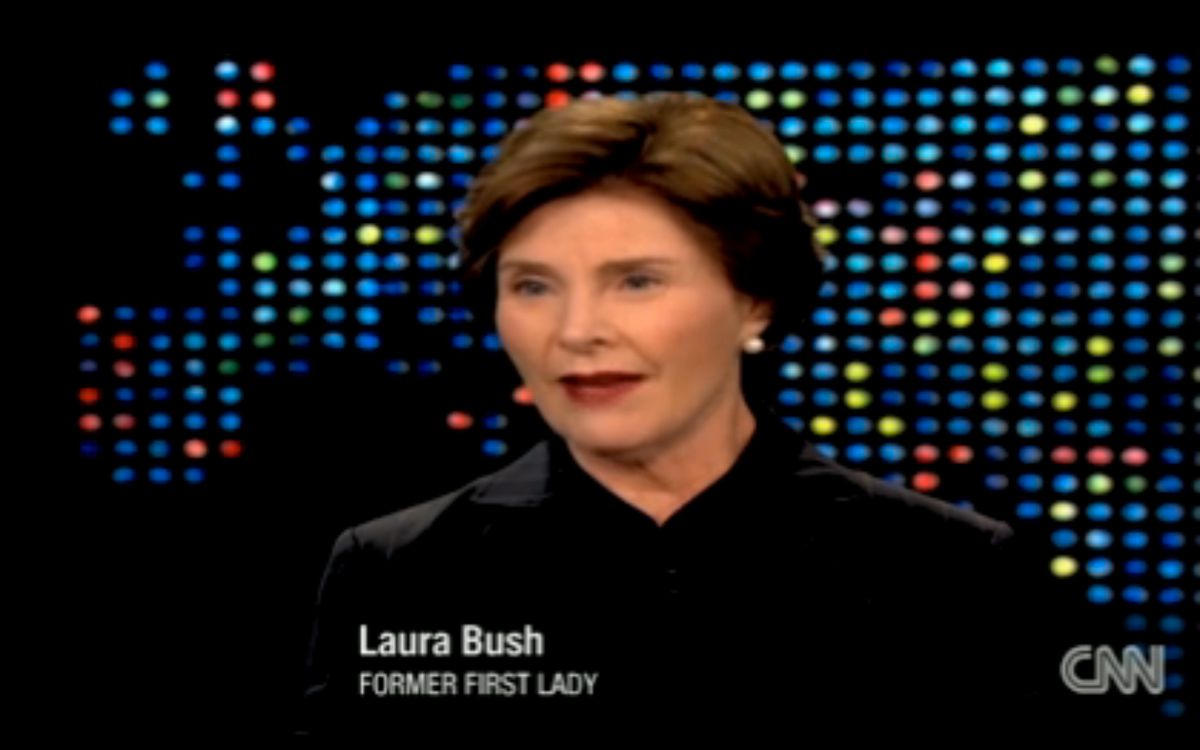 I don't know how I wound up with a curiosity about Laura Bush, a figure I would otherwise not have spent much time considering. Maybe it was when I saw Tony Kushner's 2003 play "Only We Who Guard the Mystery Shall Be Unhappy," in which the "Angels in America" playwright depicted the Dostoevski-loving former first lady reading to a group of dead Iraqi children, an angel telling them, "Mrs. Bush is explaining why you are dead, and in addition to being married to the President of the United States she is also a smart lady, she was a librarian!"

Maybe I became intrigued after reading "American Wife," Curtis Sittenfeld's thinly veiled novel that imagines the life of a smart young woman from West Texas whose early path, marred by a tragic and deadly car accident, leads eventually to her marriage to an improbable president.

Maybe what has so beguiled me about Bush are the very  things that also drew Kushner and Sittenfeld to her as a character. Laura Bush inherited an East Wing that had been recently torn up and renovated by Hillary Clinton to better reflect a post-second-wave America in which women were not simply helpmates and hostesses but also had their own identities, priorities and projects.

In ways that we rarely consider, Laura Bush filled out her role in a post-Hillary, pre-Michelle Obama timeline. She was the second first lady in  history (though the second of three in a row) to hold a post-graduate degree, hers in library science. Single until the age of 30, Laura Welch went to college and graduate school and worked as a schoolteacher before she met and married George W. Bush, the black-sheep scion of the Texas Bush clan.

And while her marital decision is all most people need to know about Laura Bush, there were always  vague suspicions -- fueled by rumors that she smoked cigarettes on the sly, disagreed with her husband on policy and that she hated their eight-year stint in the White House, as well as by the obvious disparity between her husband's reputation as a nincompoop and her reputation as a literature-loving intellectual (at least by contemporary White House standards) -- that Laura Bush led the complicated life of someone who knew better than the person who was her more powerful partner.

But her supportive silence while her husband and his cronies drove the country into war and into debt, robbed its citizens of their civil liberties and compromised our reputation around the world left those who felt some sympathy for her in a quandary: A big brain and good taste in books don't get you far in the moral universe if you stand by while people die and nations flag.

All this meant that I couldn't look away from Laura's appearance on "Larry King Live" on Tuesday, in which she talked about her new memoir, "Spoken From the Heart," a book I have not yet read -- despite my curiosity about her -- mostly because I had it figured for a pasteurized fairy tale. Her candid conversation with King reignited my belief that there is something compelling, maddening and ultimately incomprehensible about Laura Bush.

She spoke to King about the car accident that took place two days after her 17th birthday, telling the host that Mike Douglas, the man in the car she killed on the way to a drive-in movie, was not her boyfriend but her "very good friend" whom she'd known since childhood and with whom she talked on the phone every night. I have read things people say about Laura Welch's role in this accident -- claims that she does not deserve sympathy because her carelessness took a life, that her rumored rebellious high school habits were to blame. But listening to her speak about the events as an adult, and not taking away from the damage she caused, it is very difficult to forget that this was a 17-year-old whose life was changed by a tragedy she caused.

Assured by King that she should feel no guilt about her friend's death, Bush responded, "Well, I mean it was an accident ... [but] it was my fault. I ran the stop sign ... I was a very inexperienced driver and on a dark road and all those things, but still it doesn't matter." Combining the dumb passivity of a child with the emotional comprehension of a grown woman, Bush recalled that she never spoke to her friend's grieving parents. "I never went over to his house," she said. "My parents went over the next day. And no one ever really suggested I go see them. And I know it ruined their life." Apparently, no one ever suggested that she seek any counseling after the accident either. "It was just how it was in 1963 in West Texas, where you just sort of swallowed your troubles and went on," said Bush.

In another, less personal segment, King asked Laura Bush how she felt about some of the social issues on which her husband took damaging stands. And Bush weighed in as some imagined that she might on gay marriage and abortion. In a clip that has been posted on Gawker,  she tells King of gay marriage, "I think there are a lot of people who have trouble coming to terms with that because they see marriage as traditionally between a man and a woman, but I also know that when couples are committed to each other and love each other they ought to have, I think, the same sort of rights that everyone has." Yes, Bush assured King, this is an area where she disagrees with her husband, but she's confident that her way of thinking will prevail. "It's a real reversal ... to accept gay marriage," she said. "But I think we could, yeah. I think it's also a generational thing ... that will come, I think."

As for abortion, Bush told King, "I think that it's important that it remain legal. I think it's important for medical reasons and for other reasons." And here was another point of disagreement between the Bushes, and another instance in which their marital dynamic is utterly mystifying. "I really understand his viewpoint and he understands mine," said Laura.

For those of us who cannot imagine differing with our life partners on issues so morally and emotionally crucial, Laura Bush's willingness to remain tethered to her husband is a puzzle. But watching her speak to King, I could not help remembering words that Curtis Sittenfeld put in the mouth of Laura's fictional doppelgänger, just after the heroine has revealed that she did not vote for her husband for president: "All I did is marry him. You are the ones who gave him power."