Why Arizona's immigration law should concern all minorities

It's attracting support from members of some non-Hispanic minority groups. Here's why they should reconsider 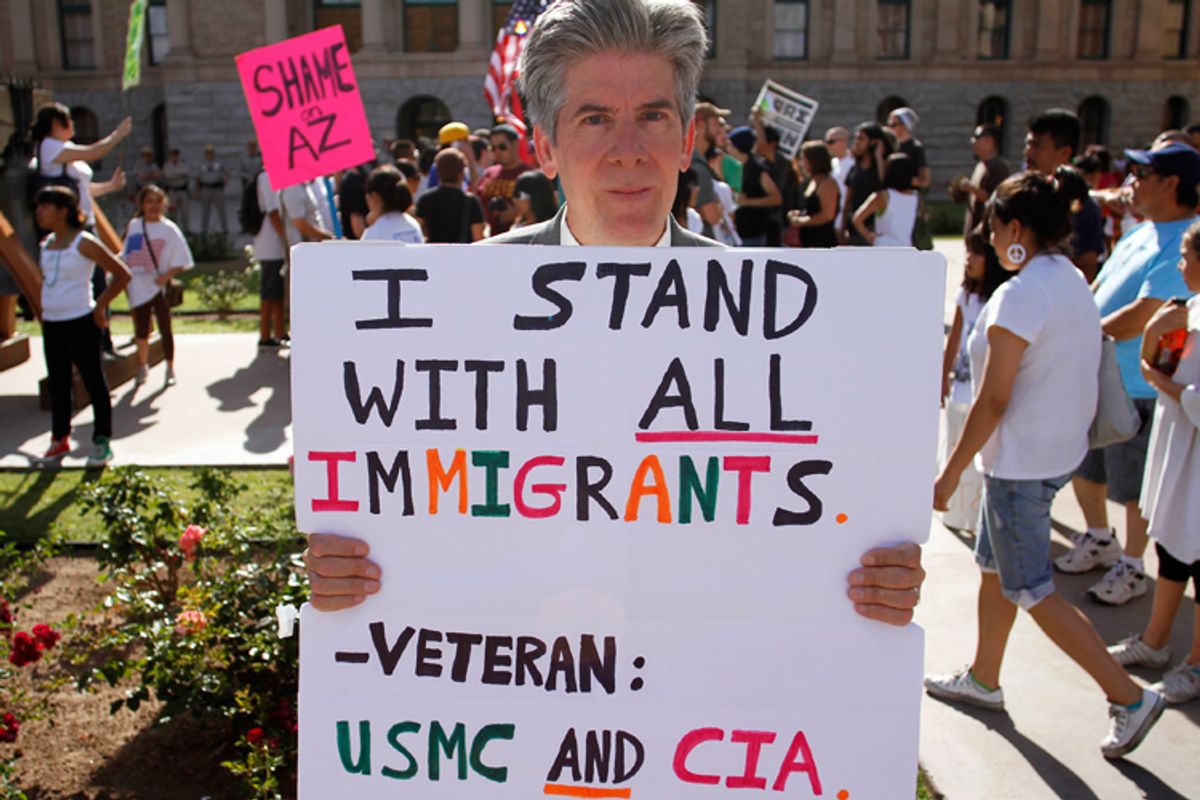 Who counts as "us" and who counts as "them" has shifted throughout modern American history. For decades, African-Americans were "them," judged to be members of an inferior race and denied basic rights. In the aftermath of 9/11, "us" and "them" were reshuffled as Muslims and those perceived to be Muslim were targeted and labeled "the other." Now, with the passage of Arizona's new immigration law, which enables police to demand papers of anyone "reasonably suspected" to be an illegal immigrant, Hispanics face significant ostracism.

Members belonging to "them" groups are profiled, harassed and subjected to discrimination, all on account of their appearance. Despite these common experiences, meaningful solidarity among the groups has not always followed. For example, while black organizations have criticized the Arizona law, it appears that African-Americans on the ground approve of or are ambivalent about the law. These attitudes not only compound Hispanics' isolation, they also undermine social justice more generally.

Arguments that illegal immigrants compromise public safety by engaging in criminal behavior, "take" scarce jobs from legal residents, and impose enhanced burdens on public services without contributing to tax revenues can resonate with non-white Americans. And the Arizona law undoubtedly advances the goals of addressing illegal immigration and its attendant externalities. But for minorities who might be tempted to embrace the new law, this cure is worse than the disease. Here are some specific reasons why all minorities in America -- an African-American in Baltimore or Muslim in Detroit, for example -- should care about and speak out against the immigration law facing their Hispanic brethren in Arizona:

It codifies discriminatory thinking: A necessary prerequisite for discriminatory treatment is the stereotypical viewpoint that someone who possesses certain characteristics, such as a specific skin tone, either inherently or presumptively possesses negative traits. For example, an African-American may be considered dangerous or a Muslim disloyal or suspicious. A fundamental problem with the Arizona immigration statute is that it validates a discriminatory viewpoint -- that if you appear Hispanic, you may be here illegally -- elevating it to an established norm and giving it the force and effect of law.

It encourages and sanitizes profiling: It is true that Arizona's law, as amended, would require an individual to be lawfully stopped before immigration papers can be demanded. But an officer may simply use minor, technical infractions as a pretext for a robust immigration search that may result in an individual's arrest, detention or deportation. Moreover, there is little reason to be confident that officers will seek out these infractions in a race-neutral fashion. Instead of applying the law equally to all, officers may focus specifically on "brown" people as part of the enhanced governmental interest in illegal immigration. Evenhandedness is even less of a prospect when one considers that officers may be even incentivized, through quotas, to apply the law and round up illegal immigrants. The legal stop prerequisite therefore may be but a modest formality or inconvenience to the officer, rather than a reliable safeguard for Hispanics.

It is a contagion of discriminatory law: In objecting to the internment of 120,000 individuals of Japanese ancestry, which itself was predicated on the notion that all Japanese were subversive, Justice Robert H. Jackson understood in 1944 that when "racial discrimination" becomes part of the law, it "lies about like a loaded weapon" available to be used by the government and ready to be expanded "to new purposes." The Arizona law, left unchallenged and on the books, may spawn other policies and practices in which those looking a certain way will be subject to heightened, different treatment under the cover of law.

It will provoke copycat legislation: At a minimum, the law will serve as a blueprint for immigration laws that will leave anyone of color (not just Hispanics) or with an accent susceptible to police scrutiny and social marginalization. Indeed, at least 10 other states -- Colorado, Georgia, Ohio, Oklahoma, Missouri, Maryland, North Carolina, South Carolina, Texas and Utah -- are reportedly contemplating similar measures. For non-Hispanic minorities to praise the Arizona law or sit idly by would be to be complicit in its expansion and in the possibility that they themselves will be covered by its permeations.

It triggers a moral imperative to defend Hispanics: Assuming that the law in question affects only Hispanics in Arizona, the law nonetheless exists as an injustice that triggers a moral duty to stand behind the maltreated. The civil rights movement, for example, was not only about advancement of African-Americans, but was an attempt to uplift all Americans. As Dr. King noted, "We are not struggling merely for the rights of Negroes ... We are determined to make America a better place for all people." The goal of the movement, he explained, was the creation of a "beloved community" characterized by mutual love, respect and trust of all Americans. The government targeting of Hispanics in Arizona threatens this vision of universal brotherhood.

It generates goodwill that can be banked: In assisting Hispanics, other minority groups will demonstrate their willingness to join forces with Hispanics in their hour of need. When and if those non-Hispanic groups are themselves in a situation requiring support, they will have good reason to call upon Hispanics to reciprocate and expend human, political and financial capital on their behalf. There is thus strategic value to side with Hispanics, even to the extent that the law does not affect other groups.

These points reflect the need for minority groups to recognize their shared experiences and come together when any one is in peril. The fact that 51 percent of Americans support the Arizona immigration law underscores the need for insular minority groups to stick together if they are to have any chance of undoing injurious legislation implicating any individual group. Arizona's immigration law should activate not only Dr. King's call to action, but a different American refrain: United we stand, divided we fall.

Dawinder S. Sidhu, an attorney whose practice focuses on individual rights in the national security context, is co-author of Civil Rights in Wartime: The Post-9/11 Sikh Experience. He wrote an amicus brief on behalf of constitutional law scholars in the al Maqaleh case, at the appellate level, in support of the Bagram detainees.