Back in the Depression, Americans knew how to get wild. But now we're wimps. Are we too distracted? 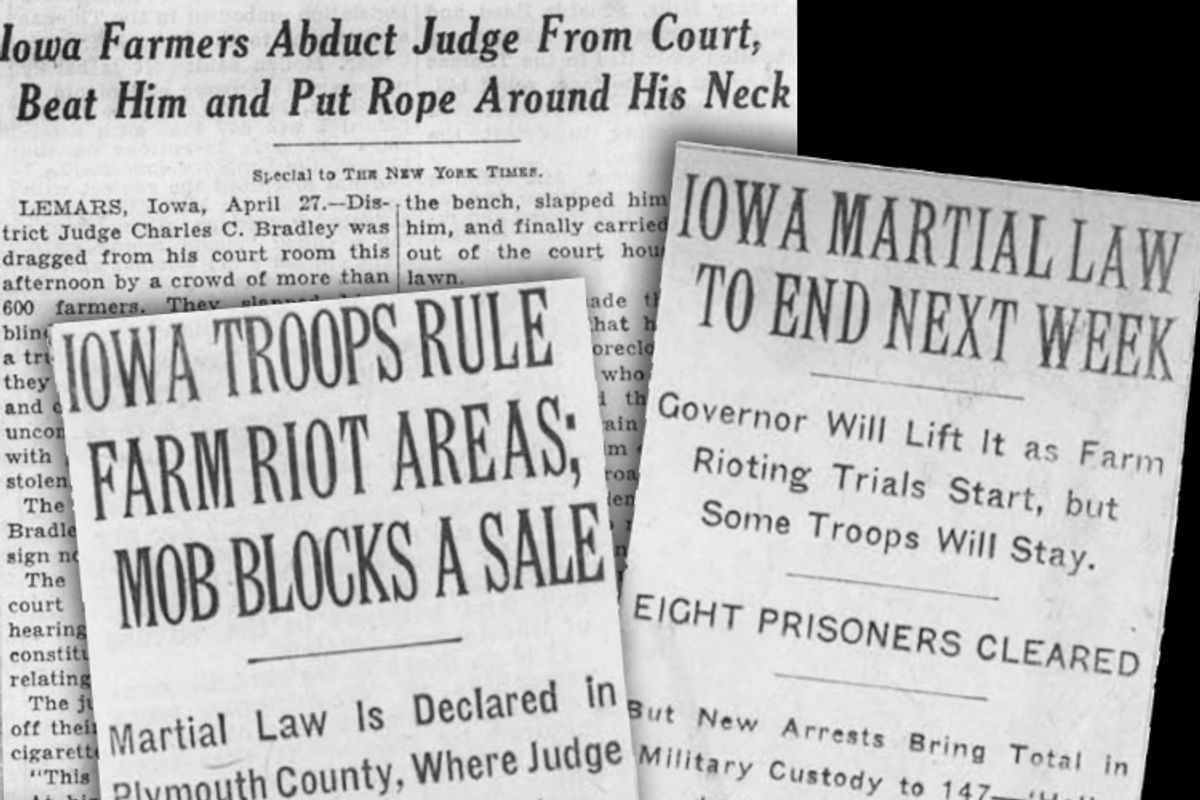 In the 1930s, writes Barry Ritholtz at The Big Picture, 600 Iowa farmers responded to a wave of mortgage foreclosures by abducting a judge and threatening to lynch him. Martial law had to be declared.

But today, in contrast to recent events in Greece, where citizens responded to the threat of government cutbacks in the social welfare state with impressive street demonstrations and deadly riots, Americans, writes Ritholtz, "remained remarkably placid" throughout "the real estate bust, credit collapse and market crash of 2008-09."

Ritholtz has a theory:

We are now defined by endless distractions, and 1000s of channels of hi def, flat screen, home theater. We have plenty of food. The nation remains wealthy, even if that wealth is unevenly distributed. Our never resting entertainment industry has managed to thoroughly distract us from our problems -- perhaps too well.

The Romans had it right: Bread and circuses are all politicians need to keep the population complacent and themselves in power.

I can see where Ritholtz is coming from. Last night, I watched "Glee" and "The Good Wife" back to back, while checking Facebook and Twitter during the commercials. For two solid hours I managed to successfully not think about the spreading oil slick in the Gulf of Mexico, the possible demise of the eurozone, or the endless compromises guaranteeing a neutered bank reform bill. And I don't even have cable.

There's an echo here of Barack Obama's anti-iPad thesis that electronic distraction poses a threat to democracy. And not without merit: A nation that spends its disposable time playing Farmville or World of Warcraft or watching American Idol while twiddling with their latest iPhone app may well be a nation so bludgeoned by distraction that it can't focus on rising income inequality or the capture of our political process by special interests. Or maybe the American angry mob in the 21st century just expresses all the anger that would otherwise manifest itself in physical violence via hyperbolic Internet postings.

But I also think there are some holes in the argument.

Namely, while there are many adjectives that one might apply to the wave of Tea Party populism generated in response to the Obama administration's policy initiatives, the words "placid" and "complacent" are not among them. Partisans have mobilized in the streets and townhall meetings. We are witnessing a very real grassroots political movement fueled by strong emotions of fear and anger that could have significant ramifications at the polling booth this November. No one has been killed during a bank fire-bombing -- yet -- but it sure isn't hard to imagine similar outbreaks of violence in the near future, given the overheated rhetoric and propensity for brandishing firearms displayed by conservative populists.

Granted, Tea Partiers are ostensibly protesting the introduction of socialism, instead of the dismantling of the European welfare state, so the two protest movements are not perfectly parallel, but the common thread of rage-against-the-government is easy to spot. And all this is happening in the context of an economy that has been improving, albeit slowly, for months. Imagine the anger if the Great Recession had degenerated into a true Depression? In that scenario, I don't think we'd be wondering why Americans seem to be such wimps, compared to the excitable Greeks.