Michael Lynche gets the boot, but as a performance from Chris Daughtry reminds us: Coming in fourth ain't all bad 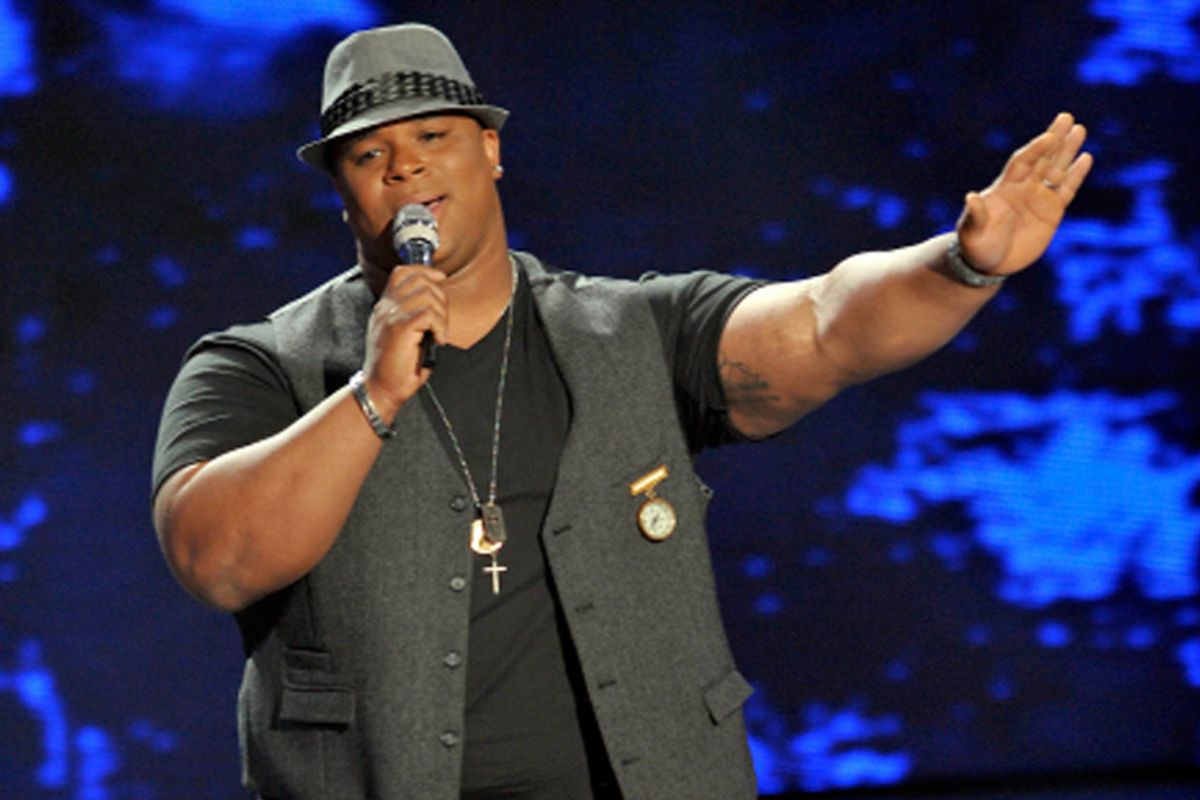 Wednesday night’s "American Idol Elimination Show" reduced the contestant field from a dismal four to a dismal three. The suspense was (not) palpable.

For all those naysayers who criticized those of us who, despite reason, logic or sanity, have continued to watch this disaster of a season, they should know that we are not alone. 37 million votes were cast Tuesday night, the highest number of votes cast this season in one night. Millions of people can’t be that stupid, can they? Never mind. It was a rhetorical question.

Fantasia, the "American Idol" winner of Season 3 in 2004, started off the show. Fantasia has enjoyed a highly successful career in the music industry, as well as performing on Broadway ("The Color Purple"). In other words, Fantasia has done good!

After her performance, all four contestants sat in stools in the middle of the stage. This was a new look. The contestants and us were told that the stakes were really really really big this week. The really really really big carrot being dangled in front of their faces was that the three remaining contestants would get to go to their home towns this coming week for a type of "hero’s welcome," replete with home town parades, praise, glory and adoration where fans and family members who won’t have a choice will come to bow down at their feet.

Ugh, it was just so wrong, but hey, it's America and we love our celebrities, even if they're only celebrities for 15 minutes.

Seacrest asked the contestants how they would feel about being able to go to their hometowns with "American Idol" camera crews in tow. Geez, you would think that they hadn’t seen their friends or families for at least ten years. Lee, Big Mike and Crystal's answers were horribly predictable and I wanted to scream at the TV, "Yes we know it would mean the world to you, you would feel so happy, you would die a happy person, you couldn’t imagine anything better than that home town parade." Casey wasn’t as ambitious as the other three. He just wanted to go home to hear people say "y'all." That Casey was one simple country boy. I had no idea.

Another new look was that to the right of the stage were seated members of the contestants' families. They were divided into: Team Crystal, Team Casey, Team Lee, and Team Big Mike. "American Idol" suddenly turned into "Amazing Race." I was getting so confused.

The results were presented "in no particular order" and Ryan became a drill sergeant as he barked, "Stand up all four of you."

Continuing in a serious and dramatic tone, Ryan said, "Mike and Casey, you sang, 'Have You Ever Really Loved a Woman.'" He went on to give them a summary of the judges’ feedback from Tuesday night’s show and checked in with Big Mike and Y’all to ask how they felt and the guys responded with the usual blah blah blahs.

It was then Crystal and Lee’s turn. "You two sang 'Falling Slowly.' After the nation-wide vote, Casey, you are safe and in the top 3!!!"

Casey looked shocked and his family, tweens, cougars, y’alls and Kara were ecstatic!!! Casey and his hair will be back next week.

Chris Daughtry was next to perform. Lest we forget, Daughtry is now the third most successful "American Idol" contestant in terms of record sales, behind Kelly Clarkson and Carrie Underwood (who won their respective seasons). The nation was shocked the night Daughtry was voted off. He was the fourth-place finalist on the fifth season of "American Idol." That’s the year that Taylor Hicks won. "Taylor who?" you ask? Exactly! Daughtry’s appearance on Wednesday night was a good reminder that the good don’t always come in first but can win in the long run.

After his performance, it was time for more space fillers and faux suspense building. Left standing were Big Mike, Crystal and Lee. After even more fakey suspense building moments and music, Ryan finally said, "After the nation wide vote, Mike, hang tight for a second. Lee, friends, Lee is headed back to Chicago."

Results were put on the "back burner for a second" as Bon Jovi took the stage. One thing about "American Idol," they don’t mess around when it comes to getting uber big name performers to appear on the show.

Back to Mike and Crystal. After a few more minutes of torture, Crystal was declared safe.

Talk about anti-climatic. The camera shot to Lynche’s crying wife and Big Mike was stoic, taking it like a Big Man.

Big Mike said in a small voice, "It’s been unbelievable. I just sit here right now and I wasn’t even supposed to be here. I thank God the judges saved me and I got to spend more time here and be with the people, perform for my wife. You know it’s all good man."

It was then time to look at Big Mike’s journey. Oh I’m a sucker for these journeys to the past. Especially with the inevitable tear jerking goodbye song. This year’s song is "Leave Right Now" written by Eg White (is this a real name?) and sung by Will Young, the inaugural winner of "Pop Idol" in 2002 (the British version of "American Idol"). You couldn’t say goodbye to Big Mike without seeing pictures of his newborn baby, the baby girl who was born when he was first auditioning and the clip of when the judges saved Michael. Did you see that show? Oh, that was one emotional ending when those judges saved Michael.

Big Mike sang one more time with his still-crying wife and baby daughter in the audience. Damn it all, I’m always a sucker for this sentimental stuff. These goodbyes are sappier than a Hallmark commercial but I fall for it every time. With tears streaming down my face and Kleenex in hand, I suddenly felt guilty about any mean thing or criticism I had leveled at Big Mike. I suddenly loved Big Mike (even though he really did have to go).

Big Mike, a personal trainer, new father and possessor of a huge heart and voice was gracious and grateful as he left the stage. And I remembered, if just for a moment, why it is I've always loved this show. Everyone loves to see the common man succeed. And for Big Mike, coming in fourth wasn’t anything to be ashamed of. If you don't believe me, ask Chris Daughtry.