Schools chief: groups of racial minorities getting together to study history "just like the old South" 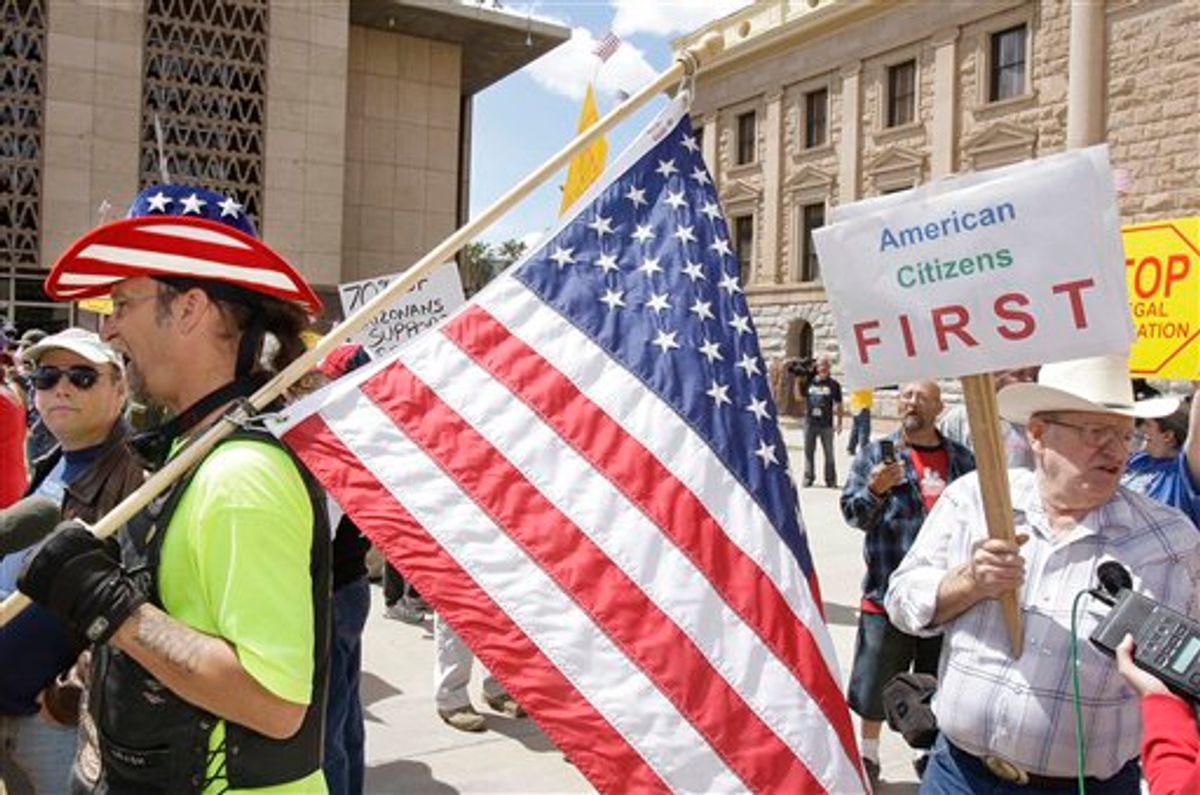 Brian O'Donnell, left, and Robert Kuhn, right, both from Phoenix, stand with dozens rallying in favor of the possible signing of immigration bill SB1070 by Gov. Jan Brewer as hundreds rallied in opposition to it Friday, April 23, 2010, in Phoenix. The sweeping measure would make it a crime under state law to be in the country illegally, and would require local law enforcement to question people about their immigration status if there is reason to suspect they are in the country illegally. (AP Photo/Ross D. Franklin) (AP)
--

When did Arizona get so mean? As if what they've done already isn't bad enough, Gov. Jan Brewer and the state legislature have just passed a law forbidding state public schools from teaching ethnic studies courses. Or, as they put it in the new legislation, students "should be taught to treat and value each other as individuals and not be taught to resent or hate other races or classes of people." A promising start there. I'm glad we're finally rooting out the Mexican Klan meetings in middle schools.

Apparently, state education chief Tom Horne (unsurprisingly, a current candidate for attorney general), is behind this, and he's especially incensed about one textbook in particular. "Occupied America: A History of Chicanos," by Rodolfo Acuña, has really gotten his goat. "To begin with, the title of the book implies to the kids that they live in occupied America, or occupied Mexico," Horne told the Los Angeles Times. You have to love a guy whose argument literally seems to be that we should judge the book by its cover.

So the complaint is that ethnic studies in general, and Chicano studies in particular, teach hate. In a moment of truly dazzling irony, Horne said, "It's just like the old South, and it's long past time that we prohibited it."

The logic seems to be that any time brown folks get together in groups to talk about their identity and history, they must be plotting against white people. Maybe something here sounds like the old South, but I don't think it's the students and teachers.

What Horne would probably say is that there's American history and that's what should be taught in American schools, thank you very much. But what this kind of argument relies on is the assumption that white people's history is history, and everyone else’s is "ethnic studies," or worse, "teaching hate."

Here's the truth of it: "We didn’t cross the border, the border crossed us" -- that's simply an undeniable historical fact. For better or for worse, the Southwest is part of the United States thanks to an aggressive war of conquest designed to expand the empire of slavery. The 150 years of Chicano history since then have mainly not counted among the things that should make Americans feel warm and fuzzy patriotism. But just because "Operation Wetback," for example, wasn't pretty doesn't mean it shouldn't be part of the curriculum.

Now, I'd have no problem with taking the teaching of this stuff out of the "ethnic studies" ghetto where it's kept and building it into the universal curriculum. Surely, every kid in Boston public schools learns about the Irish Potato Famine, right? Say it with me: Irish-Americans are white and English-speaking. That doesn't mean their history is more part of the special canon of universal American stories than, say, the mid-20th-century Bracero Program. And it definitely doesn't mean that an all-white class in Boston automatically becomes a breeding ground for racism when it studies the 1840s.

But teaching everyone about the conquest of the Southwest and the ensuing century-and-a-half of exploitation of Chicano workers is obviously not what this law has in mind. The idea, instead, is to teach nobody about it. And if nobody's teaching it, then kids in Arizona are, of course, going to grow up unaware. The implicit message to Chicanos is that they have no history, that the struggles of their ancestors are not relevant or important. And the lesson for white kids is much the same -- that their Latino classmates' experience of their own historical and ethnic identity is invalid. If it did matter, wouldn’t it be in the history books?

Denying the brutal and exploitative past of the Southwest is, ultimately, a way of trying to keep it going in the present. There's been, for centuries, a continuous labor market extending from California down through Arizona and Texas and into Mexico. It was once all part of the same country. The current border was drawn across the middle of it, by American soldiers. But the U.S. thought nothing of shipping people back and forth over this forcibly-claimed new frontier like cattle, to work when needed and be gone when not. In other words, we got the land and the workers, but didn't have to bother with the representation and respect. If students don't know this, they'll slip into thinking that it's just the natural state of being for the U.S. to exploit Mexican labor without according laborers dignity and rights.

I'm not making some faux-postmodern argument here about how all narratives are equally valid. This isn't America-bashing. There is simply a true story of the Southwest, and the state of Arizona has apparently just decided that it not be taught, and especially not to the students for whom it is a community inheritance.

Apparently, Horne has been trying to get a measure like this through since he heard, several years ago, that veteran organizer and Cesar Chavez lieutenant Dolores Huerta told students, "Republicans hate Latinos." Well, it's a damn fine job Horne, Brewer, and the Arizona GOP are doing of disproving that.