The Gulf oil spill spreads to the South Pacific

Offshore in more ways than one: The Deepwater Horizon oil rig flew a Marshall Islands flag 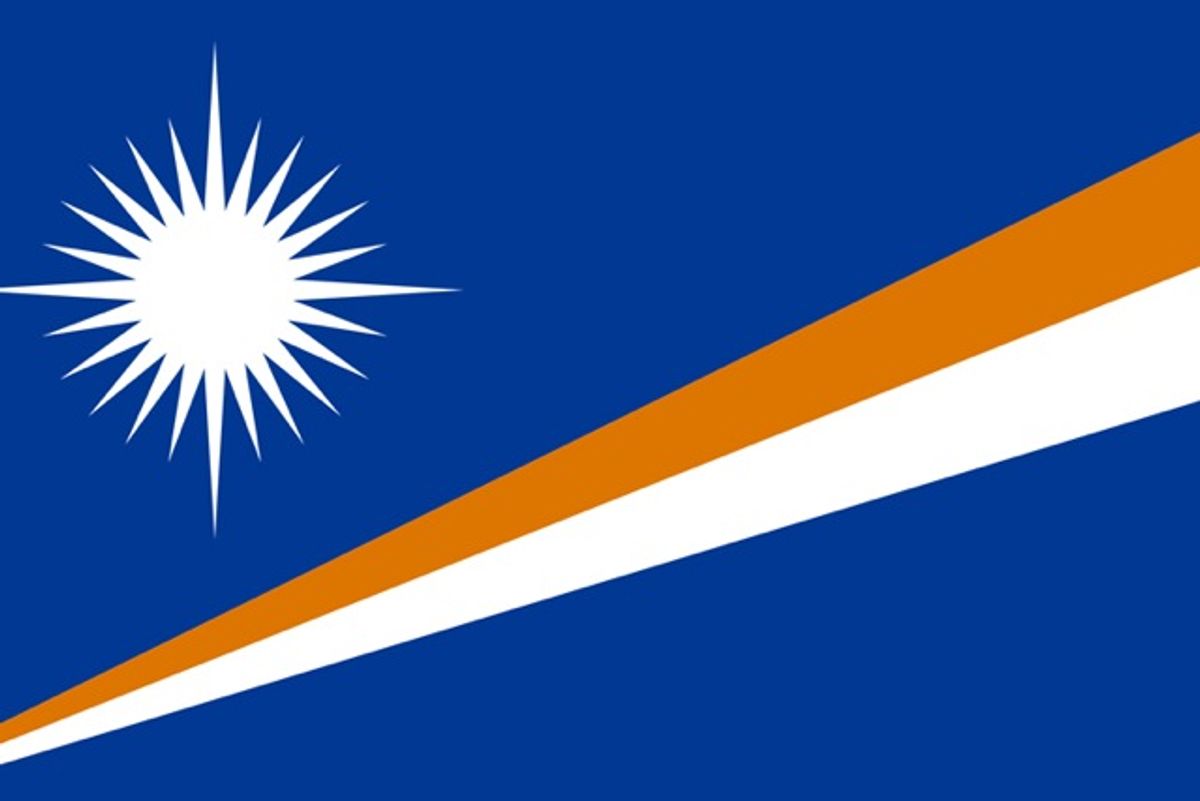 The flag of the Republic of the Marshall Islands.
--

Deepwater Horizon, the Transocean offshore oil rig currently shipwrecked on the seabed of the Gulf of Mexico, about 1000 feet below the surface, operated under a "flag of convenience" from the Republic of the Marshall Islands. This is by no means unusual. Marshall Islands operates one of the five biggest shipping registries on the planet, accounting for some 1500 vessels -- 35 of which, at last count, were Transocean oil rigs.

The reasons explaining the proliferation of shipping fleets registered in places like Marshall Islands, Panama and Liberia are well known: Low taxes, cheaper labor, and lax regulation. Just as multinational corporations industriously find ways to park assets and ownership in offshore havens, so do shipping companies use flag of convenience registries to lower their own costs. It's a perk of globalization, and while it might come as some surprise to realize that an offfshore oil rig -- or more properly speaking, "mobile offshore development unit" -- qualifies as a ship, it shouldn't raise any eyebrows to see the oil industry up to its neck in these tiny foreign nations. Oil companies were a prime driver of the widespread adoption of flags of convenience in the 20th century, aided and abetted by a cadre of elite former U.S. diplomats turned businessmen.

It's a fascinating story dating back to the 1930s, when the passage of the Shipping Neutrality Act in the United States in 1935 banned U.S. maritime shipping companies from delivering cargo to belligerent nations in Europe. According to historian Rodney Carlisle, writing in Business History Review in 1980, "Standard Oil and other petroleum shippers registered tankers in Panama to avoid the effect of" the neutrality law.

Under Panama's flag, the oil companies could continue to supply petroleum to Great Britain after Roosevelt banned U. S.-registered shipping from the North Atlantic war zone. Business considerations also stimulated the transfer of American ships of Panamanian registry. The organization of seamen under competing AFL- and CIO-affiliated unions led to labor battles and increased labor costs. Higher corporate and private income taxes of the New Deal and World War II gave further incentive, since Panama charged no income tax. Between 1939 and 1948, Panama's share of the registered tonnage of the world increased from 1.03 percent to 3.38 per cent.

As Carlisle wrote in 1981's "Sovereignty for Sale: The Origins and Evolution of the Panamanian and Liberian Flags of Convenience," Panamian registration had clear advantages that went beyond evading the neutrality restrictions:

An officer of the first shipping company to transfer a U.S.-flagged ship to Panamanian registry explained the appeal: "The chief advantage of Panamanian registry is that the owner is relived of the continual . . . boiler and hull inspections and the regulations as to crew's quarters and subsistence," pointing out that as long as the ships pay the registry fee and yearly (low) tax, "we are under absolutely no restrictions."

But Panama got greedy, and started extorting bribes from shippers in return for registry services, creating an opportunity for other aspirants to the shipping registry throne. Enter Liberia, with more than a small assist from Standard Oil and Edward R. Stettinius, Roosevelt's last Secretary of State. After the end of World War II, Stettinius embarked on an ambitious effort to develop a number of business opportunities in Liberia,  the profits from which would be shared with the Liberian government. In effect, Stettinius and a cohort of American business leaders rewrote Liberia's Maritime Code -- "read, amended, and approved by officials of Standard Oil," according to Carlisle. The first foreign ship to operate under the Liberian flag was the tanker "World Peace," chartered by Getty Oil.

Stettinius died in 1949, and most of his business ventures in Liberia failed, except for the shipping registry, which ended up providing the Liberian government with a significant source of revenue. But all the while, the flag registry program was administered by International Registries Inc., a Virginia-based multinational descended from Stettinius' original operation. During the 1990s, when Liberia fell apart in a vicious civil war, IRI gradually moved its business to Marshall Islands, which had become nominally independent from the United States in 1986. (The tiny South Pacific collection of atolls is itself a metaphor for globalization, having been sequentially colonized by the Spanish, Germans, Japanese, and finally, Americans.)

Does it make sense for an offshore operation capable of wreaking as much havoc in American coastal waters as a deepwater oil rig to be operating under a foreign flag, even when the corporation that owns the rig is headquartered in the United States? Probably not. Perhaps we should rethink that set up. But we have no one to blame but ourselves -- the modern flag-of-convenience system was conceived and set up by American diplomats, businessmen and oil men. We are reaping our own harvest.