The most infuential conservative publication you've never heard of

Limbaugh and Hannity are fans, and so are nearly 2 million others. Maybe it's time you learned about Imprimis 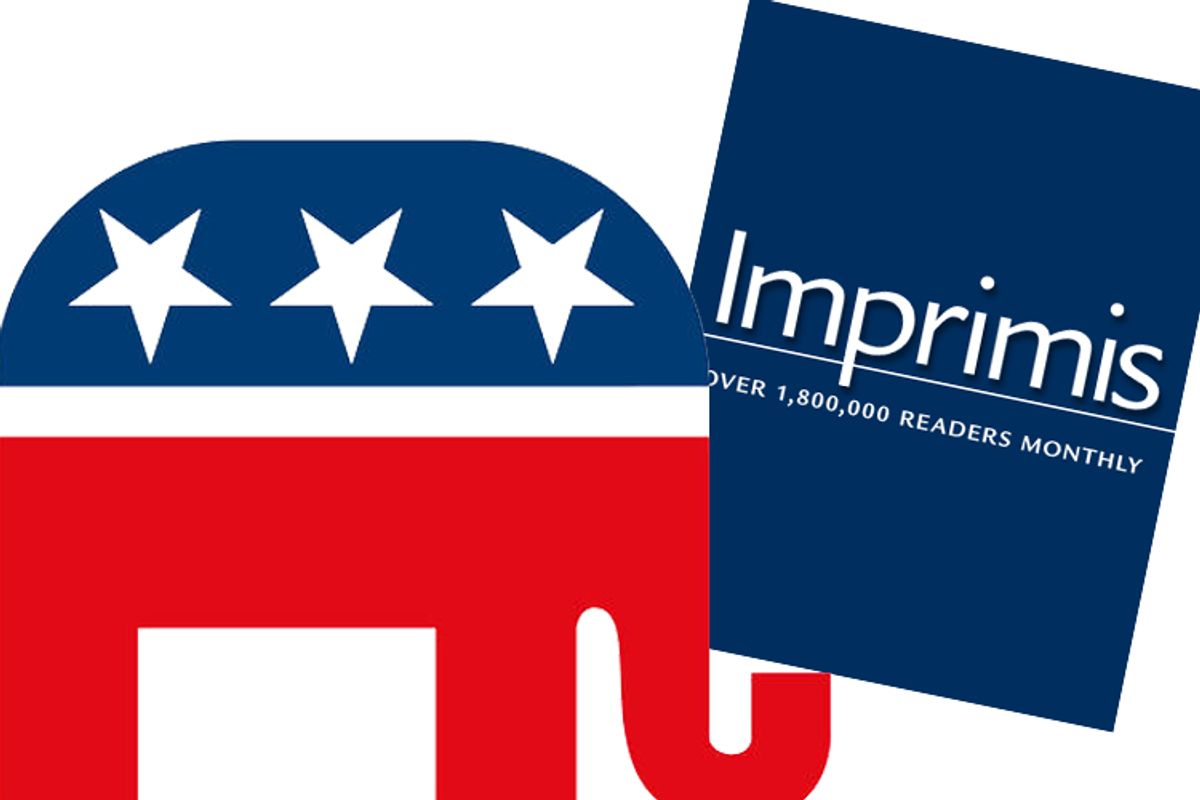 The conservative newsletter Imprimis has nearly 2 million subscribers, which is surprising because almost no one has ever heard of it. To judge by its presence on the national media radar, Imprimis is an unknown entity. But in the conservative grass roots, among the people who populate Tea Party rallies and line up for Sarah Palin appearances, Imprimis is very well known, and is often passed from person to person like a Grateful Dead bootleg. Despite existing beyond the rolodex of the mainstream for decades, Imprimis plays a crucial role in distributing conservative ideas to the rank-and-file -- ideas that can be based on information that is alarmingly inaccurate.

Imprimis was launched in 1972, the same year that Richard Nixon trounced George McGovern, when Hillsdale College began collecting speeches given by notable figures on its campus and at events sponsored by the school. Located in central-southern Michigan, Hillsdale is among the most right-wing colleges in the country. Its 1,300 students tend to see it as a bastion of righteousness in a sinful world. When the Supreme Court ruled in 1984 that Hillsdale needed to prohibit sex discrimination if it wanted to continue receiving federal largess, it became the first college in America to reject federal aid. "Hillsdale is not just another school," says John J. Miller, National Review's national political reporter, who calls the school "America's citadel of conservatism." Hillsdale students can't protest or distribute literature without administrative approval. The student newspaper is censored by the school, which also holds the libraries of Russell Kirk and Ludwig von Mises. Not for nothing did William F. Buckley once admiringly call Hillsdale "the most prominent conservative college in the country."

Imprimis was born originally "for a few thousand friends of the college," says Douglas Jeffrey, the editor of the newsletter. Its growth has tracked with the rise of the conservative movement. By 1991, according to Jeffrey, there were 300,000 subscribers. By 2000, it reached a million, and last year Imprimis reached a staggering 1,800,000 subscribers, surpassing Us Weekly in circulation and nearing Newsweek's total. Hillsdale only has 12,000 alumni, meaning that nearly everyone who gets it has no connection to the school. "Virtually everyone gets it," Miller says of the right-wing grass roots. "Certainly everyone knows about it."

All of this despite its almost Samizdat-like status. But with its wide dissemination across the conservative universe and its anonymity in the larger American culture, Imprimis is actually following in a long tradition. "Newsletters and pamphlets like Imprimis have played a key role in shaping conservatism and the conservative movement over the last 50 years," says Donald Critchlow, author of "Phyllis Schlafly and Grassroots Conservatism." "They helped the right bring attention to policy issues and also help grass-roots activists formulate policy and translate them into an election, helping mobilize voters and affect general policy."

Over the years, nearly every major conservative intellectual and writer has appeared in Imprimis' pages -- Ronald Reagan, Clarence Thomas, Tom Wolfe, Jeane Kirkpatrick, Milton Friedman, Margaret Thatcher, Irving Kristol, Richard John Neuhaus, to name a few. With such historic names, one might think the editing process would be rigorous. But it's not. Imprimis editors simply take the speeches and lectures delivered by prominent conservatives, make cosmetic changes to adapt the material to newsletter format, and publish them. "Content is generally edited for length and clarity," is how Jeffrey describes the process, when pressed on whether the pieces are fact-checked. The editors evidently believe that speech-givers are responsible for their own fact-checking. But readers of Imprimis are not made aware of this assumption. And reading through the publication's pages shows what happens when fact-checking is taken for granted.

In the February 2010 issue, for instance, Wisconsin Rep. Paul Ryan speaks about "Health Care in a Free Society." In his printed speech, he says that "Dr. Ezekiel Emanuel, one of the administration's point people on health care, advocates what he calls a ‘whole life system' -- a system in which government makes treatment decisions for individuals using a statistical formula based on average life expectancy and ‘social usefulness.'" Ryan's claim is actually a widely discredited assertion plucked from a widely discredited article in the New York Post by the widely discredited Betsy McCaughey. The nonpartisan factcheck.org website, run by the Annenberg Public Policy Center, determined that "Emanuel's meaning is being twisted. In one article, he was talking about a philosophical trend, and in another, he was writing about how to make the most ethical choices when forced to choose which patients get organ transplants or vaccines when supplies are limited." Very simply, McCaughey lied, Ryan repeated the lie, Imprimis published the lie -- and a few million conservatives read it as fact. "I relish every word in Imprimis," one fan wrote on the publication's Facebook page. "The idea that government will now make decisions about how long people should live and who should be denied health care is repugnent [sic]." It certainly would be repugnant -- if it were true. This is as ideal an example of conservatism's "epistemic closure" as one can find.

Tim Phares, a religious science practitioner in Laurel, Md., says he knows "plenty of people" who read Imprimis and who never went to Hillsdale, and he's signed up co-workers and family members to receive it. "It's popular in the conservative movement. Especially now that Rush Limbaugh, Sean Hannity and Mark Levin are promoting it," he says. Imprimis is so popular that conservatives savor the chance to get in its pages. Burt Folsom, a historian at Hillsdale, says the publication "plays a strong role" in the conservative movement on accounts of its sheer size. He says he's gotten a larger response from a piece that appeared there under his byline than in his Op-Eds in the Wall Street Journal. Now that Imprimis has a web presence -- its entire historical contents are available free online and it has a Facebook page with nearly 2,000 fans -- its reach will continue to expand. It seems impervious to the typical dangers facing a publication in the Internet era, as its slim contents can be digested online as easily as in print. It never depended on paying subscribers for revenue, relying instead on Hillsdale's remarkable fundraising prowess to finance printing and delivery. The college has an endowment of $282 million, an astonishing sum for a school of its size.

It is difficult to name a liberal counterpart to Imprimis. Critchlow says there was once a string pamphleteering presence on the left, starting with Communist Party publications in the 1930s and 1940s. The Students for a Democratic Society (SDS), the leading student activist organization in the New Left, revived this tradition in the 1960s,; "but beginning with the demise of the New Left, the left has lost its pamphlet tradition," Critchlow says. He sees left-wing blogs and online newsletters as a 21st century revival of pamphleteering. "They proved critical in mobilizing groups to vote for Obama," he notes.

Whether blogs will ultimately render old-style pamphlets like Imprimis obsolete remains to be seen. What's clear is that Imprimis has helped connect would-be conservatives across the country with conservative thought. As Democrats seek to extend their 2006 and 2008 successes into the future, they may want to consider the old American tradition of pamphleteering as a way of keeping voters engaged. The Imprimis model might be a good place to start.

Jordan Michael Smith is a writer in Washington, D.C., who has written for the Boston Globe, Slate, Foreign Policy and the New Republic.