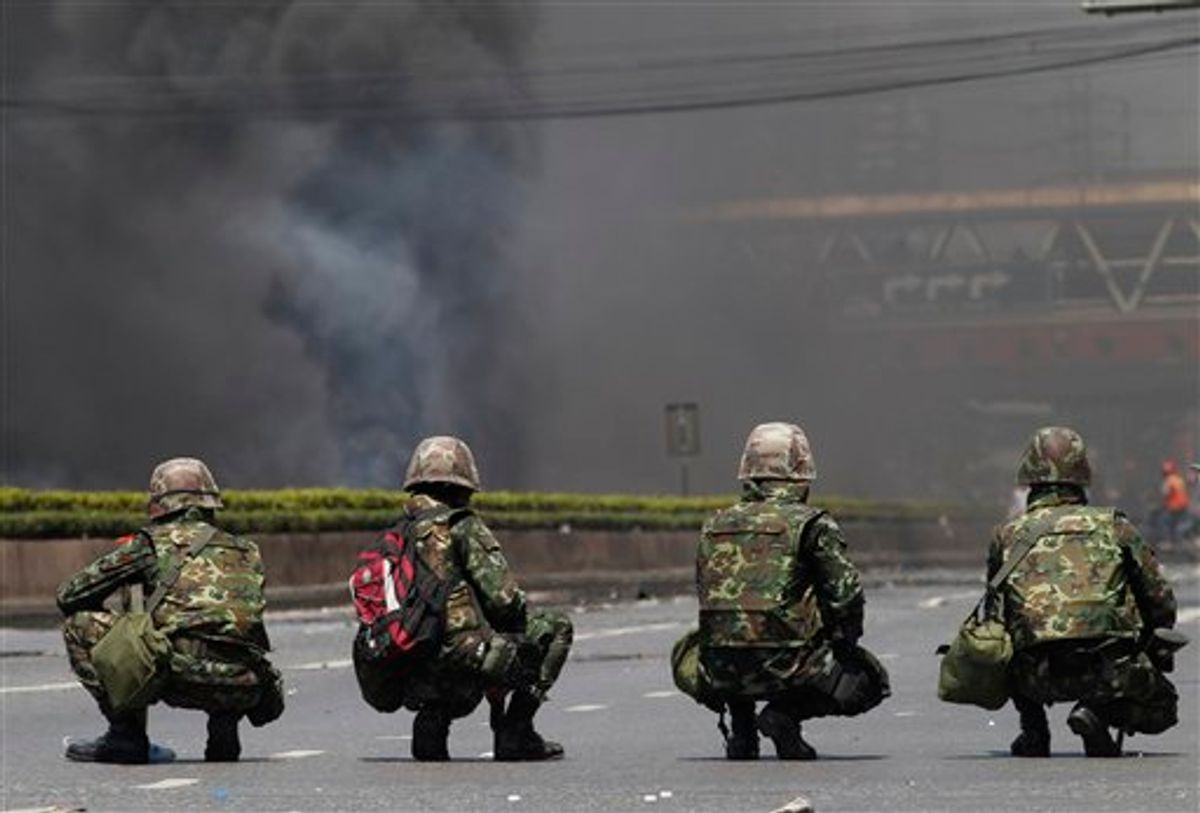 Thai troops fired bullets at anti-government protesters and explosions thundered in the heart of Bangkok on Friday as an army push to clear the streets and end a two-month political standoff sparked clashes that have killed five and wounded 81.

As night fell, booming explosions and the sound of gunfire rattled around major intersections in the central business district. Local TV reported that several grenades hit a shopping center and elevated-rail station. Plumes of black smoke hung over the neighborhood as tires burned in eerily empty streets while onlookers ducked for cover.

Among those wounded were two Thai journalists and a Canadian reporter, who was in a serious condition.

With security deteriorating and hopes of a peaceful resolution to the standoff increasingly unlikely, what was once one of Southeast Asia's most stable democracies and magnets of foreign investment has been thrust deep into political uncertainty. The crisis threatens its stability, economy and already-decimated tourism industry.

Violence escalated after a rogue army general regarded as a military adviser to the Red Shirt protesters was shot in the head Thursday evening, possibly by a sniper. A doctor said Maj. Gen. Khattiya Sawasdiphol was still in a coma Friday and he could "die at any moment."

Clashes since then have killed five and wounded 81, officials said.

"We are being surrounded. We are being crushed. The soldiers are closing in on us. This is not a civil war yet, but it's very, very cruel," Weng Tojirakarn, a protest leader, told The Associated Press.

Fighting has now killed 34 people and injured hundreds since the Red Shirts, mostly rural poor, began camping in the capital on March 12, in a bid to force out Prime Minister Abhisit Vejjajiva. They claim his coalition government came to power illegitimately through manipulation of the courts and the backing of the powerful military, which in 2006 forced the populist premier favored by the Red Shirts, Thaksin Shinawatra, from office in a coup.

Last week, Abhisit offered November elections, raising hopes that a compromise could be reached with the Red Shirts, who have been demanding immediate elections. Those hopes were dashed after Red Shirt leaders made more demands.

Late Thursday, the army moved to seal off the Red Shirt encampment in an upscale commercial district of the capital. Some 10,000 protesters, women and children among them, have crammed into the area.

"Our policy is not to disperse the protesters," government spokesman Panitan Wattanayagorn said late Friday. He said their mission was to set up checkpoints and "tighten" the area around the protest, but "there have been attempts to agitate the officers."

In later speech on national TV, Panitan said security forces hadn't entered the demonstration area but were attacked and forced to protect themselves.

He said security efforts would be stepped up in the coming days and "many areas would be under control soon." As he said that a large explosion rang out in central Bangkok.

Friday's violence was initially centered on a small area home to several foreign embassies, including those of the U.S. and Japan which were forced to close, but by midafternoon had spread around the 1-square-mile (3-square-kilometer) protest zone barricaded with bamboo stakes and tires. The British, New Zealand and the Dutch embassies, which are in the vicinity, also were shut.

Soldiers crouched behind a raised road divider in one area and fired rubber bullets, live ammunition and tear gas shells. Army vehicles were seen speeding on deserted streets littered with stones and debris. Protesters retreated and hurled rocks and insults.

Among Friday's casualties, a Thai cameraman from the VoiceTV news website was shot in his left thigh and a photographer for Matichon newspaper was shot in the leg, the news outlets said.

Canadian freelance journalist Nelson Rand, who was working for France 24 news channel, was hit by three bullets, the channel reported. One bullet perforated his leg, another hit his abdomen, another hit his wrist. He underwent surgery and was recovering.

Friday morning, protesters captured and vandalized two military water cannon trucks at a key intersection in the business district, just outside the Red Shirt encampment. They ripped the cannon from its moorings and used its plastic barrel to shoot firecrackers from behind a sandbag bunker they had commandeered from soldiers.

They later set fire to a police bus that sent thick plumes of smoke into the sky. Soldiers fired automatic rifles repeatedly.

Soldiers used a loudspeaker to send a message to the Red Shirts: "We are the people's army. We are just doing our duty for the nation. Brothers and sisters, let's talk together."

But a group of aggressive young protesters approached them on motorcycles and on foot, shouting obscenities. Two soldiers fired shotguns into the air and they pulled back but kept up their abuse.

Major roads around the protest site were closed to traffic, and the city's subway and elevated train shut early. Many shops in the capital also were shuttered.

"I've never seen anything like this," said Kornvika Klinpraneat, 28, a worker at a mini-mart near the protest area. "This is like a civil war. The battle is being fought in the middle of a city with innocent people being injured and killed."

The renegade army general Khattiya, who is accused of creating a paramilitary force for the Red Shirts, was shot in the head while talking to reporters just inside the perimeter of the protesters' encampment. Director of the hospital treating him, Dr. Chaiwan Charoenchokthawee, said Friday that Khattiya "could die at any moment."

It was not known who shot Khattiya, better known by the nickname Seh Daeng. But the Red Shirts blamed a government sniper.

"This is illegal use of force ordered by Abhisit Vejjajiva," said Arisman Pongruengrong, a Red Shirt leader. "Seh Daeng was shot by a government sniper. This is clearly a use of war weapons on the people."

The army denied it tried to kill Khattiya.

"It has nothing to do with the military. It has never been our policy (to assassinate). We have been avoiding violence," said Col. Sansern Kaewkamnerd, an army spokesman. Only a forensic investigation will determine who was behind the shooting, he said.

The two-day clashes marked the worst continuous episode of violence since April 10, when 25 people were killed and more than 800 injured in clashes between Red Shirts and troops in Bangkok's historic area. Sporadic clashes have occurred since then.

The Red Shirts see Abhisit's government as serving an elite insensitive to the plight of most Thais. The protesters include many supporters of former prime minister Thaksin whose allies won elections in 2007 after his ouster. Two subsequent pro-Thaksin governments were disbanded by court rulings before Abhisit was elected by Parliament.

Thaksin, a former telecommunications billionaire who fled overseas to avoid a corruption conviction, has publicly encouraged the protests and is widely believed to be helping bankroll them. He claims to be a victim of political persecution.