"Best Worst Movie": The cult of the truly bad film 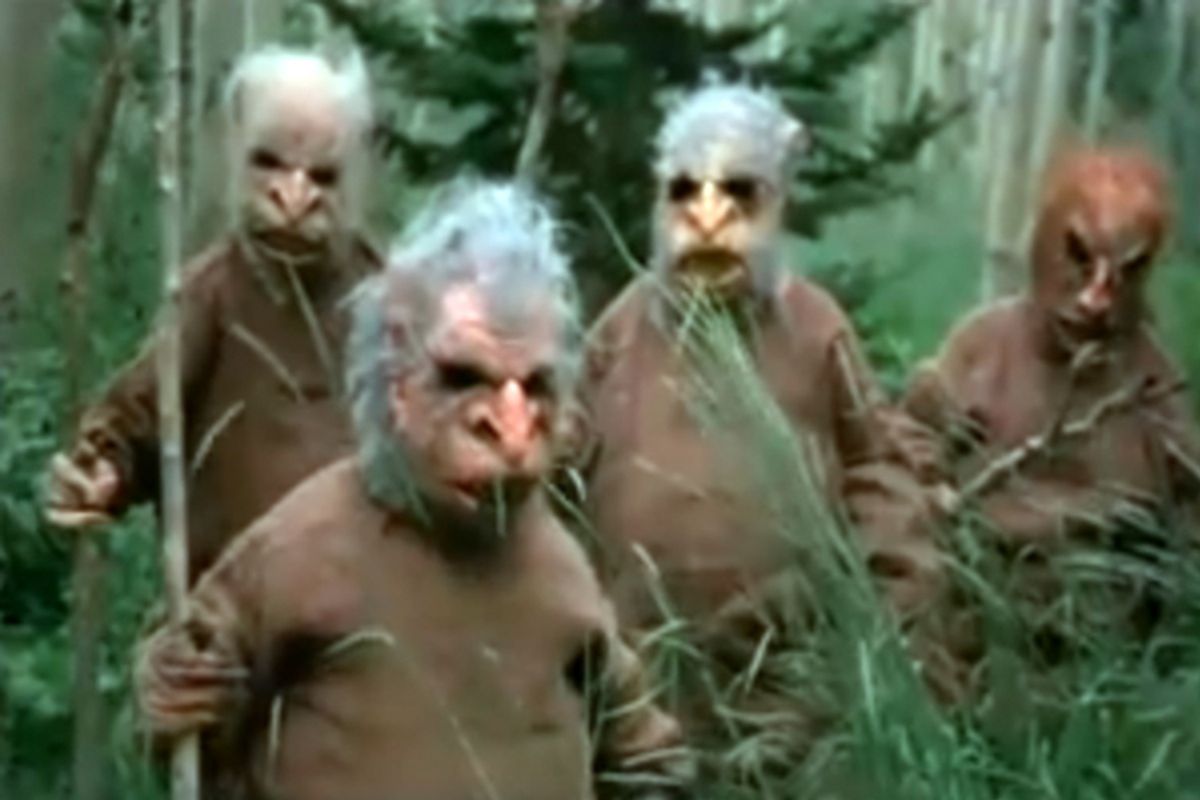 Bad movies don't just waste your time. They suck the life out of you, minute by minute, each cynically conceived, poorly executed shot nudging you closer to death, frame by frame. But there's a select class of movies so sublimely, ecstatically dreadful that the standard criteria no longer apply. It's not that they're so bad they're good; they operate in their own special world, where such terms no longer apply. Is Ed Wood's "Plan 9 From Outer Space" a movie? By every applicable metric, yes. And yet, it's so transcendentally odd that you don't dare look away, lest you miss whatever bat-shit notion is about to tumble out of someone's mouth.

The prevailing opinion, to the extent there is one, is that "Troll 2" is one of the worst movies ever made, a backhanded encomium that puts it in the company of "Plan 9," "Manos: The Hands of Fate," and more recent candidates "The Room" and "Birdemic." Like those movies -- and unlike, say, "The Hottie & the Nottie" -- "Troll 2" has developed a dedicated cult following of fans who prize its stilted dialogue, glazed-over acting and Z-grade effects, and have made minor celebrities of its stars.

Michael Paul Stephenson thought he'd gotten his big break when he was cast as "Troll 2's" juvenile lead, a freckle-faced moppet whose deceased grandfather returns to warn him of the existence of malevolent goblins intent on devouring him and his family. Instead, he found himself at the center of a straight-to-video stillbirth so wretched that he would literally run from the room when it turned up on HBO. And in 1991, low-rent filler like "Troll 2" turned up a lot.

Fifteen years later, Stephenson started hearing from fans of the movie, as did dental practitioner George Hardy, who played his father. Messages popped up on Stephenson's MySpace page with increasing regularity, and an intrepid radio reporter tracked Hardy down via the American Dental Association. Stephenson's documentary "Best Worst Movie," which opens in New York this week and will travel around the country through the month of July, picks up the story from there, tracking the ever-growing cult of "Troll 2" from home-grown viewing parties to sold-out screenings in New York, Los Angeles and Austin, Texas. What began as a spontaneous phenomenon, spurred on by trash-cinema connoisseurs, savvy video-store clerks and the movie's perch atop the IMDb's Bottom 100, grows large enough to suck in most of its cast members. Even Italian director Claudio Fragasso returns to the States with the understanding that his long-forgotten film has at last found an audience, only to be taken aback by the tenor of their appreciation. "People laugh at the funny things," he says after his first screening, "but they also laugh at the less funny things."

"Troll 2" offers plenty to laugh at, intentionally funny and (especially) otherwise. Start with the fact that, title notwithstanding, the movie contains precisely zero trolls, and has nothing at all to do with its ostensible prequel. Or that the goblins -- there are, at least, plenty of them -- are vegetarians, and in order to eat people they must first convince them to eat green-tinged food that turns them into human-plant hybrids. Care to see an ear of corn used as an instrument of seduction? Step right this way.

What distinguishes "Troll 2" and its ignominious ilk from run-of-the-mill failures is the sheer scale of their awfulness, a level of misconception and malexecution so profound that it inspires a perverse kind of awe. Anyone can make crap, but the proverbial horde of monkeys tapping away at their infinite typewriters might well produce "Hamlet" before they came up with this soiled pearl, from the opening of "Plan 9 From Outer Space": "We are all interested in the future, for that is where you and I are going to spend the rest of our lives. And remember, my friends, future events such as these will affect you in the future." You could scour acting classes across the country and never find performances as slack-jawed and zombified as those in "Troll 2."

"The fundamental, I guess, magic with movies like 'Troll 2' is that they're honest and they're genuine and they're sincere," Stephenson said in New York this week. "'Troll 2' is the perfect example of everyone putting their heart out on the line and trying their best with such sincere intentions, and then failing in every imaginable and unimaginable way."

While you might assume "Troll 2" aficionados are sarcasm-drenched hipsters in search of a cinematic Blues Hammer, "Best Worst Movie" makes the case that their appreciation is far less convoluted. "It's genuine," says Jesse Hawthorne Ficks, programmer of the Midnites for Maniacs series at San Francisco's Castro Theatre. "There's no irony going on." Caitlin Crowley of Cambridge's Brattle Theatre says that to fail to appreciate "Troll 2," "you've got to, like, not have a heart or something."

What's striking about the fans' enthusiasm is how unironic it is. It's as if the movie's lack of self-consciousness allows them to shed their own. Rather than sneering at "Troll 2's" failure, they replicate its goofiest excesses, proudly sporting T-shirts emblazoned with the name of the goblins' home base, Nilbog, and whipping up food with the telltale electric green hue of the goblins' poisoned treats. It's the movie's very incompleteness that allows them to fill in the blanks. Ersatz bombs like "Snakes on a Plane" can never achieve the blissful idiocy of the truly superbad. (In that case, the creativity of the fans' responses far outstripped that of the movie itself.) As Susan Sontag wrote in "Notes on 'Camp,'" "Pure Camp is always naïve. Camp which knows itself to be Camp ('camping') is usually less satisfying." "Troll 2" still lingers in the IMDb's Bottom 100, albeit at a more respectable/less remarkable 59. But now the one-star reviews are balanced by a handful of 10-star notices, and even the pans are tinged with glee.

Stephenson recalls nervously attending his first screening, wondering, "Are people going to boo and say we suck and throw tomatoes at us?" Instead, he says, he found people "enjoying 'Troll 2' in a way that I've never seen people enjoy a movie. I look back on the whole thing now and I can't honestly tell you that 'Troll 2' is a bad movie. I don't know if I believe in guilty pleasures. It's one of those things: You either like it or you don't. The reasons why people like it, that's kind of a non-issue."

There is, however, a dark side. The very guilelessness that fans of the superbad treasure means that someone, somewhere, has to be the butt of the joke. No matter how wholeheartedly Ed Wood's fans embrace the deranged aesthetics of "Plan 9" and "Glen or Glenda," there's still an ineradicable tinge of condescension. (Put it this way: If Tim Burton admires Wood's singular idiosyncrasy as much as his 1994 biopic would have us believe, why have Burton's subsequent films increasingly tended toward faceless hackwork?) It boggles the mind to think that, so many years later, Fragasso still maintains that "Troll 2" is "a film that examines important issues, like eating, living and dying." But it's also hard not to sympathize when he attacks the actors at a convention appearance blithely recounting stories from the film's disastrous production. Fragasso's sincerity makes the cult of "Troll 2" possible, but it also prevents him from joining in the fun.

In recent years, the auteurs of superbad cinema have attempted to climb onto their own bandwagon. Tommy Wiseau, whose slurred, lurching performance in "The Room" qualifies him as the Marlon Brando of trash, sold out Manhattan's 1,200-seat Ziegfeld Theatre earlier this month, turning a tidy profit off a 10-minute Q&A. James Nguyen's awesomely crude "Birdemic" uses its risibility as a marketing tool. The movie's trailer (far more professionally assembled than the film itself) is mainly devoted to night-vision footage of audiences doubling over with laughter. Nguyen didn't set out to make a seventh-rate rip-off of "The Birds" with special effects that look as if they were created on a Commodore 64, but if promoting it as such gets audiences in the door, he seems happy to roll with it.

Although Claudio Fragasso's abrasive personality makes for some of "Best Worst Movie's" more uncomfortable moments, Stephenson says that the more he watches the documentary, the more he comes around to the director's point of view. "Claudio's point makes the most sense to me," he says. "At the end of the day, whether you laugh or it makes you cry or it scares you, the most important thing is that a movie moves you. Think of how many films with greater resources, greater stars, greater talent, are forgotten about almost the instant they're done being made."