When President Clinton confronted disparities in cocaine sentencing, she bluntly urged him to put politics first 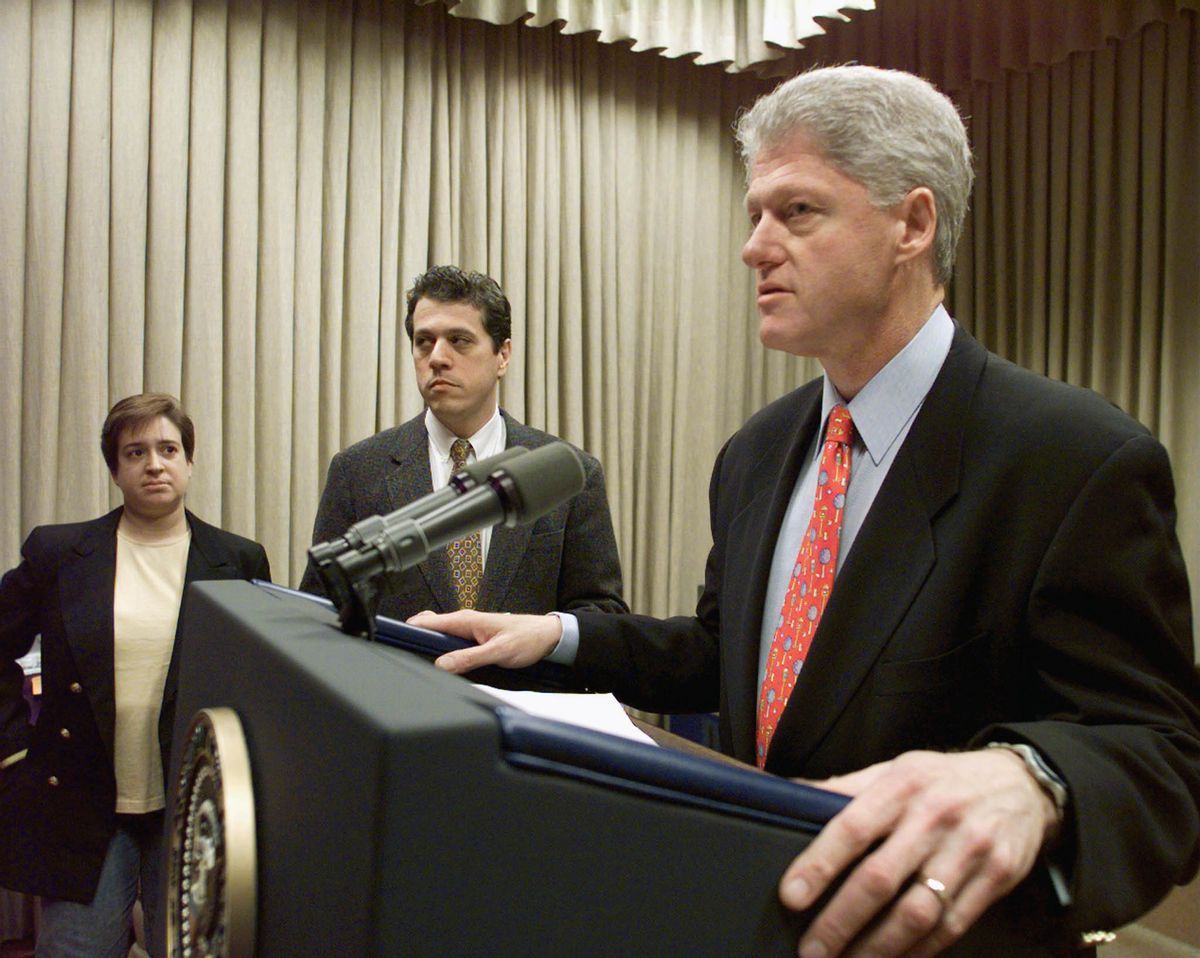 President Clinton and White House staffers Michael Waldman (C) and Elena Kagan prepare for the State of the Union Address in the Family Theatre of the White House January 16. As House prosecutors wrapped up their presentation in the Senate impeachment trial, Clinton plans to use the January 19 speech to press for an overhaul of the Social Security system, senior aides said. RC (Reuters)
--

For decades, the senseless disparity in sentencing of crimes involving plain old cocaine and crack cocaine -- with the latter  punished up to 100 times as harshly -- has efficiently swelled the disproportionate number of minority prison inmates. In practice this means that major drug dealers selling white powder often get off easier than the street-level crack dealers who are their customers.

Eliminating (or even just reducing) that difference is a critical aspect of drug law reform, as well as a simple gesture toward racial justice. It is a progressive goal that dates back to the Clinton presidency. But a document unearthed from the Clinton archives indicates that Supreme Court nominee Elena Kagan advised President Clinton not to go there -- for purely political reasons.

As first reported in Politico, Kagan prepared a  memo on the issue in her role as deputy director of the president’s Domestic Policy Council in the late '90s.  Like several similar memos that indicate her "centrist" positioning on issues of race and reproductive rights back then, its blunt wording suggests that she never expected anyone outside the Clinton White House to read it.

"Our more nuanced message will not sell as well as the 'tough on crime' opposition message in an age of sound bites," she explained, noting that congressional resistance to reforming the law would result in a stalemate. In essence, the memo advised Clinton to ignore the recommendations of his own Federal Sentencing Commission, which had studied the crack/powder problem as part of the 1994 Omnibus Crime Bill at the behest of the president.

Subsequent history proved Kagan’s estimation of the political hurdles to have been accurate. Republican opposition blocked any change until last March, when the Senate Judiciary Committee finally passed a bipartisan compromise. Now, instead of a ratio of 100 to 1, the crack offender may endure a federal prison sentence that is merely 18 times as long.

The question that someone should ask Kagan, when she appears before that same committee for confirmation hearings, is whether she feels any shame over her evident eagerness to sacrifice decency for expediency. If she and her colleagues on the Domestic Policy Council believed the disparity unjust, shouldn’t she -- and the president -- have advocated change? Or would she seek justice only when victory is assured? It isn’t hard to imagine the scathing answer of the late Justice Thurgood Marshall, for whom Kagan clerked and whom she no doubt admired.

Perhaps Kagan was just reflecting the priorities of the Clinton White House, with her ambition extinguishing a fiery instinct for decency. Perhaps we can hope -- as a former White House colleague who says she is smart and liberal told me -- that she will realize "the game is over for her now." Well, the game is almost over and she will almost certainly win. Playing for personal advancement could give way to principle. She certainly wouldn’t be the first justice whose moral sense and political courage expanded after joining the Nine.