Martin Amis' new novel: Why the haters are wrong

Critics haven't been kind to the literary icon's sex-filled "The Pregnant Widow" -- but it's a raucous, funny read 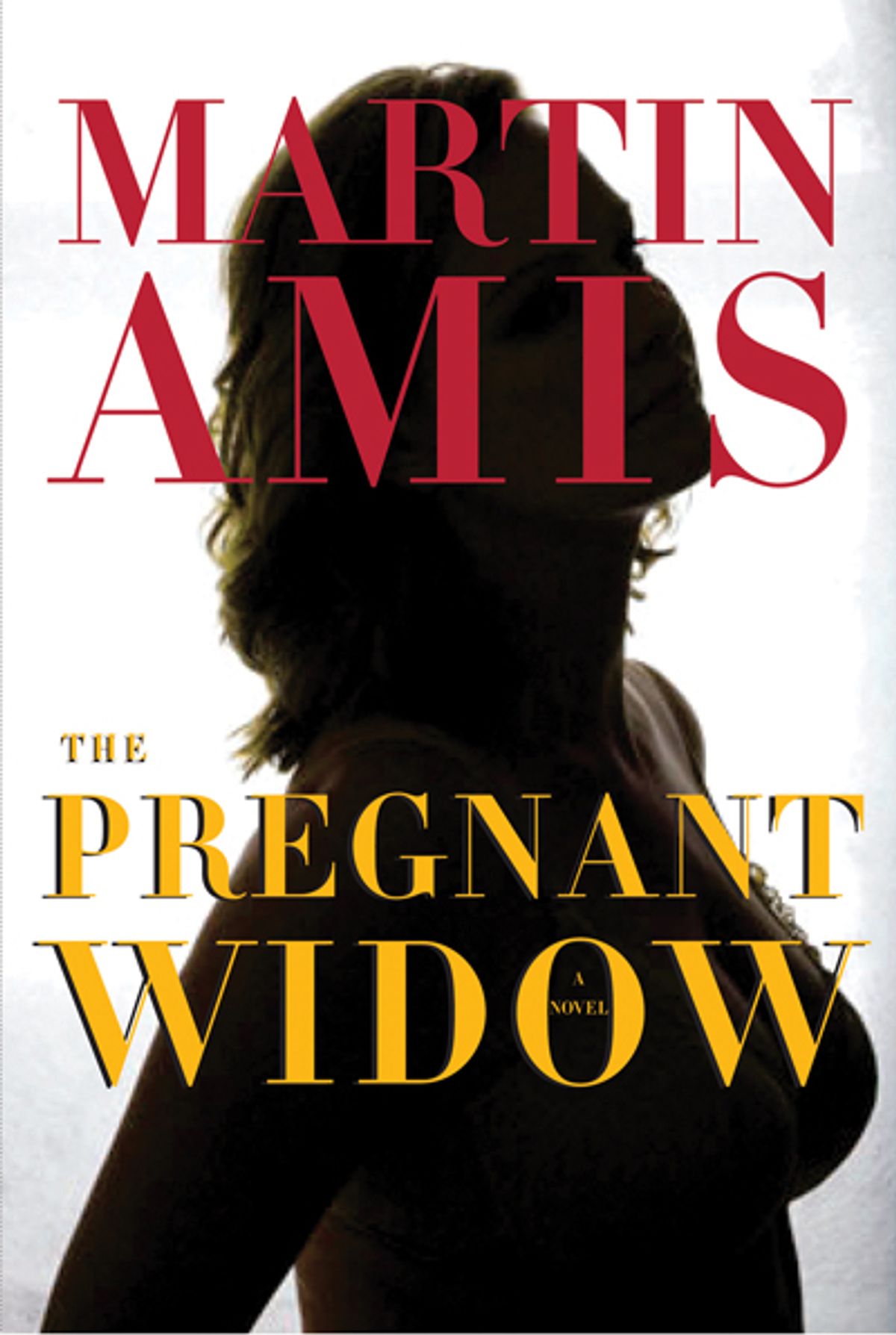 "The Pregnant Widow" by Martin Amis
--

Amis is sixty now, and his latest novel, "The Pregnant Widow," revisits a Charles-like youth -- which is to say, the youth of sex-crazed Amis himself. It's 1970, and twenty-year-old Keith Nearing, a student of English, is weathering the sexual revolution in an Italian castle stocked like a pond with gorgeous girls. Young Keith can't help suspecting that "history was arranging it ... with Keith in mind." Yet the book is narrated by Keith's conscience, aged sixty, so we're given to see the earthly delights of 1970 as "a sexual trauma," the "opposite of torture," yet responsible for lasting damage. The revolution was then well into its Reign of Terror phase.

The "pregnant widow" of the title comes from Alexander Herzen: "[T]he departing world leaves behind it, not an heir, but a pregnant widow. Between the death of one and the birth of the other ... a long night of chaos and desolation will pass." Fear not: this is far funnier a book than its somber epigraph would have us believe, a greedily anticipated return to form, blending social comedy, farce, even height jokes. The latter are partly at Amis's own expense -- Keith dwells in "that much-disputed territory between five foot six and five foot seven" -- but there is also Adriano, a muscular, daredevil, but tiny Italian count. "Adriano had many cars," Amis writes, "including a racer that seated only one, like a canoe; at its wheel, in his goggles, he resembled a badger motoring its way through a children's book."

Isn't this a bit cheap, playing a dwarf for laughs? Not really, because the novel takes place at a moment when physical beauty is the only currency being honored. There is almost-pretty Lily, Keith's girlfriend, or former girlfriend, with whom he enjoys what we enlightened moderns might call a "friends with benefits" arrangement. Scheherazade is the significantly more desirable "monokini"-wearing blonde, whose ample embonpoint occupies Keith's thoughts all day, all night. Then there is Gloria Beautyman (based, the critics inform us, on Tina Brown), the gigantic "A" to Scheherazade's divine "T."

"The feminine body," Keith muses, little Oxford-bound shit that he is, "seemed to be made of pairs. ... And men were the same, except for the central anomaly. Men had ... this central question mark. A question mark that sometimes became an exclamation point; and then went back to being a question mark."

The central question mark of this languid Italian summer is whether Keith will bed Scheherazade. As plots go, this is slighter than slight; it's practically "The Very Hungry Caterpillar."  Nevertheless, that old Amis magic -- prismatic linguistic invention, honesty bordering on cruelty, hearty laughs, and sex divorced from either lyricism or titillation -- ensures that the reader never notices, or complains. Amis is significantly warmer, more empathetic, toward his characters than he's been in the past, but that doesn't mean he describes them any less vividly or justly.

As a matter of fact, some of these characters behave in ways that younger American readers may find unintelligible as comic fodder. Keith attempts to drug his girlfriend ("he smoothly sprinkled the pre-atomised Azium into Lily's prosecco") so that he can indulge in a promised tryst with Scheherazade -- isn't that, like, not okay? We are also made to wonder whether Adriano, having offered a tragic explanation for his stature (prenatal malnutrition, in a Nazi camp), hasn't in fact hired actors to lie on his behalf ... So Amis's characters, lest their be any disappointment, are rotten as ever.

The tryst doesn't happen, because Keith drunkenly insults the unexpectedly religious Scheherazade with an atheistic rant. And Keith, while he still thinks he's waiting for his rendezvous, watches time slow to a crawl. He speaks of the "crippled clock"; his watch stops "even trying to keep the time." Later, the elder Keith, the superego Keith, speaks of "the bullet train of the fifties, where the minutes often dragged but the years tumbled over one another and disappeared."

Yes, that's relativity. When Lily determines that Keith has tried to drug her and to sleep with Scheherazade, Keith must face the consequences of his transgression without having committed it. It's an amusing allegory for conscience, which will whip us soundly for what nobody else has even noticed.

The dialogue in "The Pregnant Widow" can certainly be pompous and grating; as Doug Johnstone of the Independent on Sunday put it, it's "full of supposedly witty conversations ... and endless narcissistic navel-gazing." In the original "Decameron," they tell stories; in this one, they only read them -- Keith is working on a heroic stack of English novels, from Fielding on -- and allude to them and obsess about their vanishingly slim sexual content. (Of Richardson's Clarissa: "It's not just fucks, Lily. One fuck in two thousand pages.") Keith also has a trying habit of reciting etymologies.

These bright young things are insufferable, to be sure, but in precisely the way we'd imagine privileged, overeducated Brits in the 1970s to be. And there comes a point when Keith's, and the narrator's, fondness for allusion and quotation looks like something very different from trying too hard: it's an illustration of what life is like for those who deal almost exclusively in words and stories and their meanings. Even in his romantic (or, at any rate, sexual) life, Keith speaks of his "[f]ear of the fatal misreading."

Some of the more minor figures, like Keith's hard-partying friend Kenrik, or Gloria and Scheherazade's largely absent boyfriends, or boorish Rita, are not impressed deeply on the reader's imagination. One who is -- though not until the final quarter of the novel, a less-entertaining history of Keith's life from 1970 to 2009 -- is Violet, Keith's sister. Keith is adopted, so they aren't related by blood, but this doesn't diminish his agony as he watches her become a casualty of the revolution's chaos and desolation: Violet, based on Amis's late sister, Sally, is done in by addiction and promiscuity.

Some critics are skeptical that the sexual revolution even deserves Amis's animus. He has been pilloried, too, for trying to wrest universal truth from his individual experience. But his experience of Sally's promiscuity, which was pursued first in "the spirit of the times" and ultimately in search of something like protection or love, is that it placed her at the mercy of men for whom sex had nothing to do with love and often plenty to do with violence. It's hard to deny that "free love" can have this consequence.

Amis is not, in the end, opposed to "free love," in the sense of sex exempt from the positive coercion of a hypersexualized culture or the negative, misogynistic coercion of radical Islam. "It was an important principle," Keith notes, "and he assented to it: don't do anything for the crowd. And not that, not that, especially not that: the intimate, the innermost. It worked both ways. With sex, don't do it, and don't don't do it, for the crowd."