Live from the Obama trial: Alex Pareene in Harlem

The latest: Rev. Manning explains why Obama won't be hanged, even though he should be 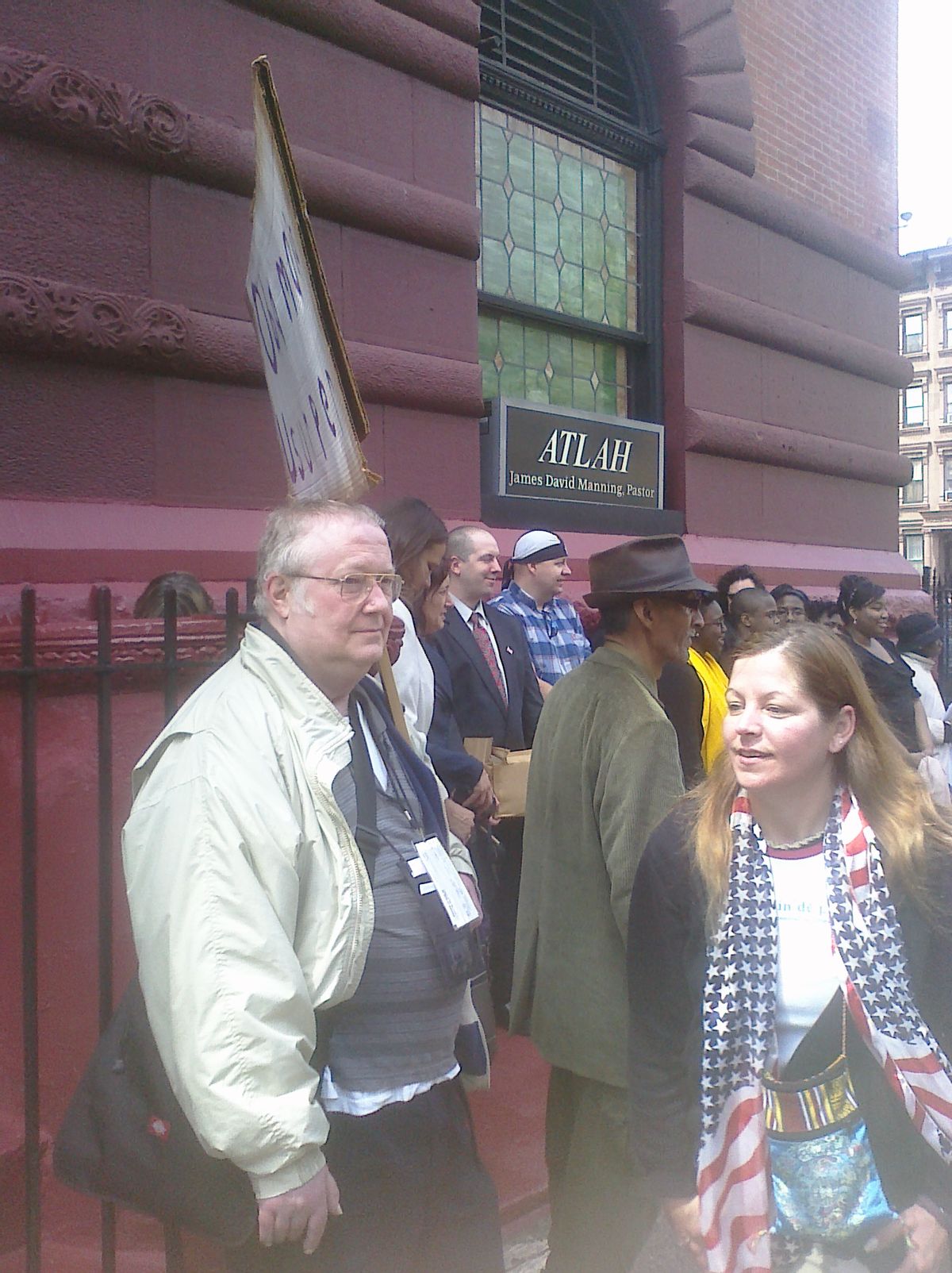 (Alex Pareene is in Harlem for the "trial" of President Obama at James David Manning's ATLAH World Ministries Church. He'll be updating this post all day with pictures, description and video from the festivities.)
Note: Video of a confrontation between the church's pro-Obama neighbors and the assembled birthers is below.

5:00 pm:  I'm done with the day's events. For now, here are my notes from 3 pm on, featuring the rest of jury selection and the Reverend Manning's opening statement. Check back later for a full report. (And scroll down for video of the pre-trial skirmish outside the church between neighborhood residents and trial attendees.)

4:00 pm Finally, Manning reveals why we're not trying Obama for treason. He told "some Tea Party people" a while back that they should go after Obama's citizenship instead of his policies. Becaue if they convicted him of treason, they would get to execute him! This didn't go over well. Manning claims the CIA visited his church. So he wants to make it clear: he will not attempt to execute Obama at the conclusion of the trial. (He does still think Obama should be hanged, though.)

3:45 pm Manning asks permission to make his opening statement before the jury is sworn in. He tells us about how George Washington and John Jay invented the natural-born citizen clause, just in case of a situation like this one. "This is not about racism. It just happens that Mr. Obama happens to be alleged to be black. This is about the constitution." If we let one guy violate the constitution, everyone will want to! Also, an allegorical explanation for attacking Obama's citizenship instead of his policies: If you know a man is guilty of rape, but you challenge him on "what kind of coffee he drinks," that is "psychologically imbalanced." Then Manning brought up the Illuminati. Also: Howard Dean, the Clintons.

Also: McCain lost the election on purpose, to allow Obama to "waltz into the White House." (Man next to me, softly: "Oh my god.") Manning: "We're not talking about whether or not Obama stole a car!"

3:30 pm One juror wants to know why we're not going to prosecute Obama for treason and sedition. Manning: "To prove treason would not be the most difficult thing in this trial" but he is convinced that the American people will uphold the results of this trial, and they will demand Obama's imprisonment. If he's convicted of treason, the American people will demand his death. "And a number of people, not that I'm one of them, are opposed to capital punishment." This is an odd and rambling answer, but basically the standard of proof would be higher if they were arguing a capital case, and also the American people might be uncomfortable executing an American president.

65 people registered to be jurors. At the end of the day, there were 13 people sitting on the jury. They will be sworn in first thing tomorrow, but not by Unger -- he will miss tomorrow's proceedings in order to observe the Sabbath. Manning's church observes the Sabbath on Saturday as well, but their worship will be held at 116th and Broadway, outside Columbia.

3:35 pm There are at least five LaRouche followers sitting near me. The next juror is a Deacon. "I have been to the Waco Memorial 16 years in a row. So the government knows me, they have a file on me." This leads Manning into an odd question about whether or not the media might characterize Manning as a David Koresh-style "runaway preacher" whose followers "deserve to be killed."

One important fact I learned: when Barack Obama was supposedly attending Columbia, he was actually in the CIA!

3:20 pm The next juror works "in a prestigious golf club in Toronto." (That's one German, one Canadian, and two Hungarians on the jury.) She is the bartender. Then there is Dave, a former mayor of a small town in New Mexico. He no longer seeks higher office, though, because the consultants he once hired in preparation for a run told him "I had to be something other than what I was." Next: Benji. Manning: "Do you believe there is a witchhunt for Obama because he is black?" Benhi: "I believe there is a witchhunt for the truth." Benji was once registered as a "Dumbocrat" but he voted for Ron Paul.

Manning: "Do you believe that Mr. Obama is simply a puppet?"

3:15 pm Some of the jurors seemed to be unemployed. "I'm in transition from one job to another," one said, though he recently worked in the solar power industry. "Is that green energy," Manning asked him. "Yes, it is," the juror answered.

3:10 pm Manning, to a nervous-seeming woman in thick-framed glasses: "I think we need to inform everyone at the outset that you are a member of this church. I am your pastor." Ok! Then, more disclosures: "You are able to trace your lineage all the way back to the Mayflower." Always important in a potential juror. And: "I have been informed that your lineage also connects you to Barack Obama."

Great moments in impartial jury selection: "Kelly, I'm your pastor," the prosecuting attorney says. "Do you believe that you can be open and fair?" Of course she does! (She is a registered Democrat.)

Kelly has two theories about why Barack Obama's records have all been sealed: they're hiding something, or "they're creating chaos."

3:00 pm A Dr. Kelso was unable to attend today, but she really wants to be on the jury, Manning tells Judge Unger. That seems to be fine with Unger. No one will actually be sworn in until tomorrow anyway.

2:49 pm: Phone dying so I'm going to keep updates light until I find a place to plug in. Still selecting jury. Last guy is not registered to vote but likes Ron Paul.

2:40 pm: I think the current prospective juror said she wrote a thesis that used quantum physics to prove that Jesus Christ could have been incarnate.

2:33 pm: Lotta questioning of whether jurors are afraid for their well-being if they find him guilty.

2:21 pm: Jury selection is taking a while! Manning asks one juror if anyone from the Democratic Party, the CIA, or Homeland Security asked him to act as a disruptive agent or to report on the trial.

Now the world's oldest man is telling us the story of his life. He designed nuclear plants? When he first came to the U.S. from Hungary.

Manning is asking everyone variations on "if the evidence warranted it, could you vote not guilty?" The first guys weren't able to say it, but now everyone's playing along.

2:05 pm: The judge is Bob Unger. (Apparetly, he's running for the Republican congressional nomination in New York's 5th District, which is currently represented by Democrat Gary Ackerman.) Jury selection! First juror isn't playing along with Manning's attempt to make him say he hasn't already made up his mind on the charges. He is sure Obama is guilty.

"So you think he is guilty?" Manning asks

Juror finally says he could be "fair" but he is unwilling to say he could ever find Obama not guilty. Juror is a registered Republican. This will take forever.

1:57 pm: Charges of treason and espionage (the death penalty ones) are all "delineated," to make it easier for the jury to reach a verdict, they say. Manning is now asking the people registered as jurors to come forward for jury selection.

Count 10 is also espionage, this time against Columbia. Count 11 is  espionage, too! Obama will be sentenced to death if it is shown that he aided a foreign state in identifying a US spy or nucelar secrets.

Count 17: violation of New York education law (buying a diploma). Obama was NEVER present on Columbia grounds, according to the indictment! Count 18 is same against Columbia.

Judge Bob something. Will try to get his name again. White guy, with a robe and everything.

1:15 pm: I'm not supposed to take pictures but this is from the stairway to the church basement, where there's a school (creepy) and the kitchen. I dunno what this is about. The lasagna was delicious. Only other press here is a German newspaper reporter. A British man who lives in the neighborhood named Nick is waiting outside bugging people. He says Manning has multiple wives. 11:55 am: Tensions are flaring as pro-Obama neighbors decide to confront trial attendees, who are still waiting outside.

UPDATE: Video of most of the exchange, between neighborhood resident Helen, the assembled birthers, and the neighborhood counterprotest.

The clash breaks out when a neighborhood woman named Helen grows tired of the antics of Anthony Tolda, a trial attendee who is also running against Democratic Rep. Steve Israel as Constitution Party's candidate in a district on Long Island. As his fellow trial attendees are being photographed, Tolda instructs them to "say 'treason.'"

Helen shouts at Tolda for a while, calling him and his fellow ralliers racists. Other neighborhood people began chanting "slave-owners." Helen says to her friend, mockingly, "look at that Tea Party person." More people from the neighborhood begin shouting. Trial attendees charge that they were "sent by ACORN."

A female cop says to a trial-goer, "You in Harlem? They love Obama here."  She seems amused by the whole thing.

The church sign seems to be what's setting people off. It's actually been up for two years.

I'm getting in shortly. Security is nuts. Metal detector, no cameras allowed. Now there's a woman trying to jump in line. She's "registered for this trial" and "works in the courts." A man asks, "What do you do in the courts?"

I talk to a 90-year-old woman who attends services here because Pastor Manning's voice told her to turn the TV to his program one day. She began attending when he said he'd observe the proper sabbath.

Now the larouche people are here talking about Glass-Steagall. No cameras allowed in the church! I'll take notes. I'm finally in.

(Ed. -- Yes, Alex has been shooting video. We won't be able to get it up until after he leaves the church, though.)