The 10 worst moments on "Undateable"

A look at the most inane, confusing and just plain offensive pieces of advice on VH1's clich 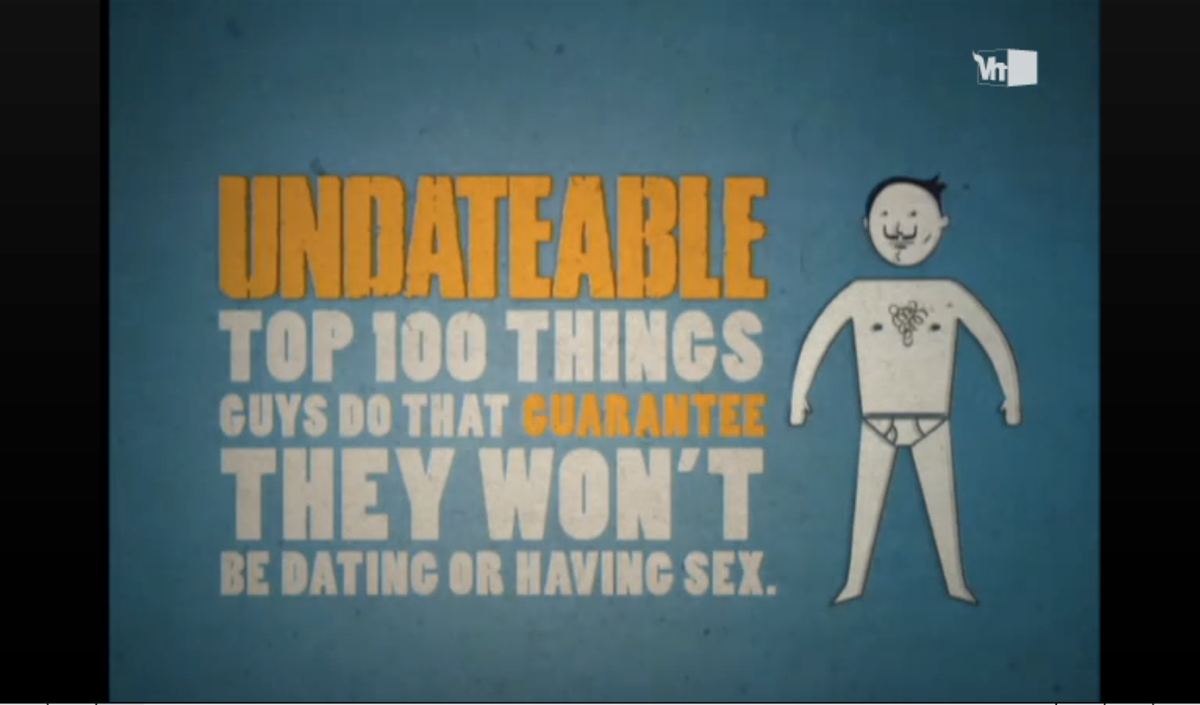 Tonight, VH1 wraps up "Undateable," a week-long series dedicated to the hundred offenses that can render men -- you guessed it! -- apparently unfit for dating. Everything from driving a van to wearing cutoff jean shorts to using the phrase "boo yah!" is enough, according to the set of wisecracking reality stars, obscure comedians and has-been musicians VH1 has on rotation for these specials, to qualify men for lifelong celibacy. Some items on the list of "malelures" (male + failure, and yes, they actually say that)  are just common sense -- -to quote Mary Elizabeth Williams’ post from Tuesday,  "Oh, flatulence and belching don't make a man more attractive? Hold on, I have to get my pen so I can write this shit down!" But far more of it veers somewhere between insufferably sexist and excruciatingly unfunny. In case you actually spend your nights doing productive things, let me break down the worst moments of the show so far.

10.  Pauly D, the "Jersey Shore" cast member most renowned for his insane tattoos and dedication to fist-pumping, doled out fashion tips for all you poor, gym-tan-laundry-less suckers out there. According to Mr. D, emo bangs and wraparound sunglasses make you undateable. A blown-out helmet of gelled hair, though? Chicks just can't get enough!

9. Bad drivers are bad in bed. Who-the-hell-is-that comedienne and talking head Luenell quipped that "If a man drives like a grandma, he probably screws like a grandma!" But then, of course if you drive too fast, you're also a lunatic. Because bad driving is not only gender based, it's also  integrally related to your sexual experience! Get it? Yeah, me neither.

8.  The Barenaked Ladies make fun of guys who wear Christmas sweaters. Guys who live in washed-up rock stars' houses shouldn't throw stones, first, and second, is this actually a problem? Show me a dude who wears a Christmas sweater either non-ironically or out of season, and I will show you a guy who does not watch VH1.

7. Each hour included a helpful, 30-second segment of what women can do to make themselves more dateable. The suggestions include "Don't clutter up the DVR with episodes of 'The View'" and "Don't take your boyfriend shopping." Yeah, those are definitely the things that are deal breakers in relationships for men/reflect the actual behavior of women. At least they're doling out the terrible stereotypes equally to both sexes, I guess.

6. Guys, you know what's hilarious? People who go to Star Trek conventions. Right? I mean, that is some virgin comedic territory right there! And VH1 didn't waste its chance to mine that. In fact, Sir Mix-a-Lot and Brandy spent a whole five minutes berating Trekkies. Except, well, girls go to those conventions too.  If geeky convention-goers were actually undateable, there wouldn't also be an industry devoted to Trekkie weddings.

5.  One comedian likened men who listened to soft rock to date rapists. Yeah, that seems fair. Dudes who want to listen to Yanni instead of AC/DC are probably out to get you. A Y chromosome obviously dictates your love for Lynyrd Skynyrd. Or, you know, they could actually just like the dulcet tones of John Mayer. Weirder things have happened.

4. Making fun of man boobs or "moobs." Yes, it's kind of funny, unless you consider that gynecomastia -- the condition that causes swelling of the mammary tissue -- is an actual disease that's caused by a hormonal imbalance. So Kendra's helpful suggestion that you hit the treadmill won't help.

2. Talking like Eminem is also a one-way road to celibacy, if you're white, at least. This one has racist and sexist implications! Double whammy. Of course, you can get away with it if you're Justin Timberlake. But not K-Fed. Thanks again, Sir Mix-a-Lot.

1. Perhaps the crowning terrible moment was when a battalion of plastic surgery-tweaked pseudo-celebrities proclaimed men with muscle implants undateable. Kendra -- she of the Hugh Hefner entourage and bleached platinum locks -- explained, "You can't grow boobs! Muscles you can hit the gym for." Well, kind of. But that doesn't mean that one cosmetic enhancement is any less elective than the other, or more necessary. Plus, if Kendra's own dating history proves anything, it's that even a 70-something man with several other girlfriends still isn't undateable.