A personal history of e-mail addiction

The need to check my in-box crept up on me. Now, my capacity for distraction is -- wait, what was I saying? 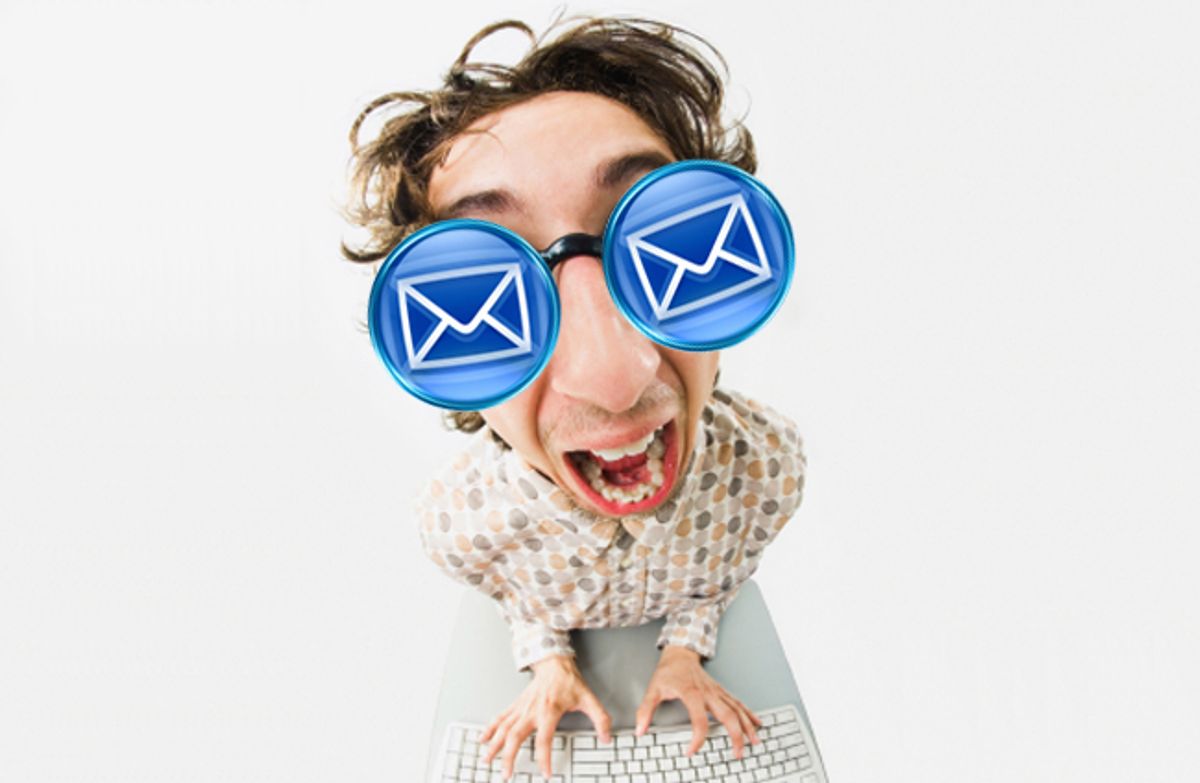 Portrait of funny man screaming during typing a document
--

It took me six days to write this piece, during which (according to the History Tab on my Web browser) I visited 371 websites and checked my e-mail 213 times. I knew the numbers weren't going to be pretty, but I had no idea they'd be quite so ugly.

Let me add, reluctantly, that I have two small children whose emotional and psychological well-being depends, in part, on my being an attentive parent, which is to say a parent who is not actively checking e-mail while bathing them.

Which reminds me: I need to check my e-mail.

[Writer checks his e-mail. Only one new message. A high school student named Amanda writes, "Our teacher just made us read your story 'Moscow.' We have to write a paper. What was the idea behind this story?" Writer sighs.]

Please don't worry. This isn't one of those articles where I announce, "My name is Steve, and I'm a cyber addict," then relate the details of my abusive childhood. Nor will it offer tips on "How to Kick the Internet and Increase Productivity."

I'm just going to try to relate how I got here, which is (I'm guessing) pretty much how you got here, too.

There was this guy, Kenny, who worked as an ad executive at the weekly newspaper where I was a reporter. One day, he started talking about "the Internet."

His face got all flushed with messianic ardor. "It's like if someone was coming to, like, Miami, for a vacation and they want to know where to eat or, like, what club to go to or whatever, they plug in an address on their computer and all these pictures and reviews pop up!"

We all thought Kenny was crazy.

How did one "plug an address" into a computer? Was there a special slot? And why would someone go to all that trouble? That's why we had newspapers and guidebooks and telephones. We were simpler creatures then. Computers were socially static objects. They existed primarily for the compilation and transfer of data, not emotions or entertainment. They were a desk, not a window.

These were my grad school years, which consisted of me sitting around excreting wretched short stories, nearly all of which I mailed out to literary magazines. The highlight of my day was walking outside to get "the mail" and its retinue of "rejections." Later, I would get stoned and ponder how to locate the authors of these rejections and "kill" them.

I don't remember exactly when e-mail entered the picture, but I remember that it required a trip to the library. Most of my e-mails were brief notes to my girlfriend, a Polish exchange student who had returned home. We saved the dirty stuff for letters. The new technology felt sort of governmental and shady. I later printed out every note I'd ever received from her, so I could have a permanent record.

This was the heart of the Internet boom and a good friend of mine was at the center of it, having launched the company that was supposed to become the AOL of Latin America. He, too, got messianic when he discussed the Internet. But he had $35 million in funding, so people listened.

I moved to Somerville, Mass. -- my fifth city in as many years -- and worked part-time teaching composition. If I went out at night, it was usually alone. I tended to speak a great deal and often stupidly at parties, which is to say I was slow to make friends.

When I look back on this time, I can see that I was an Internet addict waiting to happen: socially isolated, needy, impatient, narcissistic, increasingly computer-dependent. It turned out I was part of a growing demographic: upwardly mobile nomads on a slow retreat from the inconveniences of actual life.

The only reason I didn't become a full-blown junkie is because I was using a dial-up modem. And because of my profound laziness (which I may have underemphasized above), along with a rather primitive view of technology, the dial-up was poor quality.

Still, I could feel a slow but inexorable shift. Where I had once devoted an hour to composing a letter, I was now firing off a dozen electronic notes, light on details and heavy on banter.

As in all blooming infatuations, the rush was quite real. I felt it every time I opened my in box. Was someone going to send me a note that might rescue me for a few minutes? That I had done something worth praising, that I was understood? In a world so scattered, this was not a false hope, or even a foolish one.

But it soon devolved into a compulsion. If I got no "good" messages, I would have to check again. And if I did get a good message, well, that was all the more reason to check again. None of these exchanges were improving my life beyond e-mail. On the contrary, they were fortifying my isolation. The sound of my old modem, with its micro-symphony of blips and skronks, never failed to rouse my blood. But I could also hear within it the song of modern loneliness.

Tired of viruses and delays and long, fruitless conversations with tech support staffers who quite obviously hated me, I bought an Apple and activated the machine's supercharged internal modem. Things went downhill quickly.

But now I had this vast universe of distraction in which to hide from the bad data of my actual life. Something lurid was always happening online. And I myself was a known and desirable figure, a kind of celebrity of my own construction.

There were millions of us living in this confused nexus between avatar and identity. We were all braver and wittier and better-looking on the Internet. (When we met online friends or colleagues in person we were almost always disappointed.)

As an author, I could justify my addiction by telling myself I was establishing "an online presence." So I got myself a website, a second e-mail box, a personalized browser. My computer now served as an office, TV set, singles bar, and (last but not least) self-activated ego masseuse.

I comforted myself with the self-aggrandizing lies of all addicts. I don't have a mobile device. I'm not on Facebook. I only have two e-mail boxes. But I knew there was something unnatural happening to me, that my life was becoming increasingly frantic and fragmented.

I was spending more time in front of my computer than with the human beings in my life. What exactly was I doing? Well, some of it was work. But mostly, I was flailing about for affirmation, simmering in grievance, rubbernecking the various scandals intended to obscure my own idiocy.

These were not the uses envisioned by Internet pioneers, whose outlook was utopian and almost touchingly naive. They saw the "World Wide Web" as a means of building community, democratizing access to data, and speeding its transfer.

What they failed to anticipate was the power of late-model capitalism to monetize the medium. The essential currency online is attention -- the more eyeballs you get, the more dough you make. All those nifty mobile devices and social media sites and lurid news aggregators and hyperlink rabbit holes? They're the business model. The Internet's job is not to educate or connect you, in other words, but to keep you on a treadmill of ego need and stimulation. The faster you run, the harder it is to get off the machine.

I figured having children would supply a sense of purpose and connection that would render enticements meaningless. And it did -- for the first few months of my children's lives.

But I had underestimated how monotonous it is to be a parent, how much patience it requires, and how little it curbs your worst impulses. Gradually, I've found myself falling back into the old habits -- the incessant e-mail checks, the trolling for quick hits of vanity or malice, the whole masturbatory cycle.

Part of the reason I'm writing this piece now is precisely because I can see that my kids are being affected. My 1-year-old, in particular, gets frantic when he sees me or my wife working on the computer. A part of him wants to touch the shiny box. But he also senses us being pulled away from him and toward something else. All the kid is asking for is what he deserves: our undivided attention.

That may be the most precious of our dwindling resources, in the end. It's why we turned to the Internet in the first place, for some sign that people out there know us, love us, that our story matters. From here on out, though, the computer stays upstairs in my office.