The girl who conquered the world

Why we can't get enough of Stieg Larsson's hacker heroine 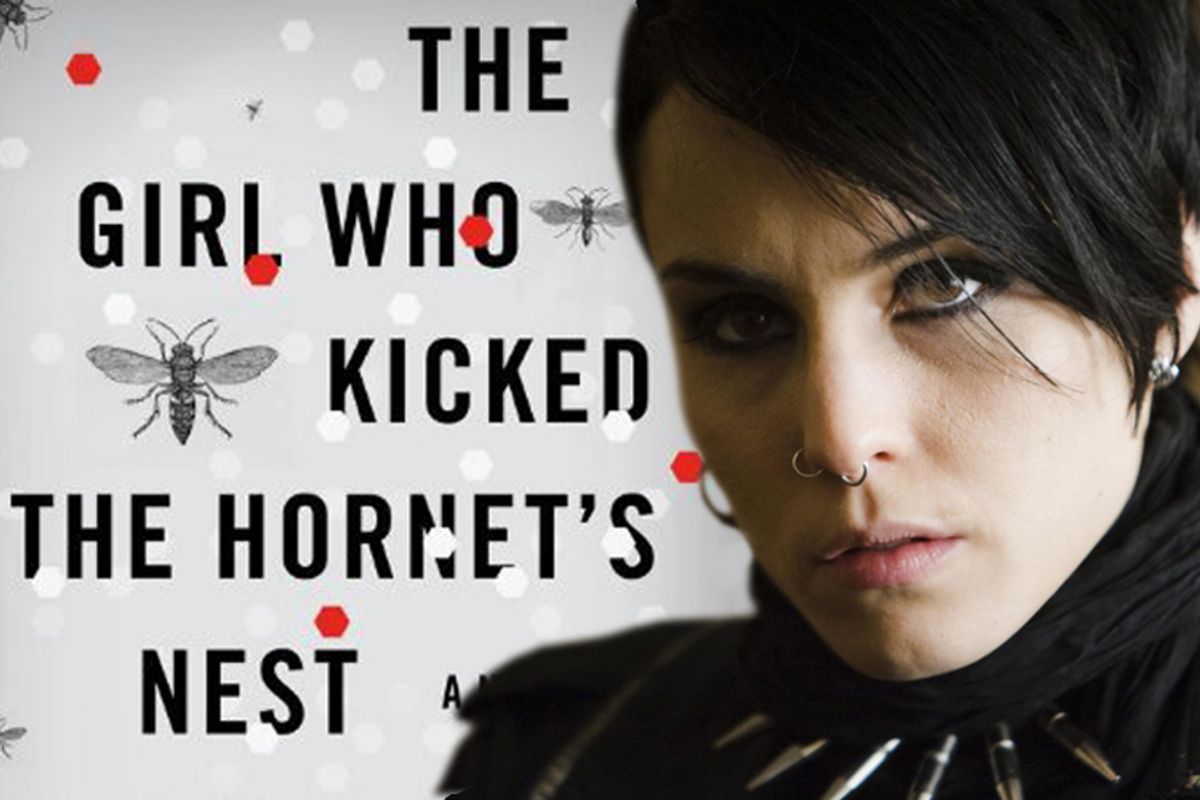 Can anyone be seriously contemplating reading "The Girl Who Kicked the Hornet's Nest" who hasn't already read the two previous novels in Stieg Larsson's bestselling Millennium Trilogy, "The Girl With the Dragon Tattoo" and "The Girl Who Played With Fire"? And can there be a reader of those first two books who hopes to resist the third? Anyone who has succumbed to Larsson fever knows what it is to lavish the waking hours of entire weekends on his weirdly matter-of-fact and even more weirdly addictive fiction, surfacing at the end of the binge, bleary-eyed and underfed, wondering what just happened.

So let this installment of What to Read address the Millennium Trilogy as a whole and ponder the secret of its appeal. Certainly the charm doesn't lie in Larsson's prose; it's as flat and featureless as the Scandinavian landscape it ought to be evoking (but doesn't). Those who have proved immune to the Larsson virus protest that the books are filled with clichés, but that presumes the author to be reaching for more color than he is. There are not a lot of hearts pounding or chills running down spines in "The Girl Who Kicked the Hornet's Nest." As Larsson went along, he almost entirely jettisoned the dime-store thriller theatrics; a heart does occasionally "sink like a stone" in the third book, but such moments are few and far between.

Which is not to say that his writing became more terse and economical. If anything, "Hornet's Nest" luxuriates in even more of the pointlessly meticulous, step-by-step detail that marked the first two novels. Here's how one character begins her day:

She blinked a few times and got up to turn on the coffeemaker before she took her shower. She dressed in black pants, a white polo shirt, and a muted brick-red jacket. She made two slices of toast with cheese, orange marmalade and a sliced avocado, and carried her breakfast into the living room in time for the 6:30 television news. She took a sip of coffee and had just opened her mouth to take a bite of toast when she heard the headlines.

I should point out that this is a supporting character briefly introduced in the earlier books, and while she plays a more significant role in this novel, there's really no reason to so exhaustively describe her morning. It's the sort of thing that drives the Larsson naysayers nuts, and even some fans have been known to complain that certain portions of the books "drag." So let me now testify: I love this stuff, although why, exactly, has long been something of a mystery to me.

My favorite part of "The Girl With the Dragon Tattoo" (after the scene where Lisbeth Salander triumphs over the court-appointed guardian who abused her) is the part where crusading journalist Mikael Blomkvist sets up, box by box, a research office in a little cabin on a remote Swedish island. My favorite part of "The Girl Who Played with Fire" (after the chapter where Salander infiltrates the bad guys' security system) is when she goes to Ikea to furnish her secret hideout and Larsson lists every last thing she buys there.

Of course, I couldn't bear to read 500-odd pages of Swedish people munching on toast and buying reasonably priced plastic wastebaskets if that's all there was to it — if it weren't for Salander, the titular "girl" and the core of what a marketing director might (and for all I know already does) refer to as "the franchise." Larsson begins each of the four parts of "The Girl Who Kicked the Hornet's Nest" with a few paragraphs of canned factoids about women warriors in ancient and modern history, but Salander is not really a warrior. Like Larsson, she reserves a special hatred for misogynists (the Swedish title of the first novel in the trilogy translates literally as "Men Who Hate Women"), but unlike the activist and leftist journalist who created her, she is no crusader or soldier. What motivates Salander is not justice, but revenge.

A folklorist once told me that revenge is the root of all narrative; few stories have more immediate practical utility to the teller than the brutal causality of "That man wronged me, and this is how I punished him for it." You might expect a Nordic writer, someone emerging from a culture whose earliest literature is all about seeking retribution, to be acutely aware of this. For some reason, though, Larsson's examples of fighting females are all taken from the classical world and the American Civil War, instead of the shieldmaidens of Scandinavian lore, who (besides Pippi Longstocking) would seem to be Salander's logical precedent.

This is primitive stuff, and by the time you get to the beginning of "The Girl Who Kicked the Hornet's Nest," with Salander surviving both a bullet wound in the head and being buried alive in a shallow grave, there's a dangerous drift toward Tarantino country. What keeps Salander from turning into a cartoon like the Bride from "Kill Bill" is the unedited-documentary-footage texture of the novel's narration. It's this integration of the mundane and the mythic that enables the trilogy to hold its readers in thrall.

The antagonists in the first novel were corporate; in the second they were organized criminals and their accomplices. "The Girl Who Kicked the Hornet's Nest" beards the ultimate villains in their den: abusers of legitimate state authority, specifically the Swedish Security Service, or Säpo, the national police. "I don't believe in collective guilt," says Blomkvist, that authorial sock puppet, and so Larsson takes great care to illustrate that the "system" isn't inherently to blame, but rather individuals who warp it for their own ends.

The climax of "Hornet's Nest" is, naturally, a trial. Salander, who long ago (and with good cause) lost any faith in institutions or official authority, is vendetta personified, confronting the Enlightenment institution of the rule of law. One side is so satisfying, so charismatic, so immediately appealing to our instinctive sense of right and wrong; the other, as Larsson himself was no doubt aware, is the only thing keeping us from descending back into the bloody world of the Icelandic sagas. It's a contest that still captivates us because we all feel those warring impulses within ourselves. The story may be ancient, but somehow it never gets old.