My new range is shiny and fancy, and breathes fire like no other. But it's not made for real cooks 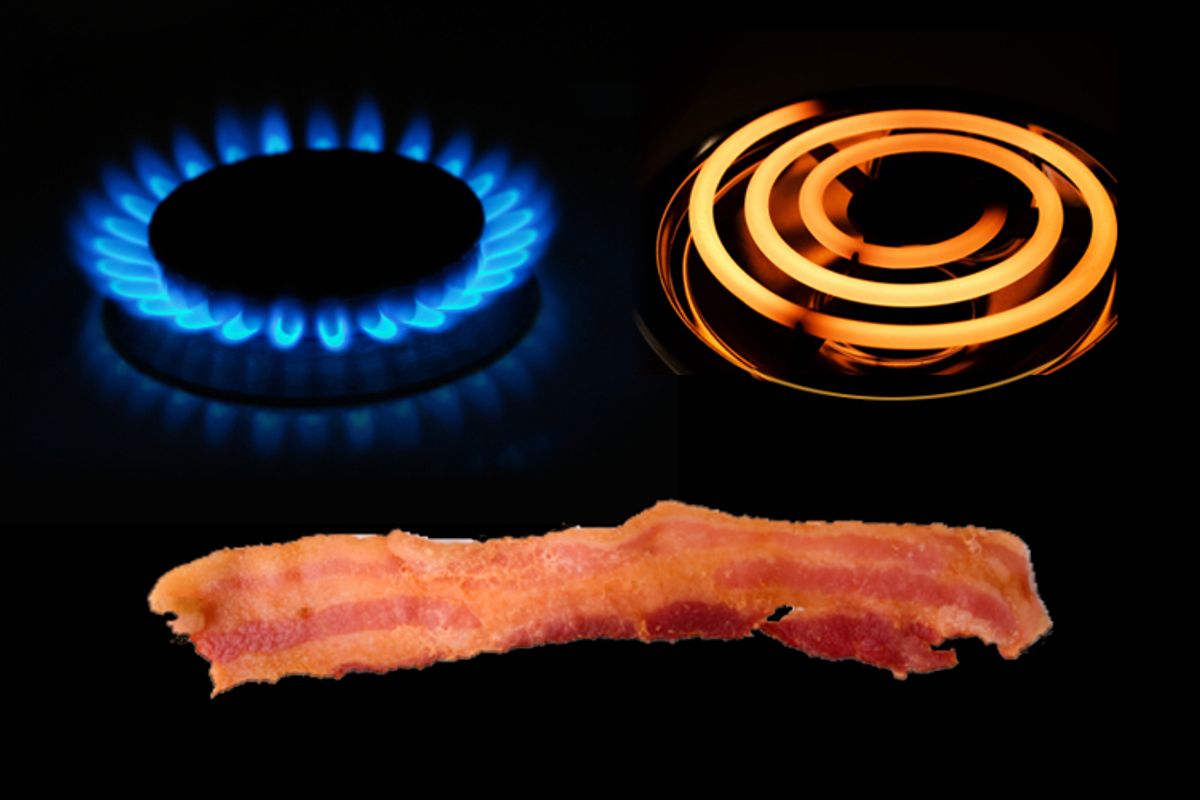 A few years ago, my white White-Westinghouse stove was down to two and a half burners -- one of the four burners was dead, another dying -- and a demanding chef friend was due in a few weeks to prepare a wedding dinner for 80 (my wedding). The White-Westinghouse had been a local deal, and back then I hadn't worried much about the quality of a stove, because I planned to do a lot of fireplace cooking, something that hasn't happened for reasons unrelated to stoves. I was proud of my three fading burners in a Luddite way, proud of not owning a "yuppie" stove. But we badly needed a new stove. I did some quick research, and we bought a brand-new, pricy, six-burner, stainless-steel range with oven. The new stove did its job and the wedding meal went beautifully. The old stove had been no miracle of design in any sense. But of course you don't need a great stove to cook well, and it certainly won't do much to help you cook better. Really, it just helps you cook more food faster. When we still had that old stove, I could put a cast-iron frying pan on a burner, turn the meager heat to high, wait 10 minutes, add fat and a steak, and the meat would brown deeply, gorgeously -- quickly; it could be cooked beautifully. When I wanted to braise on the old stove, having only a little ring of low flames was an advantage.

Let me say now that the powerful heat of six big burners is completely spoiling. I admit it would be hard to go back. Who wants to wait 10 minutes for a pan to heat up? Who wants to watch water boil?

And yet, what do you get besides impressive heat? The outer two cast-aluminum grates that support pots and pans slope slightly toward the center, so fat for sautéing pools on one side. And the grates have optically misleading spokes, so when the pot looks centered on the flame, it isn't. Above, the warming shelf sticks out so as to block the light shining down from the matching hood, leaving the back burners in the dark. The rings of flame of all six burners are identical and wide enough that they don't allow the center of a pan to get as hot as the rest, which becomes obvious when, say, you fry a big panful of hamburgers and the one in the middle doesn't brown and cook like the others. With small pans, this is a bigger problem, because the sides become the hottest part, so whatever splashes on them browns and often burns. One or two smaller rings would have made much more sense. Or the manufacturer might have offered a cast-iron, flat-top range with variable heat (such as the Aga has), still a favorite of chefs -- and a few old Vermonters use wood cookstoves like that. Or the jets of each burner could have been arranged in a star pattern, like those of the old Garland stoves, now called BlueStar, with a very narrow diameter flame at the lowest setting. (And those star burners are open, rather than sealed all around, perhaps allowing a more even flow of heat.)

The oven beneath our range is "dual-fuel" -- an electric element on the bottom is combined with a gas broiler on top. For baking bread, electric ovens are generally superior; they hold in the humidity crucial for expansion and crust because they don't have the "chimney" required by gas. Our dual-fuel oven, though not nearly as bad as the all-gas ones I've known, does have a flow-through vent. A more serious concern is that the top broiler comes on when the oven is preheating (so the large space comes to temperature faster), and it also comes on when the oven setting is raised by more than about 25 degrees F at a time. If, from old habit, you happen to forget about that ferocious broiler, you blacken whatever you have in the oven. With my old oven, I could put in certain foods while it was heating, and like many cooks I sometimes need to raise the heat while something is cooking. There are recipes that call for one or the other (popover batter is sometimes started in a cold oven, for instance).

When we first got the stove, pizza would cook beautifully on a baking stone placed opposite the convection fan, which is located dead center on the back. However, a loaf of bread or anything nonflat (I remember a grim soufflé) received a blast of drying heat on one side, which cooked way too fast and too much. Yes, you can rotate things, but you don't want to open the door in the early part of bread-baking, and no amount of rotating will solve the problem of drying. And with an expensive appliance, do you want to be a human turntable? We had the convection fan disabled, but the oven's heat is still uneven for reasons I haven't tried to understand. Our pizza is nearly as good as it ever was, baked with the heat at 500 degrees F.

To bring on further regrets, soon after we bought the new stove, friends of ours finished building a new house, and they installed a commercial Vulcan stove at about one-sixth the price of ours. (For the record, we have a Dacor, and current models may not have the same problems.) It was the difference in price that hit home. Their stove also has powerful burners, and they love it, although it doesn't have a broiler, and if you're not careful you can burn yourself opening the oven door -- definitely not the thing for children. I haven't lived with that Vulcan so I don't know all its good and bad points, but being an uninsulated commercial model, for fire safety it requires four inches of clearance all around, which would have been impossible for us.

I had heard that the primary market for fancy stainless-steel stoves is affluent people who rarely cook and may never notice any shortcomings. Still, we assumed the practical aspects of a high-priced stove had been mostly if not entirely thought through. Eventually, we'll replace our stove. What we'd like is one designed and used over and over by someone who loves to cook, if that exists.

For more on the Art of Eating, visit the artofeating.com.