As a Princeton senior, Kagan explained why radical politics failed in the U.S. What does that prove? She's smart! 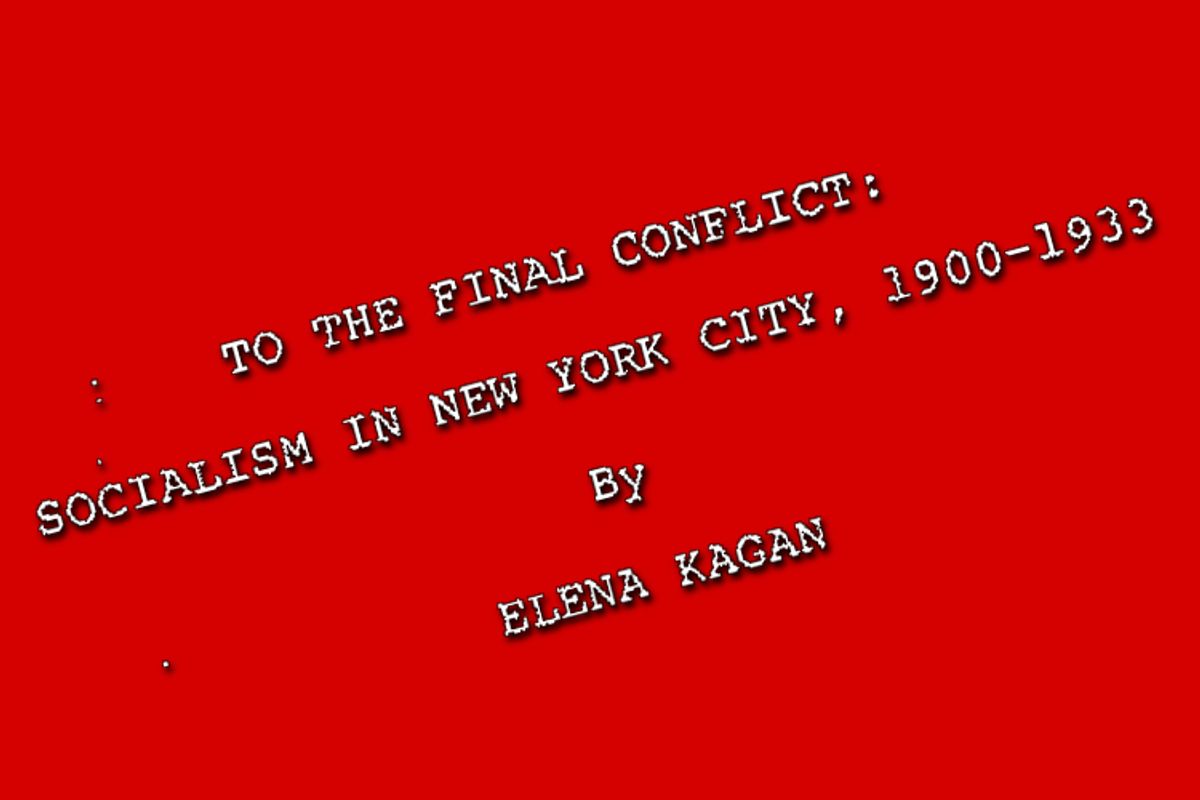 Elena Kagan, the nominee for Supreme Court justice who has so successfully managed not to leave a paper trail indicating what she really thinks about anything important, turns out to have written her senior thesis at Princeton on an interesting question: Why did socialism fail to become a major force in the United States?

This has led, predictably, to an uproar on right-wing blogs, where it is being argued with great passion that "To the Final Conflict: Socialism in New York City, 1900-1933" is proof that Elena Kagan is herself a living, breathing socialist.

Media Matters promptly responded to the outcry with a set of talking points declaring that just because someone writes a college paper about socialism doesn't automatically mean that she is a socialist. That's certainly true, but I don't think it means we can't learn something about Kagan -- or, better yet, the failure of socialism in the United States -- from reading her paper. If Kagan had chosen to write about why the Confederacy lost the War of Northern Aggression, that would have provided a meaningful insight into her intellectual interests. But she didn't -- she wrote about the abject failure of the Socialist Party to become a significant political force in the United States. Let's take that at face value.

I'm ashamed to say I've only read the introduction, first and last chapters, and conclusion of Kagan's 130-page thesis. But I think I can nonetheless say without fear of contradiction: "To the Final Conflict" is a first-rate piece of work. (Does that make me a socialist? Maybe.) If anyone is actually taking seriously the notion that Kagan is some Harriet Miers-like "mediocrity," her college thesis alone should be enough to quash that nonsense. Kagan proves herself a superb writer who grounds her argument in scrupulous attention to historical detail. She's also tackling an important topic: Why, after a promising start in the early part of the 20th century, did socialism wither away in the United States? If I had been a Princeton professor reviewing her submitted work, I can only imagine that my reaction would have been: This woman is going places.

Kagan tells the fascinating story of how the Socialist Party of New York grew quickly in the early part of the 20th century, hand in hand with the rise of powerful garment worker unions. Both the party and the unions were  dominated by immigrant Jews who had been radicalized by their experiences in Europe, but faced miserable working conditions and poverty in the "promised land" of the United States. (It's worth noting: As the granddaughter of Jews who immigrated to New York from Eastern Europe, Kagan's interest in the experiences and politics of that community has a personal tinge that does not require her to assume part-and-parcel, their entire ideological apparatus.)

Kagan makes a pretty good case that sectarian bickering and factionalism doomed the Socialist Party to irrelevance. The leaders of the New York Socialist Party embraced a  moderate, accommodationist approach to improving worker conditions that put them at odds with rank-and-file workers who tended to be more militant.  This made it easy for Communist Party organizers to infiltrate the garment worker unions and challenge the Socialist Party leadership's control. Ultimately, a disastrously mishandled strike destroyed the credibility of both the Socialist and Communist factions, and worker demands for better conditions were sublimated into Roosevelt's New Deal.

Meanwhile, those formerly militant trade unionists who remained within the ILGWU had lost much of their passion for radical politics. These members had watched as the Communist Party subordinated their battle to a seemingly irrelevant connection to the Bolsheviks. They had watched as the socialists resorted to unconstitutional suspensions and overt alliances with the capitalist class in order to remove the left-wing threat. They had watched as communists and socialists alike hired gangsters and thugs to keep straying members in line and pull defecting ones back into it. In the process, these workers had seen their fondest radical hopes and dreams utterly destroyed.

This is good stuff, even if I think that Kagan underplays the role that Roosevelt's New Deal played in co-opting socialist militancy. Who can say what would have happened had Roosevelt failed to aggressively respond to the Great Depression? Sustained 25 percent unemployment might have trumped political infighting, and reradicalized workers. The New Deal legitimized union organizing to an extent never possible before in the United States, and delivered real improvements in worker livelihoods. Was a powerful Socialist Party necessary in such a context?

Political axes to grind aside, there is clearly room to wonder where Kagan's own sympathies lie. Her acknowledgments thank her "brother Marc, whose involvement in radical causes led me to explore the history of American radicalism in the hope of clarifying my own political ideas." And in the conclusion she writes:

In our own times, a coherent socialist movement is nowhere to be found in the United States. Americans are more likely to speak of a golden past than of a golden future, of capitalism's glories than of socialism's greatness. Conformity overrides dissent; the desire to conserve has overwhelmed the urge to alter. Such a state of affairs cries out for explanation. Why, in a society by no means perfect, has a radical party never attained the status of a major political force? Why, in particular, did the socialist movement never become an alternative to the nation's established parties? [...]

The story is a sad but also a chastening one for those who, more than half a century after socialism's decline, still wish to change America. Radicals have often succumbed to the devastating bane of sectarianism; it is easier, after all, to fight one's fellows than it is to battle an entrenched and powerful foe. Yet if the history of Local New York shows anything, it is that American radicals cannot afford to become their own worst enemies. In unity lies their only hope.

Frankly, I would be more alarmed if a smart college senior did not want to "change America," in 1981 or in 2010. To look at the state of the world as it currently exists and not think that it can be improved betrays a failure of imagination. Judging from her thesis, that does not appear to be a character flaw one can accuse Kagan of displaying. I think we can infer from Kagan's thesis that, at least while still in college, she looked favorably upon the prospect of workers organizing to improve their working conditions, and that she frowned upon the spectacle of political infighting at the expense of concrete progress. That would make her a pragmatic liberal. I suppose a psychotherapist could even make a flying leap from her emphasis on "unity" to her ostensible support of presidential executive power, but that seems a bit of a stretch.

What the thesis proves, most of all, is that as a young woman Elena Kagan was an incisive thinker, good historian, and liked to engage with big, important issues. We could do worse.