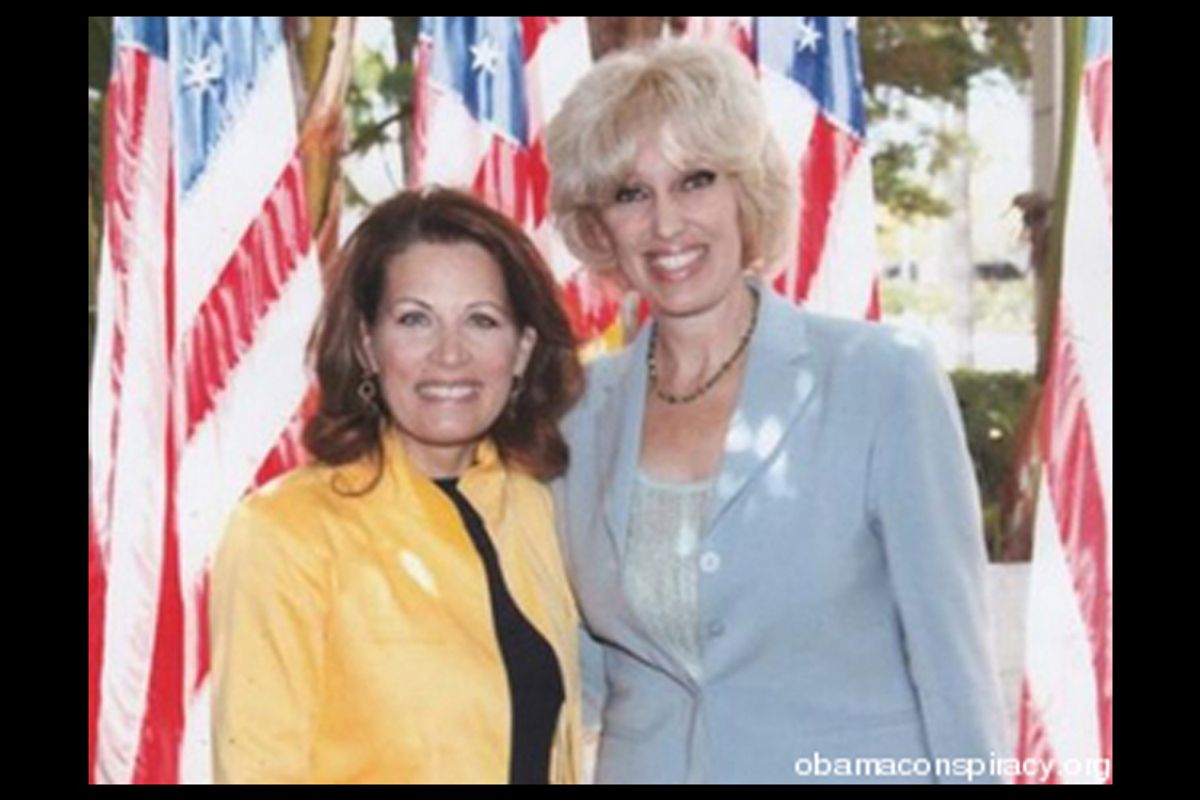 The Tea Party Patriots invited both of them to speak at a lunch in California on Friday. Taitz claims Birtherism didn't come up, but that's literally the only thing she talks about, so I'm not sure if I believe her. Like, this is how she claimed that she didn't talk about Birtherism:

"I spoke at the lunch, however I did not speak about ongoing legal actions involving Obama's use of ss number 042-68-4425, which was assigned to another individual, I also did not talk about Obama's refusal to unseal his original birth certificate, currently sealed in HI or any other issues of Obama' illegitimacy to presidency which are raised in the pleadings. I talked only about my candidacy for the position of the Secretary of State of CA."

Bachmann -- an elected official whose willingness to repeat any anti-Obama email forward she reads makes her a regular cable news guest -- hanging out with Taitz, a legitimately crazy person whose crusade against Obama is even beginning to embarrass other birthers, is just another example of the Republican Party's tacit endorsement of the fringe conspiracy nuts.

Coincidentally, professional word-typer and second-dumbest-person-at-The Corner Jonah Goldberg wrote about the Birthers today! He thinks the 9/11 Truthers are worse, and they are liberal Democrats, so they get a "pass" from the MSM.

I've written on the essential differences between Birthers and Truthers before. But to sum up: there are far more Republican Birthers than there are Democratic Truthers. The Birther movement is tacitly (and occasionally openly) supported and encouraged by members of the Republican leadership ranging from elected officials to major media figures, while no respectable Democrats endorse Truther claims. The MSM treats both of them as ridiculous, and has worked equally hard to debunk the claims of both groups. Meanwhile, the conservative alternative media generally tolerates Birtherism, while I can't think of a major liberal site that allows even a hint of Trutherism. And, personally, I find the Birther conspiracy slightly more ridiculous.

This, obviously, is where Jonah and I disagree. He finds it "not that crazy" ("in the abstract," whatever the fuck he thinks that phrase means) (I think he thinks it is just a handy way to not take full responsibility for your words when you're in the middle of writing an incredibly stupid sentence) to believe that the president of the United States is ineligible for office because he was secretly born in another country.

Here's my position: It's completely preposterous to argue that the government murdered thousands of people in cold blood (and then successfully covered up those murders) in order to launch a war. But the US government has lied to get us into a war before. I think a lot of sympathy for Truthers on the left is simply a misguided extension of the suspicion, based in part on actions like stonewalling the 9/11 commission, that the Bush administration covered up information about pre-attack intelligence and its actions and response that day.

But there's no historical precedent for a Kenyan pretending to be a natural-born citizen in order to one day assume the presidency under false pretenses. There's no reason to believe his birth certificate is fake or void or that false birth announcements were "planted" in two separate newspapers for reasons unknown.

In other words, one is a ridiculous expression of oft-justifiable suspicion of the government. The other is just just a bunch of loons looking for some sort of fact-based hook for their unease with a black president.

But the "your crazies are less crazy than our crazies" argument is beside the point. Whichever group is crazier (and plenty of people, like Alex Jones, are both!), the fact remains that here we have an elected Republican almost literally embracing a Birther. Call me, Jonah, when Barney Frank cozies up to Dylan Avery.