The trial of President Obama, Part 2

"This is not about racism. It just happens that Mr. Obama is alleged to be black" 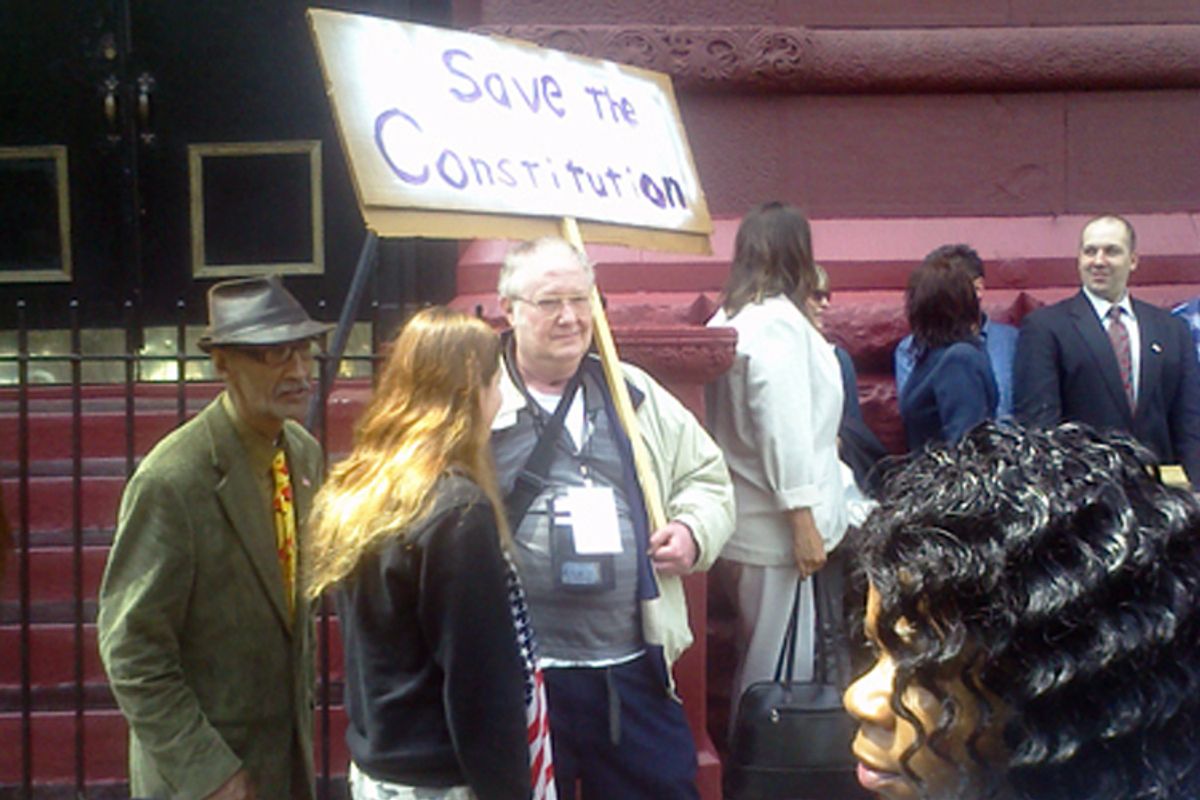 This is Part 2 of my report on the ATLAH World Ministries trial of Barack Obama. Part 1 ran on Friday. For my mostly unedited live coverage of the day, click here.

"He's got multiple wives," Matt told me. Matt, a film student, was taping the mostly quiet exterior of the church. He's working on a documentary about the Rev. Dr. James David Manning, and his increasingly weird ATLAH church in Harlem.

Matt had asked me what my initial impression of Manning was. He seemed charismatic, I said, and everyone connected to his church had been as nice as can be. "He's got another side," Matt said, echoing what a neighbor had told me earlier. I didn't have time to get into it -- I had to get back through the metal detector and into the church for jury selection.

A few years ago, Manning made headlines locally by announcing a boycott of Harlem businesses, ostensibly to fight gentrification. Meanwhile, he was opening a grocery store of his own. At the trial, lunch was offered for a nominal fee, and I picked up a card for ATLAH's catering service as I waited for my turkey and spinach lasagna. (Lunch, by the way, was held in the church basement, which is obviously used as a school.) I think Manning's a typical huckster preacher who discovered there's a lot more fame and glory in attaching yourself to a national political cause than simply leading a flock of local believers in wars against wealthy interlopers.

As we all settled back in and waited for the trial to begin, attendees who saw me taking notes stopped to chat. They shared an instinctual distrust of the media coupled with an urgent need to get their stories out to the people. They asked me to report the "unbiased" truth as they saw it -- that 30,000 veterans protected the Vietnam memorial from anarchists at an Iraq war counter-protest (a Washington Post reporter came around but he didn't report the size of their party accurately), that it's the liberals who are confrontational and violent.

The Rev. Michael Hahn (the older, well-dressed white gentleman in the confrontation video who says he attends an all-black church) told me the president's so-called birth certificate is void because the numbers are blacked out. He suspects (though he admitted that it's "hearsay") that the president became a citizen only once he married Michelle Obama. He wanted me to look into it. "I believe God puts people in my presence for good things," he said.

We rose for the judge. Bob Unger, an unctuous lawyer in a bad rug who's running for Congress in Queens as a Republican, entered in a black robe, sat behind a desk, urged us to remain orderly, and began reading the indictment. There were 20 charges, ranging from treason and espionage to mail fraud and violation of New York education statutes. Half were against Obama, the other half against Columbia University.

Manning, now acting as prosecuting attorney, told us that the biggies -- espionage and treason -- would be "delineated" (dropped) from the indictment. Considering that this was supposed to be Barack Obama's treason trial, that was a bit of a disappointment. But Manning got in a spot of trouble for seeming to threaten the president's life some time ago, and he's treading as carefully as a crazy person can. The jury would not be deliberating on whether to execute the president.

Sixty-five people registered to be jurors. Thankfully, only 13 showed. The jury selection process was long, repetitive and only occasionally amusing. Manning made a show of asking each juror, in as many different ways as possible, whether he or she could possibly manage to be fair and impartial. Obviously all of these people had showed up because they believed that Barack Obama is a usurper. The very first juror questioned, Kurt, did not seem to understand that for the purposes of this farce, he had to play along.

Kurt announced that he was already certain of Obama's guilty.

"Do you think you could be convinced otherwise based on the evidence?" Manning asked.

"Even though you may have a strong sense of his guilt, we need to know if you could possibly find him not guilty."

Kurt still didn't know how to answer. "Everything's coming at me so fast."

After an assist from Unger, they managed to convince Kurt to say he'd be "fair." The ritual was repeated with each juror, but they eventually got it.

More important than establishing fairness was instilling the proper sense of paranoia. "Your pictures will be placed in some unsavory places," Manning warned the jurors. "And some historic and patriotic places."

He asked Billy: "Have you been contacted by any member of the Democratic Party, the CIA, or the Department of Homeland Security," to act as an agent and "report on this trial and thereby derail it?"

Everyone bravely said they were unafraid. One man, a deacon, announced that he'd been to "The Waco Memorial 16 years in a row. So the government knows me." This led Manning into an odd aside about David Koresh.

"The American press presented that as a runaway preacher with a crazy group of people that deserved to die," Manning said. "Do you think that some in the media might say that I'm a runaway preacher?" (Well, sure.)

The deacon desperately wanted to be a juror, but back home in Texas, his wife was about to have surgery. This struck me as more than a little bit sad -- that he'd rather be participating in a mock trial than caring for his wife. But it inspired a bit of levity from "Judge" Unger. "He asked you if you were afraid of the government. He didn't ask you if you were afraid of your wife!" (This joke got such a good response that Unger tried several more times to bring up the deacon's wife.)

Manning knows how to flatter white reactionaries into thinking their unease with Obama is justified. When a charismatic black preacher gives you a pass on your racial issues, you feel a lot more confident telling the world that you've had it bad, too, and you don't expect any "special treatment."

Manning's parochial concerns (against gentrification, against Columbia University) slightly confused the visiting Birthers, but they were game for just about anything. "Were you aware," he asked one potential juror, "of any statements about Obama not attending Columbia before this trial?" He wasn't, but he was willing to buy one more conspiracy theory, as long as he was here.

(According to Manning's theory, Obama was a CIA operative while he was supposedly attending Columbia.)

Juror Bill inadvertently summed up the entire Birther movement. Manning asking him, "Do you believe that one way or another that I have a personal vendetta against President Obama? And that I am seeking some sort of glory?"

And Bill said: "Most of us are here because we sensed a deception of some sort." Watching this foreign-seeming black man make his way into the White House with the support of millions of supposed Americans back in 2008, Bill was not sure what this deception actually was, but he just knew, in his gut, that something was wrong.

Finally, Manning made his opening statement. (The jury -- all 13 members -- would be sworn in tomorrow, because a friend of Manning's who really wanted to be on the jury was unable to make it that day. Also Judge Unger would not be around on Saturday, but a Constitution Party candidate for governor would be sitting in as judge.)

No evidence of wrongdoing was ever introduced. We did learn that George Washington and John Jay inserted the natural-born clause into the Constitution in order to prevent something like this from ever happening. We learned that "this is not about racism. It just happens that Mr. Obama is alleged to be black." We were told that some would call us "barbaric names," but that the best way to deal with Mr. Obama was not to challenge him on his policies, but to go after his very right to hold office. The Illuminati were brought up, as part of the cabal of puppet-masters who made Obama president in the first place.

We learned that even John McCain was implicated in the conspiracy.

And finally we learned that we could not try Obama for treason because some time ago Manning told "some Tea Party people" that instead of fighting the healthcare bill, they should go after Obama for capital crimes, because "if he's found guilty of treason and sedition then he should be executed." This, supposedly, led to a visit from the CIA. So Manning wanted to make it very clear that he does not plan on personally executing the president after the trial is over. (He also wanted to make it clear that, personally, he still believes the president should be "hanged from his toes" until dead.)

Dr. King was referenced and paraphrased. The glory of the cause was invoked. "I believe that when we marched on Columbia yesterday and today, that this presidency ended, effectively."

And martyrdom was hinted at. Manning is not afraid to die for this cause.

"We should not be afraid of loss of our job, or loss of our friendship, or any other kind of losses when we're serving a cause as great as America."

Manning said God had just recently spoken to him. The Lord said to the reverend that "our shoes are our weapons." And they'd be back at Columbia tomorrow morning, to keep fighting the war.

It looks like the rest of the trial is proceeding in much the same fashion.